Frieze on the memorial to the Stratford Martyrs

The Stratford Martyrs were a group of eleven men and two women who were burned at the stake together for their Protestant beliefs, at Stratford-le-Bow or Stratford near London in England on 27 June 1556, during the Marian persecutions. 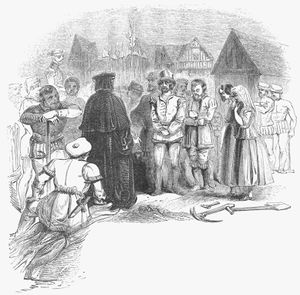 A detailed description of the event is in John Foxe's book, The Acts and Monuments.[1] Foxe lists those executed: Henry Adlington, a sawyer of Grinstead, Laurence Pernam, a smith of Hoddesdon, Henry Wye, a brewer of Stanford-le-Hope, William Halliwel, a smith of Waltham Holy Cross, Thomas Bowyer, a weaver of Great Dunmow, George Searles, a tailor of White Notley, Edmund Hurst, a labourer of Colchester, Lyon Cawch, a Flemish merchant of the City of London, Ralph Jackson, a servant of Chipping Ongar, John Derifall, a labourer of Rettendon, John Routh, a labourer of Wix, Elizabeth Pepper of Colchester who was pregnant, and Agnes George of West Bergholt. A further three men, Thomas Freeman, William Stannard, and William Adams, were given a dispensation by Cardinal Pole, the Archbishop of Canterbury for reasons that remain unclear.[1]

The sixteen accused had been brought to Newgate in London from various parts of Essex and Hertfordshire. There, beginning on 6 June 1556, at an ecclesiastical tribunal under the direction of Thomas Darbyshire, the chancellor of Edmund Bonner the Bishop of London, they were charged with nine counts of heresy, to which they all either assented or remained silent. All of them were condemned to death and later published a letter detailing their beliefs in rebuttal of a sermon that had been preached against them by John Feckenham, the Dean of St Paul's. On the 27 June, the remaining thirteen were brought from London to Stratford, where the party was divided into two and held "in several chambers". Here, the sheriff unsuccessfully attempted to persuade each group to recant, by telling them falsely that the other group had already done so.[1]

The executions were said to have been attended by a crowd of 20,000. The exact place of the execution is unknown; the most likely site is thought to have been Fair Field in Bow (then known as Stratford-le-Bow), north of the present day Bow Church DLR station.[2] An alternative location is Stratford Green,[3] the last remnant of which became the site of the Parish Church of St John the Evangelist.[4] According to Foxe, "eleven men were tied to three stakes, and the two women loose in the midst without any stake; and so they were all burnt in one fire".[1] 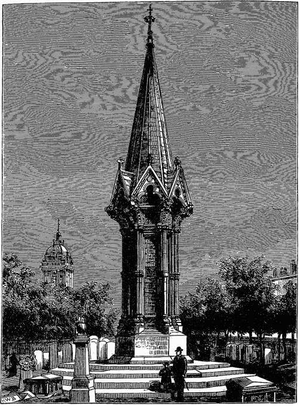 A contemporary engraving of The Martyrs' Memorial in the churchyard of St John the Baptist Church, Stratford, which was unveiled by Lord Shaftesbury on 2 August 1879.

In 1879, a large monument was erected in St John's churchyard in Stratford Broadway, to commemorate the thirteen and others who were executed or tortured in Stratford during the persecutions. Designed by J T Newman, it consists of an ornate hexagonal column, capped with a twelve-sided spire rising to a height of 65 feet. One side of the column carries a terra cotta plaque, sculpted in relief, based on the illustration of the martyrdom in Foxe's book. The other panels carry the names of the thirteen martyrs, together with Elizabeth Warne (burnt 23 August 1555), Stephen Harwood (burnt 30 August 1555), Hugh Laverock and John Apprice (both burnt 15 May 1556). Also included are Patrick Packingham, who was actually executed at Uxbridge and the Reverend Thomas Rose, the Vicar of West Ham, who "was tortured and exiled for preaching against auricular confession, transubstantiation, purgatory and images".[5] The memorial is a Grade II Listed building.[6]

The monument was paid for by public subscription; the chairman of the appeal committee was Rev. William Jay Bolton, the Vicar of Stratford. It was inaugurated in a ceremony on 2 August 1879, presided over by the Earl of Shaftesbury, who made a strongly anti-Catholic speech. The opinion of The Graphic, a national weekly newspaper, was that "Language of this sort is better calculated to wound the feelings of many good people than to break down barriers that already too effectually divide the different denominations."[7]