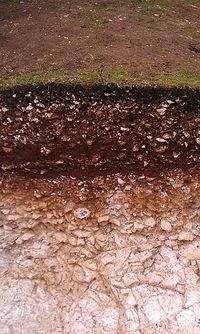 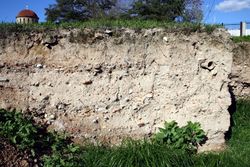 Stratigraphy is a key concept to modern archaeological theory and practice. Modern excavation techniques are based on stratigraphic principles. The concept derives from the geological use of the idea that sedimentation takes place according to uniform principles. When archaeological finds are below the surface of the ground (as is most commonly the case), the identification of the context of each find is vital in enabling the archaeologist to draw conclusions about the site and about the nature and date of its occupation. It is the archaeologist's role to attempt to discover what contexts exist and how they came to be created. Archaeological stratification or sequence is the dynamic superimposition of single units of stratigraphy, or contexts.

Contexts are single events or actions that leave discrete, detectable traces in the archaeological sequence or stratigraphy. They can be deposits (such as the back-fill of a ditch), structures (such as walls), or "zero thickness surfaciques," better known as "cuts." Cuts represent actions that remove other solid contexts such as fills, deposits, and walls. An example would be a ditch "cut" through earlier deposits. Stratigraphic relationships are the relationships created between contexts in time, representing the chronological order they were created. One example would be a ditch and the back-fill of said ditch. The temporal relationship of "the fill" context to the ditch "cut" context is such that "the fill" occurred later in the sequence; you have to dig a ditch before you can back-fill it. A relationship that is later in the sequence is sometimes referred to as "higher" in the sequence, and a relationship that is earlier, "lower," though this does not refer necessarily to the physical location of the context. It is more useful to think of "higher" as it relates to the context's position in a Harris matrix, a two-dimensional representation of a site's formation in space and time.

The principle of superposition establishes that within a series of layers and interfacial features, as originally created, the upper units of stratification are younger and the lower are older, for each must have been deposited on, or created by the removal of, a pre-existing mass of archaeological stratification.

The principle of original horizontality states that any archaeological layer deposited in an unconsolidated form will tend towards a horizontal deposition. Strata which are found with tilted surfaces were so originally deposited, or lie in conformity with the contours of a pre-existing basin of deposition.

The principle of lateral continuity states that any archaeological deposit, as originally laid down, will be bounded by the edge of the basin of deposition, or will thin down to a feather edge. Therefore, if any edge of the deposit is exposed in a vertical plane view, a part of its original extent must have been removed by excavation or erosion: its continuity must be sought, or its absence explained.

Understanding a site in modern archaeology is a process of grouping single contexts together in ever larger groups by virtue of their relationships. The terminology of these larger clusters varies depending on the practitioner, but the terms interface, sub-group, and group are common. An example of a sub-group could be the three contexts that make up a burial; the grave cut, the body, and the back-filled earth on top of the body. Sub-groups can then be clustered together with other sub-groups by virtue of their stratigraphic relationship to form groups, which in turn form "phases." A sub-group burial could cluster with other sub-group burials to form a cemetery, which in turn could be grouped with a building, such as a church, to produce a "phase". Phase implies a nearly contemporaneous Archaeological horizon, representing "what you would see if you went back to time X".The production of phase interpretations is the first goal of stratigraphic interpretation and excavation.