From Infogalactic: the planetary knowledge core
Jump to: navigation, search
This article is about the area of common ground in South London. For the nearby railway station, see Streatham Common railway station. 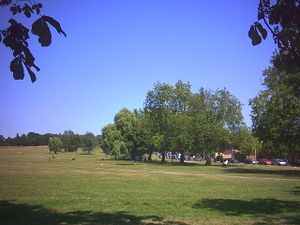 Streatham Common is a large open space on the southern edge of Streatham in the London Borough of Lambeth. It has been designated a Local Nature Reserve.[1][2]

It is one of two former areas of common land in the former parish of Streatham. The other is now known as Tooting Bec Common. After enclosure, the Common was purchased for use as a public open space under the powers conferred under the Metropolitan Commons Act 1878. The Common was conveyed to the Metropolitan Board of Works and was subsequently administered by the London County Council and Greater London Council before maintenance responsibility passed to the London Borough of Lambeth in 1971.

The Common had a long tradition of cricket playing from the 18th century, and the right to play cricket is enshrined in the Supplementary Act that brought the common into public ownership.

As well as the historic common, there is also an adjacent formal garden, The Rookery, laid out on the site of one of Streatham's historic mineral wells. The Rookery is well known for its old cedar trees and White Garden designed in the same style as that at Sissinghurst Castle. The gently sloping lawns of The Rookery are used as an open-air theatre in the summer.

The south east end of Streatham Common and Rookery Gardens abut Norwood Grove within the London Borough of Croydon to form part of a larger series of green spaces along the ridge line from Streatham to Crystal Palace.

There is a Management Advisory Committee, which is promoting a Management Plan for the conservation of the Common and Rookery Gardens. A separate Friends of Streatham Common group promotes events on the Common and in the Rookery, including a very successful annual kite festival.

Streatham Common was recently saved from threat of a "temporary" ice rink being built on it while Tesco's re-develop the site of the former Streatham ice rink by a vigorous local campaign.