Streets Run is a 5.2-mile-long (8.4 km)[1] tributary of the Monongahela River in Allegheny County, Pennsylvania. This urban stream drains portions of the communities of Pittsburgh, Baldwin, Brentwood, West Mifflin and Whitehall,[2] an area of about ten square miles. 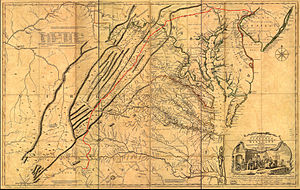 Streets Run, previously referred to as Licking Creek, is depicted in A map of the most inhabited part of Virginia containing the whole province of Maryland with part of Pensilvania, New Jersey and North Carolina, drawn by Joshua Fry and Peter Jefferson in 1751, and published by Thos. Jefferys, London, 1755. This landmark map, unusual in that it relied on firsthand surveys, is the first correct depiction of the Allegheny Mountains, complete with "The Great Road from the Yadkin River thro Virgionia to Philadelphia distant 455 Miles" - an accurate survey of what would come to be styled the Great Philadelphia Wagon Road.

James Hardin Hays began mining coal along Streets Run in 1828. Other coal mines in the watershed were run by the I.D. Risher and Daniel W Risher Companies, as well as the Harrison Gas Coal Company.

The H.B. Hays and Brothers Coal Railroad ran along Streets Run to service the mine developed by J.H. Hays. It ended at Six Mile Ferry, on the Monongahela.[3] The Pittsburgh Southern Railroad and its successor, the Baltimore and Ohio Railroad,[4] also had lines running though the valley. The Whitehall Tunnel connects this valley with the Peters Creek watershed.