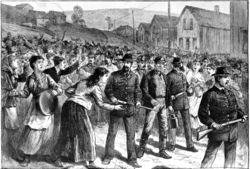 A strikebreaker (sometimes derogatorily called a scab, blackleg, or knobstick) is a person who works despite an ongoing strike. Strikebreakers are usually individuals who are not employed by the company prior to the trade union dispute, but rather hired after or during the strike to keep the organization running. "Strikebreakers" may also refer to workers (union members or not) who cross picket lines to work.

Strikebreakers are employed worldwide, often occurring wherever workers go on strike or engage in related actions. However, strikebreakers are used far more frequently in the United States than in any other industrialized country.[1] The Mohawk Valley formula calls for the use of strikebreakers when dealing with striking employees.

The ILO has also concluded striker replacement, while not in contravention of ILO agreements, carries with it significant risks for abuse and places trade union freedoms "in grave jeopardy."[5][6] 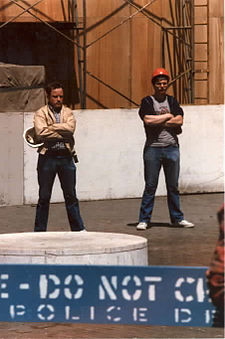 Strikebreakers outside the Chicago Tribune during a 1986 strike

Strikebreaking is also known as "black-legging" or "blacklegging". American lexicographer Stephanie Smith suggests that the word has to do with bootblacking or shoe polish, for an early occurrence of the word was in conjunction with an 1803 American bootmaker's strike.[15] But British industrial relations expert J.G. Riddall notes that it may have a racist connotation, as it was used in this way in 1859 in the United Kingdom: "If you dare work we shall consider you as blacks..."[16] Lexicographer Geoffrey Hughes, however, notes that "blackleg" and "scab" are both references to disease, as in the blackleg infectious bacterial disease of sheep and cattle caused by Clostridium chauvoei. He dates the first use of the term "blackleg" in reference to strikebreaking to the United Kingdom in 1859. Hughes observes that the term was once generally used to indicate a scoundrel, a villain, or a disreputable person.[17]

Hughes notes that the use of the term "scab" can be traced back to the Elizabethan era in England, and is much more clearly rooted in the concept of disease (e.g., a diseased person) and a sickened appearance.[17]