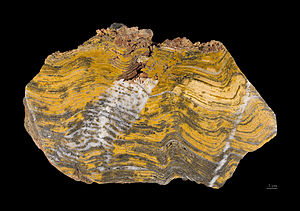 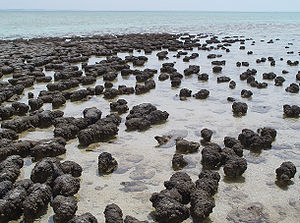 Stromatolites or stromatoliths (/stroʊˈmætoʊlaɪts/; from Greek στρώμα, strōma, mattress, bed, stratum, and λίθος, lithos, rock) are layered bio-chemical accretionary structures formed in shallow water by the trapping, binding and cementation of sedimentary grains by biofilms (microbial mats) of microorganisms, especially cyanobacteria.[1] Fossilized stromatolites provide ancient records of life on Earth by these remains, which might date from more than 3.5 billion years. Lichen stromatolites are a proposed mechanism of formation of some kinds of layered rock structure that is formed above water, where rock meets air, by repeated colonization of the rock by endolithic lichens.[2][3] 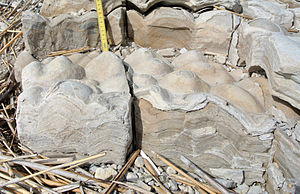 A variety of stromatolite morphologies exists, including conical, stratiform, branching, domal,[4] and columnar types. Stromatolites occur widely in the fossil record of the Precambrian, but are rare today. Very few ancient stromatolites contain fossilized microbes. While features of some stromatolites are suggestive of biological activity, others possess features that are more consistent with abiotic (non-biological) precipitation. Finding reliable ways to distinguish between biologically formed and abiotic stromatolites is an active area of research in geology.[5]

Time lapse photography of modern stromatolite formation in a laboratory setting gives some revealing clues regarding varied cumulative structures observed in nature. Due to intense UV (ultraviolet) radiation during the day, the stromatolitic bacteria restrict their vigorous activity to night time. Fine grain sediments are bound together by excretions, adhered atop one another by the bacteria's flagella, forming layers that correspond to periods of high activity. Thus these sometimes elaborate structures, constructed by microscopic organisms working somewhat in unison, are a means of providing shelter and protection from a harsh environment.

Some Archean rock formations show macroscopic similarity to modern microbial structures, leading to the inference that these structures represent evidence of ancient life, namely stromatolites. However, others regard these patterns as being due to natural material deposition or some other abiogenic mechanism. Scientists have argued for origin due to stromatolites due to the presence of organic globule clusters within the thin layers of the stromatolites, of aragonite nanocrystals (both features of current stromatolites),[5] and because of the persistence of an inferred biological signal through changing environmental circumstances.[clarification needed][6][7] 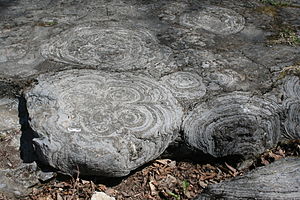 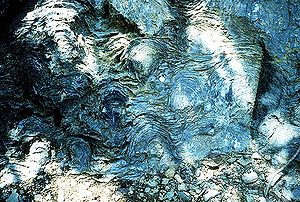 Stromatolites are a major constituent of the fossil record of the first forms of life on earth.[8] The earliest fossils date to 3.5 billion years ago. They peaked about 1.25 billion years ago[6] and subsequently declined in abundance and diversity,[9] so that by the start of the Cambrian they had fallen to 20% of their peak. The most widely supported explanation is that stromatolite builders fell victim to grazing creatures (the Cambrian substrate revolution); this theory implies that sufficiently complex organisms were common over 1 billion years ago.[10][11][12]

Proterozoic stromatolite microfossils (preserved by permineralization in silica) include Cyanobacteria and possibly some forms of the eukaryote chlorophytes (that is, green algae). One genus of stromatolite very common in the geologic record is Collenia.

While prokaryotic cyanobacteria reproduce asexually through cell division, they were instrumental in priming the environment for the evolutionary development of more complex eukaryotic organisms.[8] Cyanobacteria (as well as extremophile Gammaproteobacteria) are thought to be largely responsible for increasing the amount of oxygen in the primeval earth's atmosphere through their continuing photosynthesis. Cyanobacteria use water, carbon dioxide, and sunlight to create their food. A layer of mucus often forms over mats of cyanobacterial cells. In modern microbial mats, debris from the surrounding habitat can become trapped within the mucus, which can be cemented together by the calcium carbonate to grow thin laminations of limestone. These laminations can accrete over time, resulting in the banded pattern common to stromatolites. The domal morphology of biological stromatolites is the result of the vertical growth necessary for the continued infiltration of sunlight to the organisms for photosynthesis. Layered spherical growth structures termed oncolites are similar to stromatolites and are also known from the fossil record. Thrombolites are poorly laminated or non-laminated clotted structures formed by cyanobacteria, common in the fossil record and in modern sediments.[5]

The Zebra River Canyon area of the Kubis platform in the deeply dissected Zaris Mountains of south western Namibia provides an extremely well exposed example of the thrombolite-stromatolite-metazoan reefs that developed during the Proterozoic period, the stromatolites here being better developed in updip locations under conditions of higher current velocities and greater sediment influx.[15] 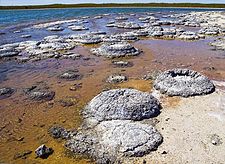 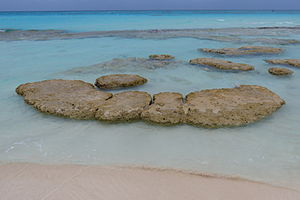 Stromatolites at Highborne Cay, in the Exumas, The Bahamas

Modern stromatolites are mostly found in hypersaline lakes and marine lagoons where extreme conditions due to high saline levels exclude animal grazing. One such location is Hamelin Pool Marine Nature Reserve, Shark Bay in Western Australia where excellent specimens are observed today, and another is Lagoa Salgada ("Salty Lake"), in the state of Rio Grande do Norte, Brazil, where modern stromatolites can be observed as bioherm (domal type) and beds. Inland stromatolites can also be found in saline waters in Cuatro Ciénegas, a unique ecosystem in the Mexican desert, and in Lake Alchichica, a maar lake in Mexico's Oriental Basin. The only open marine environment where modern stromatolites are known to prosper is the Exuma Cays in the Bahamas.[16][17]

In 2010, a fifth type of Chlorophyll, namely Chlorophyll f was discovered by Dr. Min Chen from stromatolites in Shark Bay.[18] 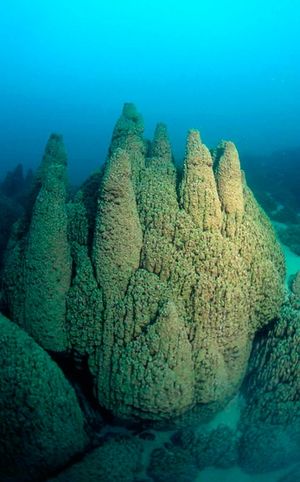 Laguna Bacalar in Mexico's southern Yucatán Peninsula in the state of Quintana Roo, has an extensive formation of living giant microbialites (that is, stromatolites or thrombolites). The microbialite bed is over 10 km (6.2 mi) long with a vertical rise of several meters in some areas. These may be the largest sized living freshwater microbialites, or any organism, on Earth.[19]

A little further to the south, a 1.5 km stretch of reef-forming stromatolites (primarily of the Scytonema genus) occurs in Chetumal Bay in Belize, just south of the mouth of the Rio Hondo and the Mexican border.[20]

Freshwater stromatolites are found in Lake Salda in southern Turkey. The waters are rich in magnesium and the stromatolite structures are made of hydromagnesite.[21]

Another pair of instances of freshwater stromatolites are at Pavilion and Kelly Lakes in British Columbia, Canada. Pavilion Lake has the largest known freshwater stromatolites and has been researched by NASA as part of xenobiology research.[22] NASA, the Canadian Space Agency and numerous universities from around the world are collaborating on a project centered around studying microbialite life in the lakes. Called the "Pavilion Lake Research Project" (PLRP) its aim is to study what conditions on the lakes' bottoms are most likely to harbor life and develop a better hypothesis on how environmental factors affect microbialite life. The end goal of the project is to better understand what condition would be more likely to harbor life on other planets.[23] There is a citizen science project online called "MAPPER" where anyone can help sort through thousands of photos of the lake bottoms and tag microbialites, algae and other lake bed features.[24]

Microbialites have been discovered in an open pit pond at an abandoned asbestos mine near Clinton Creek, Yukon, Canada.[25] These microbialites are extremely young and presumably began forming soon after the mine closed in 1978. The combination of a low sedimentation rate, high calcification rate, and low microbial growth rate appears to result in the formation of these microbialites. Microbialites at an historic mine site demonstrates that an anthropogenically constructed environment can foster microbial carbonate formation. This has implications for creating artificial environments for building modern microbialites including stromatolites. 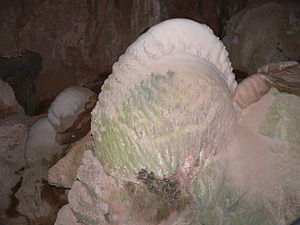 A very rare type of non-lake dwelling stromatolite lives in the Nettle Cave at Jenolan Caves, NSW, Australia.[26] The cyanobacteria live on the surface of the limestone, and are sustained by the calcium rich dripping water, which allows them to grow toward the two open ends of the cave which provide light.[27]

Stromatolites composed of calcite have been found in both the Blue Lake in the dormant volcano, Mount Gambier and at least eight cenote lakes including the Little Blue Lake in the Lower South-East of South Australia.[28]