A struggle session (simplified Chinese: 批斗会; traditional Chinese: 批鬥會; pinyin: Pī Dòu Huì) was a form of public humiliation and torture used by the Communist Party of China in the Mao Zedong era, particularly during the Cultural Revolution, to shape public opinion and to humiliate, persecute, or execute political rivals and class enemies.[1]

In general, the victim of a struggle session was forced to admit to various crimes before a crowd of people who would verbally and physically abuse the victim until he or she confessed. Struggle sessions were often held at the workplace of the accused, but were sometimes conducted in sports stadiums where large crowds would gather if the target was famous enough.[1]

During Mao's leadership, the Chinese people attended many different types of struggle sessions, sometimes consisting of 100,000 people. During the 1950s when Mao's Government began the Land Reform movement, poorer peasants seized the land from their landlords, who were given the title of exploiting class (simplified Chinese: 剥削阶级; traditional Chinese: 剝削階級; pinyin: bōxuē jiējí), and an estimated 2 million landlords were swiftly executed after being subjected to a struggle session.[citation needed] 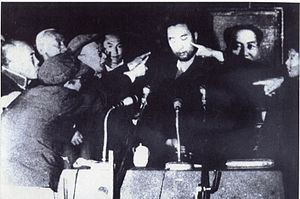 The Tibetan Panchen Lama during a struggle session.

Struggle sessions developed from similar ideas of criticism and self-criticism in the Soviet Union from the 1920s. The term refers to class struggle; the session is held to benefit the target, by eliminating all traces of counterrevolutionary, reactionary thinking. Chinese Communists resisted this at first, because struggle sessions conflicted with the Chinese concept of saving face, but struggle sessions became commonplace at Communist Party meetings during the 1930s due to public popularity.[2]

Anne F. Thurston, in Enemies of the People, gave a description of an infamous struggle session for the professor You Xiaoli:

Lately, the term "struggle session" has come to be applied to any scene where victims are publicly badgered to confess imaginary crimes under the pretext of self-criticism and rehabilitation[citation needed].

In September 2013, Xi Jinping has taken his "criticism and self-criticism" campaign on the road, attending a series of meetings where Hebei provincial cadres were made to admit shortcomings and offer ideas for correcting their behaviour. Xi has instructed regional officials to "promote self-criticism and criticism" to implement his "mass line" campaign, which he said is necessary to eliminate formality, bureaucracy, hedonism and extravagance among rank-and-file cadres.[5]