The Stuart period of British history usually refers to the period between 1603 and 1714 and sometimes from 1371 in Scotland. This coincides with the rule of the House of Stuart, whose first monarch of Scotland was Robert II but who during the reign of James VI of Scotland also inherited the throne of England. The period ended with the death of Queen Anne and the accession of George I from the House of Hanover. The Stuart period was plagued by internal and religious strife, and a large-scale civil war.

The English Civil War(s) took place during the reign of Charles I, the second Stuart monarch. The war ended in victory for the Parliamentarians. Charles was executed in 1649.

After this conflict, the line of Stuart monarchs was temporarily displaced by the Commonwealth of England. Their rule lasted from 1649 to 1660. Oliver Cromwell ruled directly from 1653 to 1658. After Cromwell's death the Commonwealth fell apart. The Convention Parliament welcomed Charles II, son of Charles I, to return from war and become king. This event was known as the English Restoration.

The Anglo-Dutch Wars were a series of three wars which took place between the English and the Dutch from 1652 to 1674. English defeats forced Charles II to sign for peace and led to Dutch domination of sea trading routes until 1713.[1]

Historians have long regarded the overthrow of King James II in 1688 as a decisive break in English history, especially as it made Parliament supreme over the King. Pincus argues that this revolution was the first modern revolution; it was violent, popular, and divisive. He rejects older theories to the effect that it was an aristocratic coup or a Dutch invasion. Instead, Pincus argues it was a widely supported and decisive rejection of James II. The people could not tolerate James any longer. He was too close to the French throne; he was too Roman Catholic; they distrusted his absolutist modernisation of the state. What they got instead was the vision of William of Orange, shared by most leading Englishmen, that emphasized consent of all the elites, religious toleration of all Protestant sects, free debate in Parliament and aggressive promotion of commerce. Pincus sees a dramatic transformation that reshaped religion, political economy, foreign policy and even the nature of the English state.[2][3]

The House of Stuart produced six English monarchs who ruled during this period. 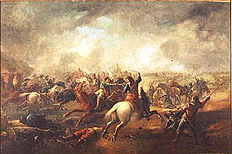 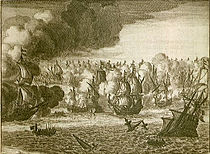 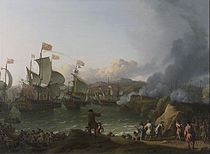 Battle of Marston Moor, English and Dutch fleets engage on St. James Day, and the Battle of Vigo Bay (left to right).