From Infogalactic: the planetary knowledge core
Jump to: navigation, search
Not to be confused with Scholium Generale. 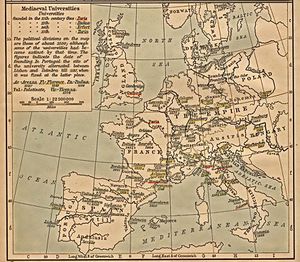 Map of Medieval Universities in Europe, up to c.1500.

Studium generale is the old customary name for a medieval university in medieval Europe.

In the 13th century, the term gradually acquired a more precise (but still unofficial) meaning as a place that (1) received students from all places, (2) taught the arts and had at least one of the higher faculties (that is, theology, law or medicine) and (3) that a significant part of the teaching was done by masters.[2]

A fourth criterion slowly appeared: a master who had taught and was registered in the Guild of Masters of a Studium Generale was entitled to teach in any other studium without further examination. That privilege, known as jus ubique docendi, was, by custom, reserved only to the masters of the three oldest universities: Salerno, Bologna and Paris. Their reputations were so great that their graduates and teachers were welcome to teach in all other studia, but they accepted no outside teachers without an examination.

Pope Gregory IX, who, seeking to elevate the prestige of the papal-sponsored University of Toulouse, which he had founded in 1229, issued a bull in 1233, allowing Masters of Toulouse to teach in any studium without an examination. It consequently became customary for studia generalia, eager to elevate themselves, to apply for similar bulls. The older universities at first disdained requesting such privileges themselves, feeling their reputation was sufficient. However, Bologna and Paris eventually stooped down to apply for them too, receiving their papal bulls in 1292.[3]

Arguably, the most coveted feature of the papal bulls was the special exemption, instituted by Pope Honorius III in 1219, which allowed teachers and students to continue reaping the fruits of any clerical benefices they might have elsewhere. That dispensed them from the residency requirements set out in Canon Law.[4] As this privilege was granted only to those in studia generalia, certainly routinely by the 14th century, it began to be considered by many to be not only another (fifth) criterion but the definition of a studium generale" . (Although the old universities of Oxford and Padua, which resisted asking for a papal bull, had sufficient reputation to be referred to as studium generale without a bull, Oxford masters were not allowed to teach in Paris without examination. Oxford reciprocated by demanding examinations from Paris masters and ignoring the papal privileges Paris enjoyed.)

Finally, the pope could issue bulls guaranteeing the autonomy of the university from the interference of local civil or diocesan authorities, a process that had begun with the issuing of the 1231 bull for the University of Paris. Although not a necessary criterion, to bestow the "privileges of Paris" to other studia generalia became customary.

The pope was not the only supplier of privileges. The Holy Roman Emperor also issued imperial charters granting much the same privileges, starting with the University of Naples in 1224.

A universal student body, one or more higher faculties, teaching by masters, the right to teach in other Studia, retention of benefices, autonomy: those were common features in studia generalia. In other respects (structure, administration, curriculum etc.), studia generalia varied. Generally speaking, most tended to copy one of two old models: the student-centred system of Bologne or the master-centered structure of Paris.

Most of the early studia generalia were found in Italy, France, England, Spain and Portugal, and these were considered the most prestigious places of learning in Europe. The Vatican continues to designate many new universities as studia generalia, although the popular significance of this honour has declined over the centuries.

As early as the 13th century, scholars from a studium generale were encouraged to give lecture courses at other institutes across Europe and to share documents, and this led to the current academic culture seen in modern European universities.

The universities generally considered as studia generalia in the 13th century were:

Universities officially recognized as studia generalia in the 14th century were several, among these:

Today studium generale is primarily used within a European university context as a description for lectures, seminars and other activities which aim at providing academic foundations for students and the general public. They are in line with the humanistic roots of the traditional universities to reach outside of their boundaries and provide a general education.

In the early post-war years in Germany the concept was re-introduced,[5] for example, with a formal programme begun in 1948 at the Leibniz College[6] of University of Tübingen.

Today the term is often used interchangeably with orientation year and may be regarded as the academic equivalent of a Gap year.

A studium particulare tended to take local students. A studium generale, by contrast, would take students from all regions and all countries.[7]