From Infogalactic: the planetary knowledge core
Jump to: navigation, search
This article is about the swelling of an eylid. For the enclosure for raising pigs, see Sty. For other meanings, see Sty (disambiguation).

An external stye or sty /ˈstaɪ/, also hordeolum /hɔːrˈdiːələm/, is an infection of the sebaceous glands of Zeis at the base of the eyelashes, or an infection of the apocrine sweat glands of Moll.[1] External styes form on the outside of the lids and can be seen as small red bumps. Internal styes are infections of the meibomian sebaceous glands lining the inside of the eyelids. They also cause a red bump underneath the lid with only generalized redness and swelling visible on the outside. Styes are similar to chalazia, but they tend to be smaller and more painful, and they usually don't cause any lasting damage. They contain water and pus, and the bacteria will spread if the stye is forcefully ruptured. Styes are characterized by an acute onset and usually short in duration (7–10 days without treatment) compared to chalazia, which are chronic and usually do not resolve without intervention. Styes are usually caused by the Staphylococcus aureus bacterium.[2] 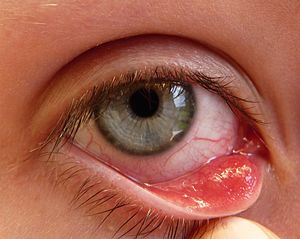 Stye on lower part of the eye

The first sign of a stye is a small, yellowish spot at the center of the bump that develops as pus expands in the area.[3]

Other stye symptoms may include:

Stye complications occur in very rare cases. However, the most frequent complication of styes is progression to a chalazion that causes cosmetic deformity, corneal irritation, and often requires surgical removal.[6] Complications may also arise from the improper surgical lancing, and mainly consist of disruption of lash growth, lid deformity or lid fistula. Styes that are too large may interfere with one's vision.

Eyelid cellulitis is another potential complication of eye styes, which is a generalized infection of the eyelid. Progression of a stye to a systemic infection (spreading throughout the body) is extremely rare, and only a few instances of such spread have been recorded.[7]

Although styes are harmless in most cases and complications are very rare, styes often recur. They do not cause intraocular damage, meaning they do not affect the eye. Styes normally heal on their own by rupturing within a few days to a week causing the relief of symptoms, but if it does not improve or it worsens within two weeks, a doctor's opinion should be sought. Few people require surgery as part of stye treatment. With adequate treatment, styes tend to heal quickly and without complications.

The prognosis is better if one does not attempt to squeeze or puncture the stye, as infection may spread to adjacent tissues. Also, patients are recommended to call a doctor if they encounter problems with vision, the eyelid bump becomes very painful, the stye bleeds or reoccurs, or the eyelid or eyes becomes red.[8]

Styes are most commonly caused by the blocking of an oil gland at the base of the eyelash. Although they are particularly common in teenagers, styes are experienced by people of all ages. Styes can be triggered by poor nutrition, sleep deprivation, lack of hygiene, lack of water, and rubbing of the eyes.[9] Sharing of washcloths or face towels should be curtailed to avoid spreading the infection between individuals.[10][11] Styes can last from one to two weeks without treatment, or as little as four days if treated properly.[12]

Stye prevention is closely related to proper hygiene. Proper hand washing can reduce the risks of developing not only styes, but also many other types of infections.

Upon awakening, application of a warm washcloth to the eyelids for one to two minutes may be beneficial in decreasing the occurrence of styes by liquefying the contents of the oil glands of the eyelid and thereby preventing blockage.[13]

To prevent developing styes, it is recommended to never share cosmetics or cosmetic eye tools with other people. People should also keep their eye tools clean and generally practice proper eye hygiene. It is also recommended to remove makeup every night before going to sleep and discard old or contaminated eye makeup.

The primary mode of treatment for a stye is application of warm compresses. Incision and drainage is performed if resolution does not begin in the next 48 hours after warm compresses are started.

As a part of self-care at home, patients may cleanse the affected eyelid with tap water or with a mild, nonirritating soap or shampoo (such as baby shampoo) to help clean crusted discharge. Cleansing must be done gently and while the eyes are closed to prevent eye injuries.[14]

Medical professionals will sometimes lance a particularly persistent or irritating stye with a needle to accelerate its draining.[15] A stye's expansion can also be fought with erythromycin ophthalmic ointment.[16] Medical professionals may also treat styes with other antibiotics, such as chloramphenicol or amoxicillin.[17] Chloramphenicol is used successfully in many parts of the world, but contains a black box warning in the United States due to concerns about aplastic anemia, which on rare occasions can be fatal. Erythromycin ointment enjoys widespread use, and may add to comfort and aid in preventing secondary infections. However, it is poorly absorbed when used topically, and usually requires oral dosing to reach the infection with therapeutic levels inside of a stye. AzaSite, a topical eye drop form of azithromycin, does appear to penetrate eyelid tissues fairly well, and in the future may be used as a topical treatment for styes.

If a stye bursts, care must be taken to cleanse the wound to prevent reinfection.

Patients are highly advised not to lance the stye, as serious infection can occur as a result. The infection could spread to the surrounding tissues and areas.

Eye stye sufferers should avoid eye makeup (e.g., eyeliner), lotions, and wearing contact lenses, since these can aggravate and spread the infection (sometimes to the cornea).

Medical treatment can also be provided by a doctor and it is aimed at relieving the symptoms. Pain relievers such as acetaminophen may be prescribed and in some cases, antibiotics may be needed. Antibiotics are normally given to patients with multiple styes or with styes that do not seem to heal, and to patients who also suffer from blepharitis or rosacea. Commonly, the ophthalmologist or optometrist prescribes oral or intravenous antibiotics, such as doxycycline, only when the infection has spread. Topical antibiotic ointments or antibiotic/steroid combination ointments can also be administered in stye treatment.

Surgery is the last resort in stye treatment. Styes that do not respond to any type of therapies are usually surgically removed. Stye surgery is performed by an ophthalmologist, and generally under local anesthesia. The procedure consists of making a small incision on the inner or outer surface of the eyelid, depending if the stye is pointing externally or not. After the incision is made, the pus is drained out of the gland, and very small and unnoticeable sutures are used to close the lesion. Sometimes the removed stye is sent for a histopathological examination to investigate possibility of skin cancer.

The word sty (first recorded in the 17th century) is probably a back-formation from styany (first recorded in the 15th century),[18] which in turn comes from styan plus eye,[19] the former of which in turn comes from the old English stígend, meaning riser, from the verb stígan, rise (in Old English G is often a Y sound). The homonym sty found in the combination pigsty has a slightly different origin, namely it comes from the Old English stí-fearh—fearh (farrow) is the Old English word for pig—where stig meant hall (cf. steward), possibly an early Old Norse loanword, which could be cognate with the word stigan above.[20]

The synonym late Latin expression is "Hordeolum" a modulation of the word "Hordeolus " simply related to "Horde" ( barley), in a resemblance of the growing plant from the seed, in ancient languages, for example Arabic it has the same meaning as a barley fascicle .