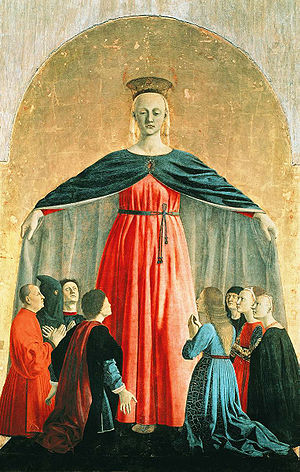 The Virgin of Mercy (Virgen de la Merced), depicting protection under the mantle of the Madonna. Oil on panel, 15th century.

The hymn is well-known in many Roman Catholic and Orthodox countries and is often a favourite song used along with Salve Regina.

The earliest text of this hymn was found in a Coptic Orthodox Christmas liturgy of the third century. It is written in Greek and dates to approximately 250.[1][2] It is used in the Coptic liturgy to this day, as well as in the Armenian, Byzantine, Ambrosian, and Roman Rite liturgies. It was part of Sulpician custom that all classes ended with a recitation of this prayer.[3]

Besides the Greek text, ancient versions can be found in Coptic, Syriac, Armenian and Latin.[4] "Praesidium" is translated as "an assistance given in time of war by fresh troops in a strong manner."[5]

The former medieval and post-medieval practice in several dioceses, especially in France, was to use the Sub tuum as the final antiphon at Compline instead of the Salve Regina[4] and in the Rite of Braga where it is sung at the end of Mass.

In the Byzantine Rite used by the Eastern Orthodox and Eastern Catholic Churches, the hymn occurs as the last dismissal hymn of daily Vespers in Great Lent. In Greek practice it is usually sung in Neo-Byzantine chant.

In the Armenian Rite, the hymn is sung on the Eve of Theophany and is also used as an acclamation (մաղթանք) in the daily compline service known as the Rest Hour (Հանգստեան Ժամ). A slightly different version of the hymn is appended to the Trisagion when the latter is chanted in the daily Morning (Առաւօտեան) and Evening (Երեկոյեան) Hours of the Daily Office.

The Slavonic version of the hymn is also often used outside of Great Lent, with the triple invocation «Пресвѧтаѧ Богородице спаси насъ» ("Most Holy Theotokos, save us") appended. Other than the traditional and modern chant settings, which are the most commonly used, the most well-known musical setting is perhaps that of Dmytro Bortniansky.

In the Roman Rite of the Catholic Church it is used as the antiphon for the Nunc Dimittis at Compline in the Little Office of the Blessed Virgin Mary, and in the Liturgy of the Hours may be used as the Marian antiphon after Compline outside of Eastertide.

The Latin version has also been set to music in the West many times, notably by Marc-Antoine Charpentier, Antonio Salieri and Wolfgang Amadeus Mozart.[3] In 2010 the text was set as a triple-choir motet in Latin, Slavonic and Greek by the English composer Ivan Moody.

The prayer has a special significance for Marists.[3] and it is often heard in Marist schools and groups around the world. It is also commonly used by the Salesians in honor of Mary Help of Christians.

The earliest Church Slavonic manuscripts have the prayer in the following form:

This version continues to be used by the Old Believers today. In the 17th century, under the liturgical reforms of Patriarch Nikon of Moscow, the Russian Orthodox Church adopted a new translation (but parishes continue to use the form given above):

This second version continues in use today.

The Latin translation, likely derived from the Greek, dates from the 11th century: