Mirza Yahya was born in 1831 to Kuchak Khanum-i-Karmanshahi (Ruhi, A Brief Biography) and Mírzá Buzurg-i-Núrí, in the province of Mazandaran, and a younger-half-brother of Mírzá Husayn `Ali, better known as Bahá'u'lláh. His mother died while giving birth to him, and his father died in 1834 when Mirza Yahya was three years old. His father is buried at Vadi-al-Islam in Najaf. Mirza Yahya was committed to the care of his stepmother Khadíjih Khánum, the mother of Bahá'u'lláh.[2] In 1844, at about the age of 14, he became a follower of the Báb.[3]

Appointment as the Báb's successor

Shortly before the Báb's execution, a follower of the Báb, Abd al-Karim, brought to the Báb's attention the necessity to appoint a successor; thus the Báb wrote a certain number of tablets which he gave to Abd al-Karim to deliver to Subh-i-Azal and Bahá'u'lláh.[4] These tablets were later interpreted by both Azalis and Bahá'ís as proof of the Báb's delegation of leadership.[4] Some sources state that the Báb did this at the suggestion of Bahá'u'lláh.[5][6]

In one of the tablets, which is commonly referred to as the Will and Testament of the Báb, Subh-i-Azal is viewed to have been appointed as leader of the Bábis after the death of the movement's founder; the tablet, in verse 27, also appears to order Subh-i-Azal "...to obey Him Whom God Shall Make Manifest."[7] Some state that Subh-i-Azal's claim to successorship is obvious;[8] others state that the Báb, for the purposes of secrecy, when corresponding with Bahá'u'lláh would address the letters to Subh-i-Azal.[9] After the Báb's death Subh-i-Azal came to be regarded as the central authority in the movement.[1]

Subh-i-Azal's leadership was controversial. He generally absented himself from the Bábí community spending his time in Baghdad in hiding and disguise; and even went so far as to publicly disavow allegiance to the Báb on several occasions.[1][9][10] Subh-i-Azal gradually alienated himself from a large proportion of the Bábís who started to give their alliance to other claimants.[1] Manuchehri states that Subh-i-Azal remained in hiding because he was primarily concerned with personal safety, due a statement from the Báb in his will and testament that Subh-i-Azal should protect himself.[7]

During the time that both Bahá'u'lláh and Subh-i-Azal were in Baghdad, Bahá'u'lláh publicly and in his letters pointed to Subh-i-Azal as the leader of the community.[9] However, since Subh-i-Azal remained in hiding, Bahá'u'lláh performed much of the daily administration of the Bábí affairs.[9] Then, in 1863 Bahá'u'lláh made a claim to be Him Whom God Shall Make Manifest, the messianic figure in the Báb's writings, to a small number of followers, and in 1866 he made the claim public.[1] Bahá'u'lláh's claims threatened Subh-i-Azal's position as leader of the religion since it would mean little to be leader of the Bábís if "Him Whom God Shall Make Manifest" were to appear and start a new religion.[9] Subhh-i-Azal responded by making his own claims, but his attempt to preserve the traditional Bábísm was largely unpopular, and his followers became the minority.[1]

In 1852, Subh-i-Azal was involved in an uprising in Takur, Iran, which was planned to coincide with the assassination attempt on the life of the Shah.[3] Following the attempt, he and other Babis chose to go into exile in Baghdad.[1] In Baghdad he lived as the generally acknowledged head of the community, but he kept his whereabouts secret from most of the community, instead keeping in contact with the Babis through intermediaries.[1][3] While he was in Baghdad, he also set up a network of agents, termed "witnesses", in Iran and Iraq to routinize the charismatic authority of the movement.[1] However, this attempt conflicted with the appeal of the original charisma of the religion, and his seclusion gradually alienated himself from many of the Babis,[1] leading to the appearance of other claimants for leadership of the Babi community.[3] 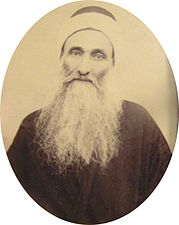 Ṣubḥ-i-Azal at the age of 80, unknown photographer, Famagusta, 1911 circa.

In 1863 most of the Babis were exiled by the Ottoman authorities to Adrianople.[3] In Adrianople, Bahá'u'lláh made his claim to be the messianic figure of the Bayan public, and created a permanent schism between the two brothers.[1][3] Subh-i-Azal responded to these claims by making his own claims and resisting the changes of doctrine which were introduced by Bahá'u'lláh.[1] His attempts to keep the traditional Babism were, however, mostly unpopular.[1] During this time there was feuding between the two groups. Subh-i-Azal was behind several murders and attempted murders of his enemies, including the poisoning of Bahá'u'lláh.[11][12][13] Some Azali sources take these allegations against him and re-apply them to Bahá'u'lláh, even claiming that he poisoned himself.[14] Finally the feuding between the two groups lead the Ottoman government to further exile the two groups in 1868; Bahá'u'lláh and the Baha'is were sent to Acre, Palestine and Subh-i Azal and his family, along with some followers were sent to Famagusta in Cyprus.[1] He died in Famagusta, Cyprus on April 29, 1912 and was buried with Muslim rites.[15]

According to Browne, Mirza Yahya had several wives, and at least nine sons and five daughters. His sons included: Nurullah, Hadi, Ahmad, Abdul Ali, Rizwan Ali, and four others. Rizvan Ali reports that he had eleven or twelve wives.[16] Later research reports that he had up to seventeen wives including four in Iran and at least five in Baghdad, although it is not clear how many, if any, were simultaneous.[17]

His most widely known title, "Subh-i-Azal" appears in an Islamic tradition called the Hadith-i-Kumayl (Kumayl was a student of the first Imam, Ali) which the Báb quotes in his book Dalá'il-i-Sab'ih.

It was common practice among the Bábís to receive titles. The Báb's Will and Testament addresses Mirza Yahya in the first verse:

"Name of Azal, testify that there is no God but I, the dearest beloved."[7]

Manuchehri (2004) notes that Mirza Yahya was the only Bábí with such a title as "Azal".[7]

However, the Báb appears to mention him only occasionally, if ever, specifically as "Subh-i-Azal", while attributing others with the title. He appeared to prefer calling him "Thamaratu'l-Azaliyya" and "'Ismu'l-Azal", while in early books he is called "Hadrat-i-Azal". This has led certain academics to doubt its origin, although they cite error, rather than deception as a motive.[18] There are also references to the titles al-Waḥīd, Ṭalʻat an-Nūr, and at-Tamara.[1]

There are conflicting reports as to whom Subh-i-Azal appointed as his successor. Browne reports that there was confusion over who was to be Subh-i-Azal's successor at his death. Subh-i-Azal's son, Rizwán `Ali, reported that he had appointed the son of Aqa Mirza Muhammad Hadi Daulatabadi as his successor; while another, H.C. Lukach's, states that Mirza Yahya had said that whichever of his sons "resembled him the most" would be the successor. None appear to have stepped forward.[19] MacEoin notes that Subh-i-Azal appointed his son, Yahya Dawlatabadi, as his successor, but notes that there is little evidence that Yahya Dawlatabadi was involved in the affairs of the religion,[1] and that instead he spent his time as that of secular reformer.[3] Shoghi Effendi reports that Mirza Yahya appointed a distinguished Bábí, Aqa Mirza Muhammad Hadi of Daulatabad (Mirza Hadiy-i-Dawlat-Abadi) successor, but he later publicly recanted his faith in the Báb and in Mirza Yahya. Mirza Yahya's eldest son apparently became a Bahá'í himself.[20][21] Miller quoting a later source states that Yahya did not name a successor.[22] Miller relied heavily on Jalal Azal who disputed the appointment of Muhammad Hadi Daulatabadi.[23]

MacEoin notes that after the deaths of those Azali Babis who were active in the Constitutional Revolution in Iran, the Azali form of Babism entered a stagnation which it has not recovered as there is no acknowledged leader or central organization.[1] Current estimates are that there are no more than a few thousand.[10][24]