The Sublime Porte, also known as the Ottoman Porte or High Porte (Ottoman Turkish: باب عالی‎ Bâb-ı Âli or Babıali, from Arabic: باب‎‎, bāb "gate" and Arabic: عالي‎‎, alī "high"), is a metonym for the central government of the Ottoman Empire, by reference to the gate giving access to the block of buildings that housed the principal state departments in Istanbul. Today, the buildings house the provincial Governor of Istanbul.

Porte is French for "gate". When Sultan Suleiman the Magnificent sealed an alliance with King Francis I of France in 1536, the French diplomats walked through the monumental gate or Bab-ı Ali in order to reach the Vizierate of Constantinople, seat of the Sultan's government. French being the language of diplomacy, the French translation Sublime Porte (the adjective being unusually placed ahead of the word to emphasise its importance) was soon adopted in most other European languages, including English, to refer not only to the actual gate but as a metaphor for the Ottoman Empire. 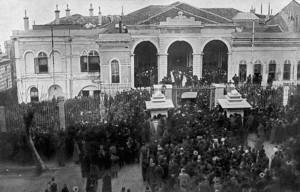 Crowd gathering in front of the Porte's buildings shortly after hearing about the Raid on the Sublime Porte (also known as the 1913 Ottoman coup d'état) inside.

"Sublime Porte" was used in the context of diplomacy by Western states, as their diplomats were received at the porte (meaning "gate"). During the second constitutional era of the Empire after 1908 (see Young Turk Revolution), the functions of the classical Divan-ı Hümayun were replaced by the reformed Imperial Government, and "porte" came to refer to the Foreign Ministry. During this period, the office of the Grand Vizier came to refer to the equivalent to that of a Prime Minister, and viziers became members of the Grand Vizier's cabinet as government ministers.