From Infogalactic: the planetary knowledge core
Jump to: navigation, search
This article is about the biological term. For the film series, see Subspecies (film series).

In biological classification, subspecies (abbreviated "subsp." or "ssp."; plural: "subspecies") is either a taxonomic rank subordinate to species, or a taxonomic unit in that rank. A subspecies cannot be recognized independently: a species will either be recognized as having no subspecies at all or at least two (including any that are extinct).

Under the International Code of Zoological Nomenclature, the subspecies is the only taxonomic rank below that of species that can receive a name. Under the International Code of Nomenclature for algae, fungi, and plants, other infraspecific ranks, such as variety may be named. In bacteriology, there are recommendations but not strict requirements for recognizing other important infraspecific ranks.

A taxonomist decides whether to recognize a subspecies or not. A common way to decide is that organisms belonging to different subspecies of the same species are capable of interbreeding and producing fertile offspring, but they do not usually interbreed in nature due to geographic isolation, sexual selection, or other factors. The differences between subspecies are usually less distinct than the differences between species. 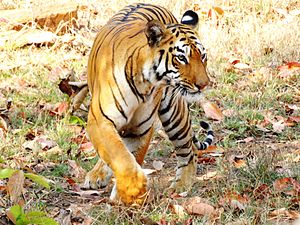 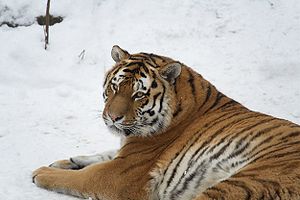 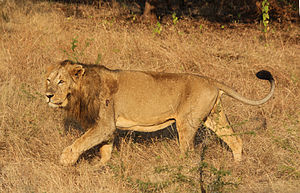 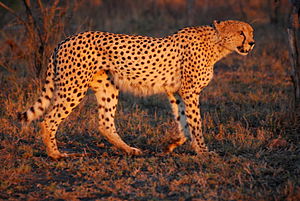 In zoology, the International Code of Zoological Nomenclature (4th edition, 1999) accepts only one rank below that of species, namely the rank of subspecies.[1] Other groupings, "infrasubspecific entities" do not have names regulated by the ICZN. Such forms have no official ICZN status, though they may be useful in describing altitudinal or geographical clines, pet breeds, transgenic animals, etc. While the scientific name of a species is a binomen, the scientific name of a subspecies is a trinomen - a binomen followed by a subspecific name. A tiger's binomen is Panthera tigris, so for a Sumatran tiger the trinomen is, for example, Panthera tigris sumatrae.

In bacteriology, the only rank below species that is regulated explicitly by the code of nomenclature is subspecies, but infrasubspecific taxa are extremely important in bacteriology; Appendix 10 of the code lays out some recommendations that are intended to encourage uniformity in describing such taxa. Names published before 1992 in the rank of variety are taken to be names of subspecies[2] (see International Code of Nomenclature of Bacteria).

In botany, subspecies is one of many ranks below that of species, such as variety, subvariety, form, and subform. The subspecific name is preceded by "subsp." or "ssp.", as Schoenoplectus californicus ssp. tatora (totora). A botanical name consists of at most three parts. An infraspecific name includes the species binomial, and one infraspecific epithet, such as subspecies or variety.

When zoologists disagree over whether a certain population is a subspecies or a full species, the species name may be written in parentheses. Thus Larus (argentatus) smithsonianus means the American herring gull; the notation within the parentheses means that some consider it a subspecies of a larger herring gull species and therefore call it Larus argentatus smithsonianus, while others consider it a full species and therefore call it Larus smithsonianus (and the user of the notation is not taking a position).[citation needed]

Members of one subspecies differ morphologically or by different coding sequences of DNA from members of other subspecies of the species. Subspecies are defined in relation to species.

As knowledge of a particular group increases, its categorisation may need to be re-assessed. The rock pipit was formerly classed as a subspecies of water pipit, but is now recognised to be a full species. For an example of a subspecies, see pied wagtail.

Cryptic species are morphologically similar, but have differences in DNA or other factors. 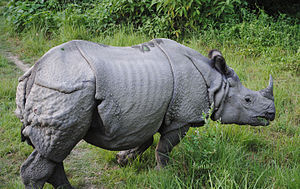 The Indian rhinoceros (Rhinoceros unicornis) is a monotypic species.

In biological terms, rather than in relation to nomenclature, a polytypic species has two or more subspecies, races, or more generally speaking, populations that need a separate description.[5] These are separate groups that are clearly distinct from one another and do not generally interbreed (although there may be a relatively narrow hybridization zone), but which may interbreed if given the chance to do so. These subspecies, races, or populations, can be named as subspecies by zoologists, or in more varied ways by botanists and microbiologists.

A monotypic species has no distinct population or races, or rather one race comprising the whole species. A taxonomist would not name a subspecies within such a species. Monotypic species can occur in several ways: