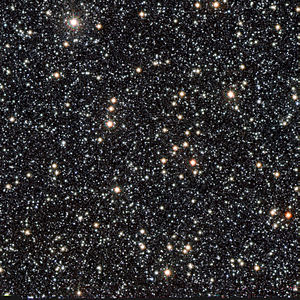 VVV BD001 is a brown dwarf located about 55 light-years away from Earth.[1]

A substellar object, sometimes called a substar, is an astronomical object whose mass is smaller than the smallest mass at which hydrogen fusion can be sustained (approximately 0.08 solar masses). This definition includes brown dwarfs and former stars similar to EF Eridani B, and can also include objects of planetary mass, regardless of their formation mechanism and whether or not they are associated with a primary star.[2][3][4][5]

Substellar objects like brown dwarfs can live forever even though they do not have enough mass to fuse hydrogen into helium.[citation needed]

A substellar object with a mass just below the hydrogen-fusing limit may ignite hydrogen fusion temporarily at its center. Although this will provide some energy, it will not be enough to overcome the object's ongoing gravitational contraction. Likewise, although an object with mass above approximately 0.013 solar masses will be able to fuse deuterium for a time, this source of energy will be exhausted in approximately 106 to 108 years. Apart from these sources, the radiation of an isolated substellar object comes only from the release of its gravitational potential energy, which causes it to gradually cool and shrink. A substellar object in orbit about a star will shrink more slowly as it is kept warm by the star, evolving towards an equilibrium state where it emits as much energy as it receives from the star.[7]

William Duncan MacMillan proposed in 1918 the classification of substellar objects into three categories based on their density and phase state: solid, transitional and dark (non-stellar) gaseous.[8] Solid objects include Earth, smaller terrestrial planets and moons; with Uranus and Neptune (as well as later mini-Neptune and Super Earth planets) as transitional objects between solid and gaseous. Saturn, Jupiter and large gas giant planets are in a fully "gaseous" state.