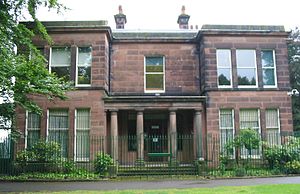 Built in the early 19th century for Liverpool Mayor Nicholas Robinson, Sudley became the house of Victorian ship owner and merchant George Holt in 1883. It was all bequeathed to the city in 1944 by Holt's daughter Emma Holt. It is run by National Museums Liverpool. After a period of two years of work, it was reopened on 26 May 2007 following a £1 million refurbishment including many new attractions.

The additions to Sudley House are: