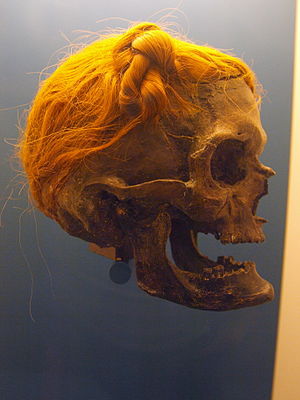 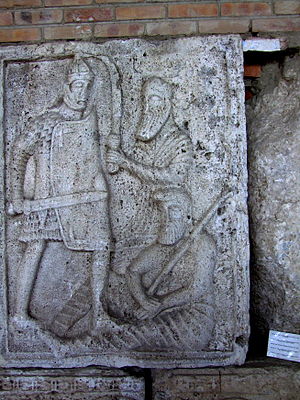 A battle scene from Tropaeum Traiani: a Roman legionnaire battles a Dacian warrior wielding a falx, while a Buri warrior sporting a Suebian knot lies injured on the ground.

The Suebian knot (German: Suebenknoten) is a historical male hairstyle ascribed to the tribe of the Germanic Suebi. The knot is attested by Tacitus in his 1st century AD work Germania, found on art by and depictions of the Germanic peoples, and worn by bog bodies.

According to Germania by Tacitus, the Suebian warriors combed their hair back or sideways and tied it into a knot, allegedly with the purpose of appearing taller and more awe-inspiring on the battlefield. Tacitus also reports that the fashion had spread to neighboring Germanic tribes among the younger warriors, while among the Suebians, the knot was sported even by old men as a status symbol, which "distinguishes the freeman from the slave", with the most artful knots worn by the most wealthy nobles.[1]

Suebian knots were found to be worn by a number of bog bodies:

In 2000 at the Baltic Sea coast at Czarnowko near Lębork, Poland, a bronze kettle was found depicting males wearing the Suebian knot hairstyle.[4]

Historical depictions are found on the Trajan column, the cauldron of Musov, the Tropaeum Traiani relief, and a bronze sculpture of a kneeling German in the Bibliothèque nationale de France.

The hairs are divided at the back in two uniform strands, slicked and laid in opposite directions around the head. On one side of the head, usually in the temporal region, the two strands are individually tightened in the same direction. The two strands are then twisted, whereby the rotation of the two individual strands loosens somewhat. A loop is formed from the resulting braid and the excess braid end is put in a loop through the loop. By natural untwisting the resulting knot tightens and stops without further aids. [5][6]