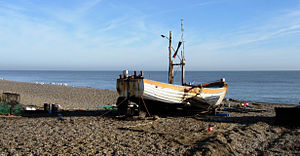 Suffolk Coastal is a local government district in Suffolk, England. Its council is based in Woodbridge. Other towns include Felixstowe, Framlingham, Leiston, Aldeburgh, and Saxmundham.

The district was formed on 1 April 1974, under the Local Government Act 1972, as a merger of the municipal borough of Aldeburgh, along with Felixstowe, Leiston-cum-Sizewell, Saxmundham and Woodbridge urban districts, and Blyth Rural District and Deben Rural District.

There are 117 civil parishes and towns in Suffolk Coastal.