Suffolk Constabulary is responsible for policing an area of 939,510 acres (3,802 km2), with a population of 678,074 and 288,473 households. The area covered is principally rural and coastal and the force has two territorial areas: Eastern and Western. The Eastern Area HQ is at Halesworth, the Western Area HQ at Bury St Edmunds. Each area is divided into sectors, with boundaries matching those of local district or borough councils. There are a total of 14 sectors across the county, each commanded by an inspector or chief inspector. As of 2 July 2005, Suffolk Constabulary had 1,305 police officers and 841 police staff, supplemented by 264 special constables, 15 traffic wardens and 34 police community support officers (PCSOs).

It was previously overseen by a Police Authority consisting of nine councillors, three justices of the peace and five independent members, but in common with other English and Welsh forces outside London is now responsible to a Police and Crime Commissioner. The current PCC is Tim Passmore of the Conservative Party.

The force is currently without a Chief Constable following the retirement of Douglas Paxton after a long period of ill health. T/CC Gareth Wilson is overseeing the force pending the appointment of a new Chief.

The National Police Air Service (NPAS) currently operates the helicopter from Wattisham Airfield serving Suffolk and East Anglia. However the NPAS announced in February 2015 that Suffolk’s police helicopter base is set to close with plans for 10 bases to be closed across the country to take effect in the 2016/2017 financial year. This will then leave Boreham near Chelmsford as the closest base to Suffolk.

As part of continued savings for Suffolk Constabulary, In 2011 the Suffolk and Norfolk Constabularies dogs sections collaborated. The new unit consists of 25 Police Constable dog handlers and overseen by two Police Sergeants and an Inspector.

The unit use Home Office licensed general purpose dogs that are either German Shepherds or Belgium Malinois. In addition a number of handlers operate specialist search dogs capable of detecting either cash, drugs, firearms or explosives. For this role the Constabulary uses a number of breeds including Spaniels and Labradors.

Officers part of the Traffic Police are responsible for the policing the two main road networks in Suffolk, the A14 and the A12, in addition to the counties highways. The department use Automatic Number Plate Recognition on many of the units vehicles to reduce vehicle crime including those without relevant documents or insurance. The unit also has targeted campaigns to increase public awareness of dangers on the road, these are divided into five main elements from the National Roads Policing Strategy: 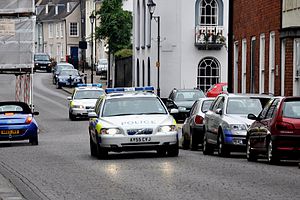 Two vehicles of Suffolk Constabulary responding to an emergency call

The firearms unit in Suffolk Police is known as the Tactical Firearms Unit (TFU) made up Authorised Firearms Officers (AFO) and also have a specialist rifle team. The TFU are trained in conflict management and method of entry, they are trained to use specialist equipment to gain quick entry into properties and regularly assist with search warrants.

A more recent addition is the Heckler and Koch baton gun. This fires a 'plastic baton round' and provides officers with a less lethal option.

TFU officers also have the X26 Taser available for deployment as another less lethal option. The Taser operates by discharging two barbs, which attach to the clothing, or penetrate the skin of the person. This creates a circuit through which 50000 volts of electricity is passed causing temporary incapacitation.

In 2006 Suffolk Constabulary merged the role of traffic warden with that of PCSO. Those traffic wardens that did not wish to pursue this role either retired or took employment elsewhere, or within the police service.[citation needed]

Proposals announced by the then Home Secretary Charles Clarke on 20 March 2006 would have seen the force merge with neighbouring forces Norfolk Constabulary and Cambridgeshire Constabulary to form a strategic police force for East Anglia.[2] However, the proposals were later abandoned.

Suffolk Constabulary gained widespread attention in December 2006, when it began to investigate the murder of five women working as prostitutes in the Ipswich area.[3] The murders generated media interest both nationally and internationally.[4][5][6]

The inquiry was the largest mounted by Suffolk Police in its history.[7]