Suffolk County /ˈsʌfək/ is a suburban county on Long Island and the easternmost county in the U.S. state of New York. At the 2010 census, the county's population was 1,493,350, estimated to have increased to 1,502,968 in 2014,[1] making it the fourth-most populous county in New York. Its county seat is Riverhead,[2] though some county offices are located in Hauppauge.[3] The county was named after the county of Suffolk in England, from where its earliest European settlers came.

Suffolk County incorporates the easternmost extreme of the New York City metropolitan area. The largest of Long Island's four counties and the second-largest of 62 counties in New York State, Suffolk measures 86 miles (138 km) in length and 26 miles (42 km) in width at its widest (including water).[4]

Suffolk County was an original county of the Province of New York, one of twelve created in 1683. From 1664 until 1683 it had been the East Riding of Yorkshire. Its boundaries were essentially the same as at present, with only minor changes in the boundary with its western neighbor, which was originally Queens County but has been Nassau County since the separation of Nassau from Queens in 1899.

According to the Suffolk County website, the county is the leading agricultural county in the state of New York, saying that: "The weather is temperate, clean water is abundant, and the soil is so good that Suffolk is the leading agricultural county in New York State. That Suffolk is still number one in farming, even with the development that has taken place, is a tribute to thoughtful planning, along with the excellent soil, favorable weather conditions, and the work of dedicated farmers in this region."[5] 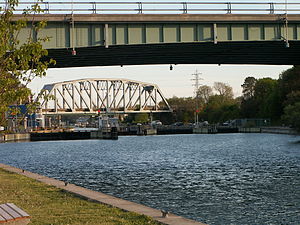 Suffolk County occupies the central and eastern part of Long Island, in the extreme southeast of New York State. The eastern end of the county splits into two peninsulas, known as the North Fork and the South Fork. The county is surrounded by water on three sides, including the Atlantic Ocean and Long Island Sound, with 980 miles (1,580 km) of coastline. The eastern end contains large bays.

The highest elevation in the county, and on Long Island as a whole, is Jayne's Hill in West Hills, at 401 feet (122 m) above sea level.

In 2002, the New York Times cited a study by the non-profit group ERASE Racism, which determined Suffolk and its neighboring county, Nassau, to be the most racially segregated suburbs in the United States.[21]

In 2008, Forbes magazine released its American Community Survey and named Suffolk County number 4 in its list of the top 25 richest counties in America. In 2015, according to Business Insider, the 11962 zip code encompassing Sagaponack, within Southampton, in The Hamptons at the East End of Long Island, was listed as the most expensive in the U.S., by real estate-listings site Property Shark, with a median home sale price of $5,125,000.[22]

As of 2006, Suffolk County ranked at number 21 on the list of the most populous counties in the United States.[25]

Suffolk County had long been a Republican bastion in New York. U.S. Congressman Rick Lazio, who opposed Hillary Clinton in the 2000 Senate race, was from Suffolk County. However, recent elections have turned the county more toward the Democrats. In 2003, Democrat Steve Levy was elected county executive, ending longtime Republican control. In 2001, Democrat Thomas Spota was elected District Attorney, and ran unopposed in 2005. Although Suffolk voters gave George H. W. Bush a victory here in 1992, the county voted for Bill Clinton in 1996 and continued the trend by giving Al Gore an 11-percent victory in the county in 2000. 2004 Democratic candidate John Kerry won by a much smaller margin of one percent, in 2008 Democratic candidate Barack Obama won by a slightly larger 4.4 percent margin, 52%-47%.

Suffolk County is represented by three congressional districts, the first, and parts of the second and third. The third is held by the Democratic Party, while the first and second are held by Republicans. Lee Zeldin, represents the first district, which includes almost half of the county, from Smithtown to Montauk, including The Hamptons and Riverhead.

The second district, is represented by Republican Peter King, and after redistricting includes parts of southern Suffolk and Nassau counties. The third district, is largely split between Nassau County and Suffolk County, is represented by Steve Israel. A Democrat, Israel won the seat vacated by Rick Lazio in 2000 when he made his unsuccessful bid for the U.S. Senate.

Map showing Long Island congressional districts 1, 2, and 3 after redistricting in 2012. Portions in red are within Suffolk County.

As a whole both Suffolk and Nassau counties are considered swing counties. However, they tend not to receive significant attention from presidential candidates, as the state of New York has turned reliably Democratic at the national level. Despite this, in 2008 and 2012, Hofstra University in Nassau County hosted a Presidential debate. 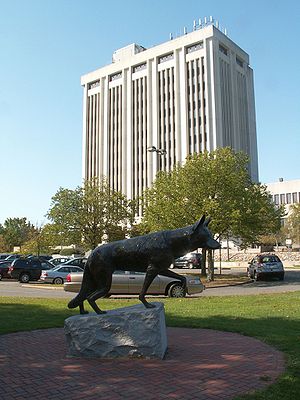 ** Levy was originally elected as a Democrat, but became a Republican in 2010.

The county is divided into 18 legislative districts, each represented by a legislator. As of 2015, there are 11 Democrats, 6 Republicans and 1 member of the Working Families Party: 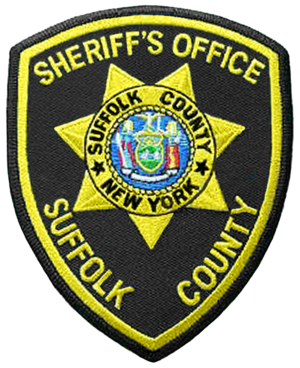 Police services in the five western towns (Babylon, Huntington, Islip, Smithtown and Brookhaven) are provided primarily by the Suffolk County Police Department. The five "East End" towns (Riverhead, Southold, Shelter Island, East Hampton, and Southampton), maintain their own police and other law enforcement agencies. Also, there are a number of villages, such as Amityville, Lloyd Harbor, Northport and Westhampton Beach, that maintain their own police forces. In an unusual move, the Village of Greenport in 1994 voted to abolish its police department and turn responsibility for law and order over to the Southold Town Police Department. After the Long Island State Parkway Police was disbanded in 1980, all state parkways in Suffolk County became the responsibility of Troop L of the New York State Police, headquartered at Republic Airport. State parks, such as Robert Moses State Park, are the responsibility of the New York State Park Police, based at Belmont Lake State Park. In 1996, the Long Island Rail Road Police Department was consolidated into the Metropolitan Transportation Authority Police, which has jurisdiction over all rail lines in the county. Since the New York state legislature created the New York State University Police in 1999, they are in charge of all law enforcement services for State University of New York property and campuses. The State University Police have jurisdiction in Suffolk County at Stony Brook University. 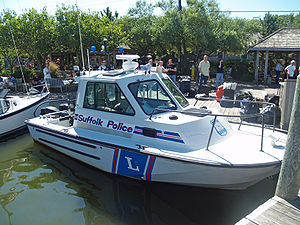 This includes Fire Island and even parts of Jones Island barrier beaches and the islands of the Great South Bay. Marine units also respond to water and ice rescues on the inland lakes, ponds and streams of the District.

Suffolk County is part of the 10th Judicial District of the New York State Unified Court System; is home to the Long Island Courthouse of the Federal U.S. District Court, Eastern District of New York;[29] and has various local municipal courts. The State Courts are divided into Supreme Court, which has general jurisdiction over all cases, and lower courts that either hear claims of a limited dollar amount, or of a specific nature.[30][31] Similarly, the local courts hear claims of a limited dollar amount, or hear specific types of cases. The Federal Court has jurisdiction over Federal Claims, State Law claims that are joined with Federal claims, and claims where there is a diversity of citizenship.[32]

The District Court and the Town and Village Courts are the local courts of Suffolk County. There are more than 30 local courts, each with limited criminal and civil subject matter and geographic jurisdictions. The local criminal courts have trial jurisdiction over misdemeanors, violations and infractions; preliminary jurisdiction over felonies; and traffic tickets charging a crime. The local civil courts calendar small claims, evictions, and civil actions.

Most non-criminal moving violation tickets issued in the 5 west towns are handled by the Traffic Violations Bureau, which is part of the New York State Department of Motor Vehicles, not the court system.

Suffolk County is home to numerous colleges and universities:

Fire Island Lighthouse was an important landmark for many trans-atlantic ships coming into New York Harbor in the early 20th century. For many European immigrants, the Fire Island Light was their first sight of land upon arrival in America. 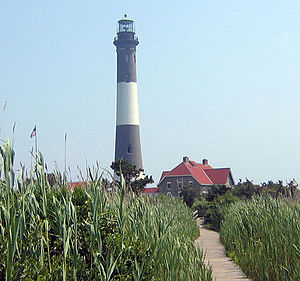 The Great South Bay Bridge, the first causeway bridge, had only one northbound and one southbound lane, was opened to traffic in April 1954. The span of 2 miles (3 km) across Great South Bay to Captree Island features a main span of 600 feet (200 m), with a clearance for boats of 60 feet (20 m). 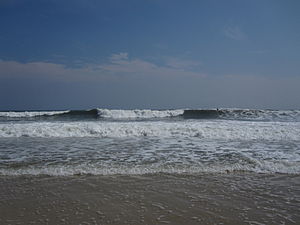 The proposed Peconic County flag showed the two forks at the east end of Long Island separated by Peconic Bay. The star on the north represents Southold. The stars on the South Fork represent Southampton and East Hampton. Riverhead is at the fork mouth and Shelter Island is between the forks.

The secessionist movement has not been active since 1998.

The End of the Hamptons: Scenes from the Class Struggle in America's Paradise, by Corey Dolgon (New York University Press, 2005[38]) examined the class roots of the secessionist movement in the Hamptons. In his review, Howard Zinn wrote that the book "[t]akes us beyond the much-romanticized beaches of Long Island to the rich entrepreneurs and their McMansions, the Latino workers, and the stubborn indigenous residents refusing to disappear. The book is important because it is in so many ways a microcosm of the nation."[39] The book won the Association for Humanist Sociology's 2005 Book Prize and the American Sociological Association's Marxist Section Book Award in 2007. 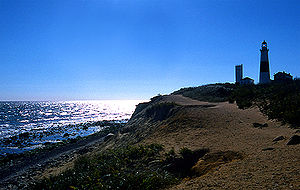 The Montauk Lighthouse is a landmark of Suffolk County, NY

In New York State, a town is the major subdivision of each county. Towns provide or arrange for most municipal services for residents of hamlets and selected services for residents of villages. All residents of New York who do not live in a city or on an Indian reservation live in a town. A village is an incorporated area which is usually, but not always, within a single town. A village is a clearly defined municipality that provides the services closest to the residents, such as garbage collection, street and highway maintenance, street lighting and building codes. Some villages provide their own police and other optional services. A hamlet is an informally-defined populated area within a town that is not part of a village. 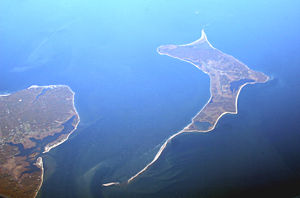 Gardiners Island is an island off eastern Suffolk County in the U.S. state of New York.

The same family has owned the Island for nearly 400 years, one of the largest privately owned islands in America or the world.

It is, however, the only American real estate still intact as part of an original royal grant from the English Crown.

Robins Island is an Island in the Peconic Bay between the North and South folks of eastern Suffolk County.

It is within the jurisdiction of Town of Southold in Suffolk County, New York.

The island is privately owned and not accessible to the public.

Two Indian reservations are located within the borders of Suffolk County: