The Sui language (simplified Chinese: 水语; traditional Chinese: 水語; pinyin: shuǐ yǔ) is a Tai–Kadai language spoken by the Sui people of Guizhou province in China. According to Ethnologue, it was spoken by around 200,000 people in 1999. Sui is also unique for its rich inventory of consonants, with the Sandong (三洞) dialect having as many as 70 consonants.[citation needed] The language also has its own script, known as "Shuishu" (水書) in Chinese, and is used for ritual purposes.

The Sui language is divided into three dialects with minor differences (Wei & Edmondson 2008).[3]

However, Castro (2011) proposes that the Sandong dialect is divided further into two more subdialects, Central (spoken in Sandu County) and Southern (spoken in Libo County). Southern Sui speakers are also culturally distinguished by their celebration of the Maox festival instead of the Dwac festival, which is celebrated by all other Sui groups. Below are some villages representative of Central and Southern Sui. Castro & Pan (2014) add two more dialects to the Sandong cluster, namely Eastern and Western.

Using computational phylogenetics, Castro & Pan (2014) classify the Sui dialects as follows. Pandong was the first branch to split off from Proto-Sui, followed by Yang'an and then Sandong. Within Sandong, the Southern dialect is the most divergent.

Sui is also spoken in Hồng Quang Village, Chiêm Hoá District, Tuyên Quang Province (62 km northwest of Chiêm Hoa City).[5] In Vietnam, the Sui are known as Thủy, but are officially classified with the Pà Thẻn people. The Sui numbered only 55 people as of the 1982 Vietnamese census, and numbered about 100 people as of 2001. Since Pa-Hng (Pà Thẻn) and Tày are also spoken in Hồng Quang Village, many Sui are also fluent in those two languages.

The elderly Sui people of Hồng Quang claim that 8 Sui families had migrated to Vietnam from China 100 to 200 years ago, 2 of which have now already assimilated into other ethnic groups. Edmondson & Gregerson (2001) have found that the Sui dialect of Hồng Quang is most similar to the Sandong 三洞 dialect of Sui as spoken in Shǔilóng 水龙, Sandu Shui Autonomous County, Guizhou, China.

Sui has seven vowels, /i e ə a aː o u/. Diphthongs are /ai̯ aːi̯ oi̯ ui̯ au̯ aːu̯ eu̯ iu̯/. There are six or seven tones, reduced to two in checked syllables. The tones of the Sandu Sui Autonomous County, Guizhou, listed by conventional tone numbers, are:

The alternate checked tone 7 is found on the long vowel /aːC/. Tone 8 is somewhat variable on a long vowel, appearing in different locations either higher or lower than the short allophone, but always falling, as in tones 2 and 4.

In some villages, tone 6 is two phonemes, /˨˦/ in native words and /˥/ in Chinese loanwords. In the village of Ngam, Libo county, tone 1 is low [˩], the others as above.

Consonants in parentheses were reported by the 1956 dialectology study Shuiyu diaocha baogao, but not in Li Fang Kuei's 1942 research in Libo County. (Labio-velars were not listed separately, so it's not clear if they also existed.)

The laminal postalveolar affricates are not palatalized like the Mandarin postalveolars /tɕ/, /tɕʰ/. /w/ is classed as a labial because it can be followed by a glide /j/. The prenasalized stops have very short nasalization. The voiceless nasals are actually voiced at the end, as most voiceless nasals are around the world. The preglottalized stops are truly preglottalized, not ejective or creaky voiced. The gammas have been described as fricatives, but here have been placed in the approximant row because of the preglottalized phone and the frequent ambiguity between dorsal fricatives and approximants.

In several locations in the Sandu Sui Autonomous County, the preglottalized consonants and the voiceless sonorants do not exist, having merged with the other consonants.

Syllable structure is CjVCT, where /j/ may follow one of the labial or coronal consonants, other than /m̥ ʔm/ (and /ʔw/) and the affricates. (/tsj, tsʰj, tsw, tsʰw/ occur in recent Chinese loans.) All syllables start with a consonant, unless initial [ʔ] is analyzed as phonetic detail of an initial vowel. The final C is one of /p t k m n ŋ/. Final plosives are both unphonated (have glottal closure) and are unreleased; the coronal is apical alveolar: [ʔ͡p̚, ʔ͡t̚, ʔ͡k̚]. They reduce the tonic possibilities to two, "tones" 7 or 8. 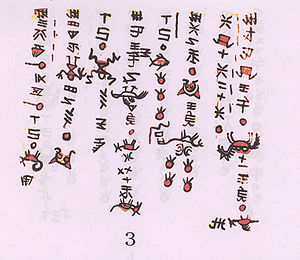 The Sui script (Sui: Lel Sai3,[6] Simplified Chinese: 水书, Traditional Chinese: 水書, Pinyin: Shuǐshū) is a pictographic writing system for the Sui language (Wei 2003:xxix).[7][dubious – discuss][Pictographic, or pictogram-based logographic?] However, only shamans are known to be familiar with it, and it is not utilized for everyday use by the Sui. This system is used for geomancy and divination purposes. There are at least 500 different Sui characters, known as le1 sui3 in the Sui language (Wei 2003:xxix). According to tradition, these characters were created by qong5 ljok8 to2 (陆译公). Some of these characters are pictoral representations, such as of a bird or a fish, and a few are schematic representations of a characteristic quality, such a snail represented by a drawing of an inward curving spiral. Many these characters appear to be borrowings from Chinese characters and are written backwards, apparently for increased supernatural power. Today, the Sui people use written Chinese for their daily activities.

The Sui script is in acute danger of extinction, although the Chinese government is currently attempting to preserve it.[8] In 2006, Shuishu was placed on the Chinese intangible cultural heritage list.[9]