Summer with Monika (Swedish: Sommaren med Monika) is a 1953 Swedish film directed by Ingmar Bergman. It sparked controversy abroad for its frank depiction of nudity and, along with the film One Summer of Happiness from the year before, directed by Arne Mattsson, it helped to create the reputation of Sweden as a sexually liberated place.

The film made a star of its lead actress, Harriet Andersson. Bergman had been intimately involved with Andersson at the time and conceived the film as a vehicle for her. The two of them would continue to work together, even after their romantic relationship had ended, in films like Sawdust and Tinsel, Smiles of a Summer Night, Through a Glass Darkly, and Cries and Whispers.

The film's story begins in the bleak working-class milieu of Stockholm. Harry (Lars Ekborg) and Monika (Harriet Andersson) are both in dead end jobs when they meet. Harry is easygoing, while Monika is adventurous, but they fall in love. When Monika gets in trouble at home, Harry steals his father's boat, and he and Monika spend an idyllic summer in the Stockholm archipelago. When the end of the summer forces them to return home, it is clear that Monika is pregnant. Harry happily accepts responsibility and settles down with Monika and their child; he gets a real job and studies to provide for his family. Monika, however, is unsatisfied with her role as homemaker. She yearns for excitement and adventure, a desire which finally leads her astray. Harry is left behind with the child. 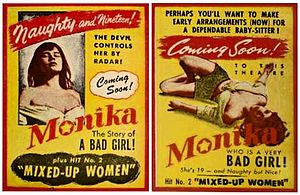 Two small promotional flyers for the American presentation of the film.

Exploitation film presenter Kroger Babb purchased the US rights to the film in 1955. To increase excitement for the film, he edited it down to 62 minutes and emphasized the film's nudity. Renaming the film Monika, the Story of a Bad Girl, he provided a good deal of suggestive promotional material, including postcards featuring the nude Andersson.[1]

Summer with Monika was the first Bergman film seen by Woody Allen:[2]

"The first Bergman I ever saw was that one because there was talk in the neighborhood that there was a nude scene. This was unheard of in any American film, that level of advancement. It’s so funny to think of it that way. I saw it, and it was a very, very interesting film apart from the utterly benign nude moment. A short time after that, I just happened to see Sawdust and Tinsel. I had no idea it was done by Bergman — that is, the person who’d done Summer with Monika — and it was just a fabulous movie. I was riveted in my seat by it all. I thought to myself, 'Who is this guy?'”