From Infogalactic: the planetary knowledge core
(Redirected from Summit (topography))
Jump to: navigation, search
This article is about a topographic term. For other uses, see Summit (disambiguation). 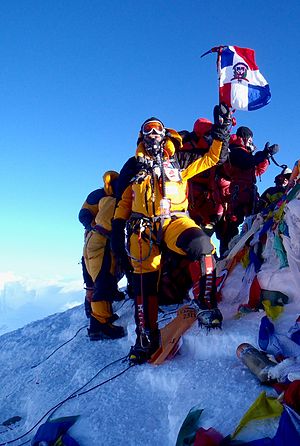 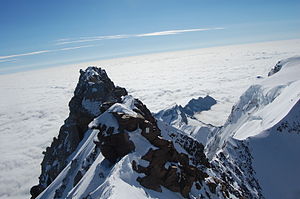 View from the summit of Switzerland's highest, Monte Rosa

A summit is a point on a surface that is higher in elevation than all points immediately adjacent to it. Mathematically, a summit is a local maximum in elevation. The topographic terms "acme", "apex", "peak", and "zenith" are synonyms.

The term "summit" is generally only used for a mountain peak with some significant amount of topographic prominence (height above the lowest point en route to the nearest higher peak) or topographic isolation (distance from the nearest point of higher elevation); for example, a boulder next to the main summit of a mountain is not considered a summit. Summits near a higher peak, with some prominence or isolation, but not reaching a certain cutoff value for these quantities, are often considered subsummits (or subpeaks) of the higher peak, and are considered as part of the same mountain. The UIAA definition is that a summit is independent if it has a prominence of 30 metres (98 ft) or more; it is a mountain if it has a prominence of at least 300 metres (980 ft). This can be summarised as follows:

A pyramidal peak is an exaggerated form produced by ice erosion of a mountain top. Summit may also refer to the highest point along a line, trail, or route. 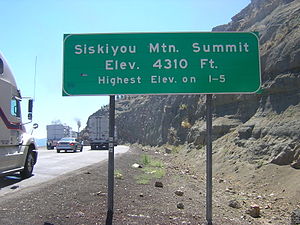 Siskiyou Mountain Summit sign along Interstate 5, marking the highest point along the highway