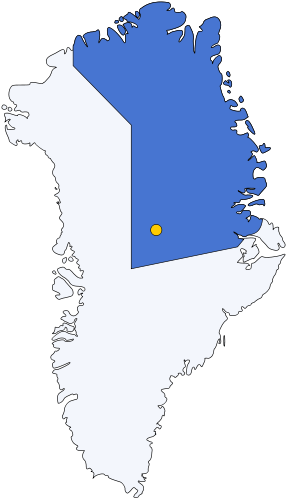 Summit Camp, also Summit Station, is a year-round research station on the apex of the Greenland Ice Sheet. Its coordinates are variable, since the ice is moving. The coordinates provided here are as of July 2009. The station is located 3,216 metres (10,551 ft) above sea level.[1] The population of the station is typically five in wintertime, and has peaked at 55 in the summer.[citation needed] The station is operated by the American-based CH2M HILL Polar Services[2] (formerly known as Veco Polar Resources), with support from the United States' National Science Foundation.[3][4] A permit from the Danish Polar Center (Danish: Dansk Polarcenter) under the auspices of the Home Rule Government of Greenland (Greenlandic: Kalaallit Nunaanni Inatsisartut) is required to visit the station.

The camp is located approximately 360 km from the east coast and 500 km from the west coast of Greenland at (Saattut, Uummannaq), and 200 km north-northeast of the historical ice sheet camp Eismitte. The closest town is Ittoqqortoormiit, 460 km east-southeast of the station. The station however is not part of Sermersooq municipality, but falls within the bounds of the Northeast Greenland National Park.

Summit Camp was originally established in April 1989 in support of the Greenland Ice Sheet Project Two (GISP2) deep ice coring effort. A ski-equipped C-130 from the New York Air National Guard performed an open snow landing near the site, bringing the put-in team consisting of Mark Twickler, Jay Klink, Michael Morrison, and two navigation specialists. They located the exact location chosen for the GISP2 drilling site, established a camp, and laid out the runway. Subsequent flights brought in additional materials and personnel needed to build the station. Two major structures were planned and built: The Big House, an insulated panel building (housing a galley, common space, and office), elevated to minimize snow drifts; and a geodesic drill dome to house the deep drill. Extensive under-snow trenches were also constructed to house the core handling, processing, and storage facilities. Many smaller WeatherPorts and tents were also erected as storage and shop areas, as well as sleeping quarters. These were erected and taken down each season. On July 1, 1993, the bedrock was reached. Originally a summer station only, the station had been manned year round since the early 2000s, with a winter population of 4 to 5.

In July 2012, satellite imagery showed there was an "unprecedented" melt of the Greenland ice sheet. In just four days from 8 July, the area of thawed surface ice grew from 40% to almost 97% of the entire ice sheet surface.[9]

During the summer months the camp is accessed via Kangerlussuaq Airport with LC-130 Hercules aircraft which land on a 4,572 by 60 m (15,000 by 197 ft) snow runway, which is prepared and regularly groomed for ski-equipped aircraft.[4] Winter access is infrequent, using smaller, ski-equipped aircraft such as a Twin Otter flown by Air Greenland.