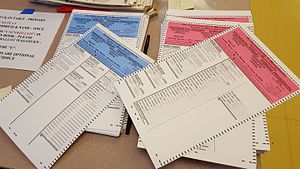 Republican and Democratic party ballots in a Massachusetts polling location, 2016

In the United States, Super Tuesday, in general, refers informally to one or more Tuesdays early in a United States presidential primary season when the greatest number of U.S. states hold primary elections and caucuses. More delegates to the presidential nominating conventions can be won on Super Tuesday than on any other single day of the primary calendar. Since Super Tuesday primaries and caucuses are typically held in a large number of states from geographically and socially diverse regions of the country, it typically represents a presidential candidate's first test of national electability. Thus, candidates seeking the presidency traditionally must do well on this day to help secure their party's nomination. In fact, convincing wins in Super Tuesday primaries have usually propelled candidates to their party's nomination. Super Tuesday is in either February or March of the presidential election year. During the 2016 election year, Super Tuesday was held on March 1.

The phrase "Super Tuesday"[2] has been used to refer to presidential primary elections since at least 1976.[3] It is an unofficial term used by journalists and political pundits. In 2016, this date was also dubbed the "SEC Primary" since many of the participating states are represented in the Southeastern Conference (SEC), one of country's major collegiate athletic conferences.

United States politics are dominated by two major political parties, the Democratic and Republican parties, who choose their presidential candidates in nominating conventions attended by delegates from states. State law determines how each parties' delegates are chosen in that state including by either a primary election or a caucus and on what date those contests are held. State governments are free to choose whichever date they want for their states' primary or caucus. With the broadened use of the modern presidential primary system (following the chaotic 1968 Democratic National Convention in Chicago), states have tried to increase their influence in the nomination process. One tactic has been to create geographic blocs to encourage candidates to spend time in a region.

One motivation for the creation of Super Tuesday has been criticism and reform proposals of the current primary system many of which argue for creating a National Primary or a regional primary, such as the Rotating Regional Primary System adopted by the National Association of Secretaries of State in 1999, among other proposals.

The 1984 primary season had three "Super Tuesdays".[4] Decided on "Super Tuesday III" were delegates from five states: South Dakota, New Mexico, West Virginia, California and New Jersey.[5] The proportional nature of delegate selection meant that Walter Mondale was likely to obtain enough delegates on that day to win the nomination at the 1984 Democratic National Convention, no matter who actually won the states contested. However, Gary Hart maintained that unpledged superdelegates that had previously announced support for Mondale would shift to his side if he swept the Super Tuesday III primary.[6] Once again, Hart committed a faux pas, insulting New Jersey shortly before the primary day. Campaigning in California, he remarked that while the "bad news" was that he and his wife Lee had to campaign separately, "[t]he good news for her is that she campaigns in California while I campaign in New Jersey." Compounding the problem, when his wife interjected that she "got to hold a koala bear", Hart replied that "I won't tell you what I got to hold: samples from a toxic waste dump."[6] While Hart won California, he lost New Jersey after leading in polls by as much as 15 points. Mondale secured the majority of delegates from the primaries, leading the way for him to take the Democratic nomination.[4] In the 1984 Republican Party primaries, incumbent President Ronald Reagan was the only candidate to secure delegates.[7]

The phrase "Super Tuesday" was next used to describe the primary elections that took place on March 9, 1988, in the Southern states of Texas, Florida, Tennessee, Louisiana, Oklahoma, Mississippi, Kentucky, Alabama, and Georgia leading up to the 1988 November election. In the 1988 Democratic Party primaries, Southern Democrats came up with the idea of a regional primary in an effort to nominate a moderate candidate who would more closely represent their interests. However, Dick Gephardt, Jesse Jackson, Al Gore, and Michael Dukakis split the Super Tuesday primaries, and Dukakis was subsequently nominated. Meanwhile, George H.W. Bush secured most of the delegates in the 1988 Republican Party primaries. From 1996 to 2004, most of these Southern primaries were held the week after Super Tuesday, dubbed "Southern Tuesday" by news commentators.[citation needed]

In 1992, Super Tuesday was on March 10. After losing earlier primaries, Democrat Bill Clinton won a number of Southern primaries on Super Tuesday en route to winning the 1992 Democratic nomination and later the presidency. On the other hand, incumbent George H. W. Bush, faced opposition from Pat Buchanan in the Republican primaries that year.[8]

In 1996, Super Tuesday was on March 12. Bob Dole's swept Super Tuesday en route to his bid for the 1996 Republican nomination.[9] Clinton, the incumbent president, secured all the delegates in the 1996 Democratic primaries.[10]

In 2000, Super Tuesday was on March 7. Sixteen states held primaries on Super Tuesday, the largest presidential primary election day in U.S. history up to that point.[citation needed] In 2000, approximately 81% of Democratic delegates and 18% of Republican delegates needed to secure nomination were up for grabs on Super Tuesday. That year, Democrat Al Gore and Republican George W. Bush cemented their nomination bids with Super Tuesday victories, and both went on to win their parties' nominations.[11][12] 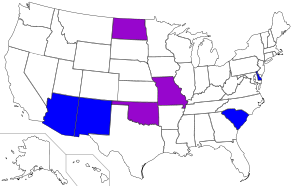 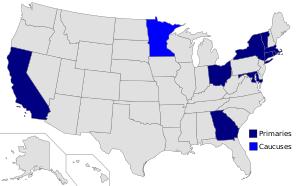 The states participating in primaries or caucuses on March 2, 2004.

In 2004, several states moved their presidential contests up to February 3, 2004 in order to increase the relative importance of their election results. Ultimately, five states held primaries and two held caucuses on this date, a date eventually christened Mini-Tuesday or, alternatively, Super Tuesday I by pundits, with the traditional March Super Tuesday date, March 2, christened Super Tuesday II, or just simply "Super Tuesday." While the results of Mini-Tuesday had far-reaching implications for the Democratic primaries, the Republican primaries were uncontested as incumbent President George W. Bush was the assured nominee. 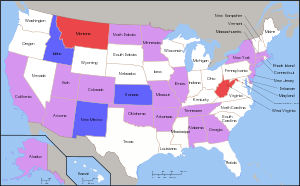 To increase importance of their votes, 24 states with over half the delegates to the national conventions moved to change their primary dates to February 5, 2008, creating the largest "Super Tuesday" to date. Newswriters and political pundits noted that it would dwarf the Super Tuesday primaries in previous cycles.[13] Because of its political magnitude, some pundits have variously dubbed it "Giga Tuesday," "Mega Giga Tuesday," "Tsunami Tuesday" or even "Super Duper Tuesday."[13]

With only four states holding elections on the year's other Super Tuesday of March 5, 2008, one pundit said "this year, however, Super Tuesday isn't so super."[14] 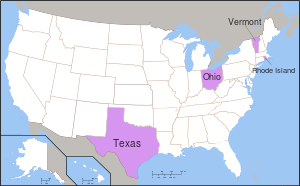 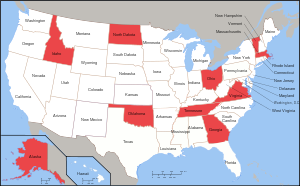 Super Tuesday in 2012 took place on March 6, 2012, totaling 419 delegates (18.3% of the total) in 10 states in the Republican primaries.[15] The Democratic primaries were uncontested as incumbent President Barack Obama was the assured nominee.

The impact of Super Tuesday was lessened by Mitt Romney's convincing victories preceding Super Tuesday. Frontrunner Romney was able to increase his lead significantly, with wins in six states and winning over half the delegates at stake. However, Santorum's three wins, and a near-win in Ohio, allowed him to carry on as a candidate for another month. 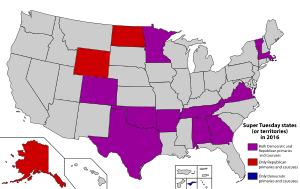 Super Tuesday by states and territories, 2016 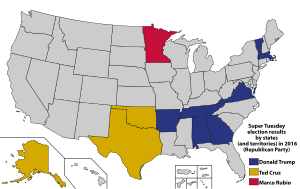 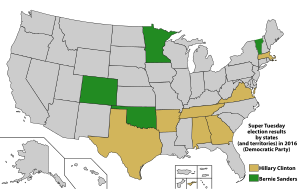 Super Tuesday in the 2016 presidential election was held on March 1, 2016. This date was dubbed the SEC Primary, since many of the participating states were represented in the U.S. Southeastern Conference for college athletics (five southern states).[16][17]

The Republican candidates could win about half of the 1,237 delegates needed. The two remaining Democrats were after 880 delegates, roughly one-third of those needed to win. The number of delegates from Texas is much greater than the other states: 155 for Republicans and 252 for Democrats.

The Republican primaries and caucuses concluded with Donald Trump winning Alabama, Arkansas, Georgia, Massachusetts, Tennessee, Vermont, and Virginia; Ted Cruz winning Alaska, Oklahoma, and Texas; and Marco Rubio winning Minnesota. John Kasich and Ben Carson were also in the election, but neither won any states. Results from the North Dakota and Wyoming caucuses are yet to be determined, though their delegates are not required to support the winners of those contests and can freely pledge to their preferred candidate during their respective state party conventions.

Additionally, several third-party primaries were held on March 1. The Libertarian Party hosted its caucus in Minnesota, which was won by Gary Johnson. The Green Party of the United States hosted two contests, a primary in Massachusetts and a caucus in Minnesota, both of which were won by Jill Stein. 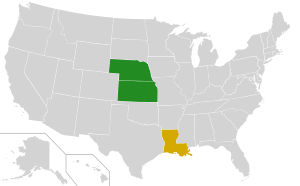 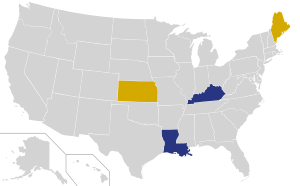 Owing to a number of states holding their primaries or caucuses on Saturday, March 5, 2016, the date was referred to in the media as "Super Saturday" in reference to Super Tuesday. Kansas had caucuses for both parties. Louisiana had a primary for both parties. Maine and Kentucky held caucuses for Republicans. Nebraska Democrats caucused on Super Saturday.[22][23][24] There were 155 delegates at stake for Republicans and 109 delegates available for Democrats.

Ted Cruz was first to be declared a winner of a state, with a firm lead in Kansas and just over half of the votes in, as well as winning in Maine. Donald Trump meanwhile, won the states of Kentucky and Louisiana.[23] 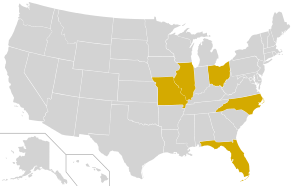 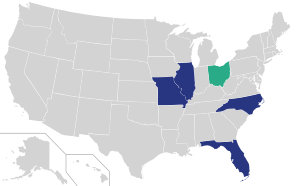 On this day, 5 states held both Democratic and Republican primaries: Florida, Illinois, Missouri, North Carolina and Ohio. Republican caucuses were also held in the Northern Marianas Islands. The Republican races were particularly significant as four of these (excepting the North Carolina primary) were the first in the cycle to use winner-takes-all voting systems. Republican contests held prior to March 14 were only permitted to use proportional systems. There were 697 delegates at stake for Democrats and 358 delegates for Republicans.

On April 26, 2016, five Northeastern primaries were contested by both parties (Connecticut, Delaware, Maryland, Pennsylvania and Rhode Island) and were collectively termed the Acela primaries or the Amtrak primaries in reference to the Acela Express, which runs through the area. It was alternately referred to as Super Tuesday III.[33][34]

Jun 7, 2016 both the Democrats and the Republicans will hold primaries and caucuses in California, Montana, New Jersey, New Mexico, South Dakota. With the exception of the North Dakota Democratic caucus, all of the aforementioned contests on Jun 7th will be primaries.

The Republican primaries will be the last contests of the entire Republican Party party primary process. The Democratic contests will be succeeded by only the District of Columbia Democratic primary, which will be held a week later.