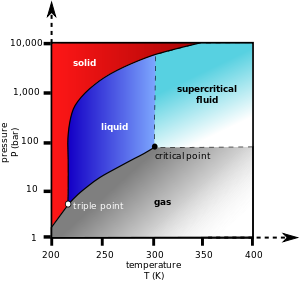 Carbon dioxide usually behaves as a gas in air at standard temperature and pressure (STP), or as a solid called dry ice when frozen. If the temperature and pressure are both increased from STP to be at or above the critical point for carbon dioxide, it can adopt properties midway between a gas and a liquid. More specifically, it behaves as a supercritical fluid above its critical temperature (304.25 K, 31.10 °C, 87.98 °F) and critical pressure (72.9 atm, 7.39 MPa, 1,071 psi), expanding to fill its container like a gas but with a density like that of a liquid.

Supercritical CO2 is becoming an important commercial and industrial solvent due to its role in chemical extraction in addition to its low toxicity and environmental impact. The relatively low temperature of the process and the stability of CO2 also allows most compounds to be extracted with little damage or denaturing. In addition, the solubility of many extracted compounds in CO2 varies with pressure,[1] permitting selective extractions.

Carbon dioxide is gaining popularity among coffee manufacturers looking to move away from some of the classic decaffeinating solvents of the past, many of which have led to public outcry because of real or perceived dangers related to their use in food preparation. Supercritical CO2 is forced through the green coffee beans which are then sprayed with water at high pressure to remove the caffeine. The caffeine can then be isolated for resale (e.g. to the pharmaceutical industry or to beverage manufacturers) by passing the water through activated charcoal filters or by distillation, crystallization or reverse osmosis. Supercritical carbon dioxide is used to remove organichloride pesticides and metals from agricultural crops without adulterating the desired constituents from the plant matter in the herbal supplement industry (Department of Pharmaceutical Analysis, Shenyang Pharmaceutical University, Shenyang 110016, China).

Supercritical carbon dioxide can also be used as a more environmentally friendly solvent for dry cleaning as compared to more traditional solvents such as hydrocarbons and perchloroethylene.[2]

Supercritical carbon dioxide is used as the extraction solvent for creation of essential oils and other herbal distillates. Its main advantages over solvents such as hexane and acetone in this process are that it is non-toxic and non-flammable. Furthermore, separation of the reaction components from the starting material is much simpler than with traditional organic solvents, merely by allowing it to evaporate into the air or recycling it by condensation into a cold recovery vessel. Its advantage over steam distillation is that it is used at a lower temperature, which can separate the plant waxes from the oils.[3]

Processes which use supercritical carbon dioxide to produce micro and nano scale particles, often for pharmaceutical uses, are currently being developed. The gas antisolvent process, rapid expansion of supercritical solutions, and supercritical antisolvent precipitation (as well as several related methods) have been shown to process a variety of substances into particles.[7]

An electrochemical carboxylation of a para-isobutylbenzyl chloride to Ibuprofen is promoted under supercritical carbon dioxide.[9]

Supercritical CO2 is chemically stable and reliable, in the sense that it is a low-cost fluid that is non-toxic, non-flammable and readily available, making it a desirable candidate working fluid for these applications. However, this fluid also presents more interesting properties that promise drastic improvements in system efficiency. Due to its high fluid density, supercritical CO2 enables extremely compact and highly efficient turbomachinery, with simpler single casing body designs in comparison to steam turbines that require multiple turbine stages and associated casings, as well as additional inlet and outlet piping. The high density further allows for highly compact, microchannel-based heat exchanger technology.[10]

Further, due to the superior thermal stability and non-flammability of supercritical CO2, direct heat exchange from high temperature sources is possible, permitting higher working fluid temperatures, and therefore higher cycle efficiency. And unlike two-phase flow, supercritical CO2’s single-phase nature eliminates the necessity of a heat input for phase change that is required for the water to steam conversion, thereby also eliminating the associated thermal fatigue and corrosion.[11]

However, despite the promise of substantially higher efficiency and lower capital costs, the use of supercritical CO2 raises materials selection and design issues for system components that must be addressed to make sCO2 a feasible alternative to incumbent technology. Materials in power generation components must display a unique combination of properties, including high-temperature resistance, oxidation resistance and creep resistance, to meet the demanding performance requirements of the extreme environments and conditions in which they operate. Candidate materials that meet these property and performance goals include incumbent alloys in power generation, such as nickel-based superalloys for turbomachinery components and austenitic stainless steels for piping. However, supercritical CO2 raises additional materials concerns. Components within current sCO2 Braytoon loops suffer from corrosion and erosion, specifically erosion in turbomachinery and recuperative heat exchanger components, and intergranular corrosion and pitting in the piping.[12]

Although limited research has been conducted to address this issue, testing has been conducted on candidate Ni-based alloys, austenitic steels, ferritic steels and ceramics for corrosion resistance in sCO2 cycles. The interest in these materials derive from their formation of protective surface oxide layers in the presence of carbon dioxide, however in most cases further evaluation of the reaction mechanics and corrosion/erosion kinetics and mechanisms is required, as none of the materials meet the property goals.[13][14]

There is considerable work being done to develop a supercritical carbon dioxide closed-cycle gas turbine to operate at temperatures near 550 °C. This is a significant usage, which could have large implications for bulk thermal and nuclear generation of electricity, because the supercritical properties of carbon dioxide at above 500 °C and 20 MPa enable very high thermal efficiencies, approaching 45 percent. This could increase the electrical power produced per unit of fuel required by 40 percent or more. Given the volume of polluting fuels used in producing electricity, the environmental impact of cycle efficiency increases would be significant.[15]

Supercritical carbon dioxide is also an important emerging natural refrigerant, being used in new, low carbon solutions for domestic heat pumps. These systems are undergoing continuous development with supercritical carbon dioxide heat pumps already being successfully marketed in Asia. The EcoCute systems from Japan, developed by Mayekawa, develop high temperature domestic water with small inputs of electric power by moving heat into the system from their surroundings. Their success makes a future use in other world regions possible.[16]

Supercritical carbon dioxide has been used for more than thirty years to enhance oil recovery in mature oil fields. At the same time, there is the possibility of using the various "clean coal" technologies which are emerging to combine such enhanced recovery methods with carbon sequestration efforts. Using gasifiers instead of conventional furnaces, coal and water is reduced to hydrogen gas, carbon dioxide, and ash. This hydrogen gas can be used to produce electrical power in combined cycle gas turbines, while the CO2 is captured, compressed to the supercritical state, and injected into geological storage, possibly into existing oil fields to improve yields. The unique properties of supercritical CO2 ensure that it will remain out of the atmosphere.[17][18][19]

It has been suggested that supercritical carbon dioxide could be used as a working fluid in enhanced geothermal systems. Possible advantages compared to water include higher energy yield resulting from its lower viscosity, better chemical interaction, CO2 storage through fluid loss and higher temperature limit. As of 2011, the concept has never been tested in the field.[20][21][22][23][24]

Recent studies have proved SC-CO2 is an effective alternative for terminal sterilization of biological materials and medical devices with combination of the additive PAA (peracetic acid). The SC-CO2 only does not sterilize the media, because it does not kill the spores of microorganisms. Moreover, this process is gentle, as the morphology, ultrastructure, and protein profiles of inactivated microbes are maintained.[26]

Due to its ability to selectively dissolve organic compounds and assist the functioning of enzymes, supercritical carbon dioxide has been suggested as a potential solvent to support biological activity on Venus- or super-Earth-type planets.[27]

Early Venus, with a boiling atmospheric pressure 100 times Earth's may have had a carbon dioxide ocean, in supercritical liquid state, according to studies at Cornell University.[28] The current atmosphere, which has an average temperature of 740 K and average pressure of 92 atm (varying by elevation), is in fact in the supercritical range, as the critical temperature of CO2 is 304 K and the critical pressure is 72.9 atm.