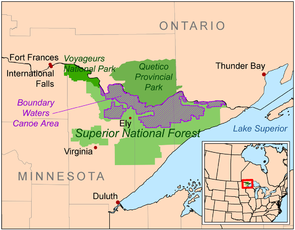 Location of the forest

Superior National Forest, part of the United States National Forest system, is located in the Arrowhead Region of the state of Minnesota between the Canada – United States border and the north shore of Lake Superior. The area is part of the greater Boundary Waters region along the border of Minnesota and the Canadian province of Ontario, a historic and important thoroughfare in the fur trading and exploring days of British North America.

Under the administration of the United States Forest Service, the Superior National Forest comprises over 3,900,000 acres (6,100 mi2 or 16,000 km2) of woods and waters. The majority of the forest is multiple-use, including both logging and recreational activities such as camping, boating, and fishing. Slightly over a quarter of the forest however is set aside as a wilderness reserve known as the Boundary Waters Canoe Area (BWCA), where canoers can travel along interconnected lakes and rivers and over historic portages once used by the Native Americans and later by European explorers and traders.

The forest is located in Cook, Lake, and Saint Louis Counties in northeastern Minnesota. Forest headquarters are located in Duluth, Minnesota, outside the boundaries of the forest. There are local ranger district offices in Aurora, Cook, Ely, Grand Marais, and Tofte.[3]

The forest is located on part of the Canadian Shield. The area is on a low plateau which is part of the Superior Upland. High points include the Sawtooth Mountains, a range of hills along the shore of Lake Superior, the Misquah Hills including Eagle Mountain, the state's highest point, and other uplands along the Laurentian Divide separating the watershed of the Great Lakes and Atlantic Ocean from that of Hudson Bay and the Arctic Ocean. Despite the presence of dramatic cliffs and other local differences in elevation, the area is essentially flat, as it is part of an old peneplain eroded by weathering, water, and especially glaciers.

The principal surficial result of recent glaciation is not the deposition of glacial drift (unlike most of the rest of the state), but the remodeling of the landscape by the scraping away of softer surfaces down to bare hard rock. The land therefore is raw, with many outcroppings of ancient bedrock, overlain in places by thin layers of gravelly soil and, in the west, silts deposited by Glacial Lake Agassiz.[1]

Eagle Mountain, the highest natural point in Minnesota at 2,301 feet (701 m) is located in the Superior National Forest.

The forest contains a small slice of true boreal forest (taiga), and a mixed conifer-hardwood forest known as the North Woods, a transition province between the northern boreal forest and deciduous forests to the south.[7] Conifers include several varieties of pine, fir, and spruce trees, principal deciduous species are mountain ash, maple, aspen, oak, and paper birch are also common.[8] Characteristic aquatic plants include water lilies and wild rice.

Fish species such as walleye, northern pike, smallmouth bass, lake trout, brook trout, rainbow trout, and brown trout can be found in abundance in the forest's waters. Larger wildlife species include white-tailed deer, moose, Canadian lynx, American black bear, and the gray or timber wolf. Northern Minnesota has the largest population of gray wolves in the lower 48 states, with approximately 300-400 wolves within the boundaries of the Superior National Forest.[9] Located at the northern edge of the range of the hummingbird and near the southern edge of the range of the Canada jay, the forest has 163 nesting species of birds, the largest number of any national forest.[5] Species include the bald eagle and other raptors, the ubiquitous common loon, and northern waterfowl.

The Superior National Forest maintains developed fee campgrounds with amenities like drinking water and garbage disposal, rustic campgrounds without drinking water or fees, and backcountry campsites with only a pit latrine and a fire grate, and no permits or fees.[10] Additionally, dispersed camping is permitted anywhere on undeveloped public land without permit or fee.[10] An exception is made for the designated wilderness of the Boundary Waters Canoe Area, which requires special permits for entrance.

Parts of this article were taken from the Forest Service website. As a work of the U.S. federal government, the text is in the public domain.