From Infogalactic: the planetary knowledge core
Jump to: navigation, search
This article is about the philosophical concept. For other uses, see Supernatural (disambiguation).
Not to be confused with Paranormal or Supernatural (U.S. TV series). 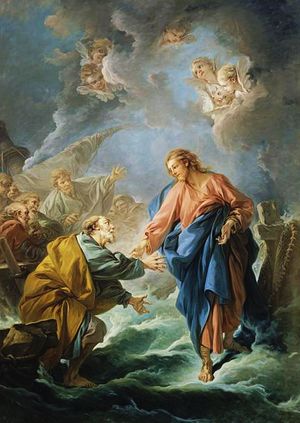 One of the many supernatural acts attributed to Jesus, walking on water. Art by François Boucher Cathédrale Saint-Louis (1766) Versailles

The supernatural (Medieval Latin: supernātūrālis: supra "above" + naturalis "natural", first used: 1520–1530 AD)[1][2] is that which is not subject to the laws of physics or, more figuratively, that which is said to exist above and beyond nature.

The metaphysical considerations of the existence of the supernatural can be difficult to approach as an exercise in philosophy or theology because any dependencies on its antithesis, the natural, will ultimately have to be inverted or rejected.

One complicating factor is that there is disagreement about the definition of "natural" and the limits of naturalism. Concepts in the supernatural domain are closely related to concepts in religious spirituality and occultism or spiritualism.

For sometimes we use the word nature for that Author of nature whom the schoolmen, harshly enough, call natura naturans, as when it is said that nature hath made man partly corporeal and partly immaterial. Sometimes we mean by the nature of a thing the essence, or that which the schoolmen scruple not to call the quiddity of a thing, namely, the attribute or attributes on whose score it is what it is, whether the thing be corporeal or not, as when we attempt to define the nature of an angel, or of a triangle, or of a fluid body, as such. Sometimes we take nature for an internal principle of motion, as when we say that a stone let fall in the air is by nature carried towards the centre of the earth, and, on the contrary, that fire or flame does naturally move upwards toward heaven. Sometimes we understand by nature the established course of things, as when we say that nature makes the night succeed the day, nature hath made respiration necessary to the life of men. Sometimes we take nature for an aggregate of powers belonging to a body, especially a living one, as when physicians say that nature is strong or weak or spent, or that in such or such diseases nature left to herself will do the cure. Sometimes we take nature for the universe, or system of the corporeal works of God, as when it is said of a phoenix, or a chimera, that there is no such thing in nature, i.e. in the world. And sometimes too, and that most commonly, we would express by nature a semi-deity or other strange kind of being, such as this discourse examines the notion of.

And besides these more absolute acceptions, if I may so call them, of the word nature, it has divers others (more relative), as nature is wont to be set or in opposition or contradistinction to other things, as when we say of a stone when it falls downwards that it does it by a natural motion, but that if it be thrown upwards its motion that way is violent. So chemists distinguish vitriol into natural and fictitious, or made by art, i.e. by the intervention of human power or skill; so it is said that water, kept suspended in a sucking pump, is not in its natural place, as that is which is stagnant in the well. We say also that wicked men are still in the state of nature, but the regenerate in a state of grace; that cures wrought by medicines are natural operations; but the miraculous ones wrought by Christ and his apostles were supernatural.[3]

— Robert Boyle, A Free Enquiry into the Vulgarly Received Notion of Nature

The term "supernatural" is often used interchangeably with paranormal or preternatural — the latter typically limited to an adjective for describing abilities which appear to exceed the bounds of possibility.[4] Epistemologically, the relationship between the supernatural and the natural is indistinct in terms of natural phenomena that, ex hypothesi, violate the laws of nature, in so far as such laws are realistically accountable.

Parapsychologists use the term psi to refer to an assumed unitary force underlying the phenomena they study. Psi is defined in the Journal of Parapsychology as “a general term used to identify personal factors or processes in nature which transcend accepted laws” (1948: 311) and “which are non-physical in nature” (1962:310), and it is used to cover both extrasensory perception (ESP), an “awareness of or response to an external event or influence not apprehended by sensory means” (1962:309) or inferred from sensory knowledge, and psychokinesis (PK), “the direct influence exerted on a physical system by a subject without any known intermediate energy or instrumentation” (1945:305).[5]

Many supporters of supernatural explanations believe that past, present, and future complexities and mysteries of the universe cannot be explained solely by naturalistic means and argue that it is reasonable to assume that a non-natural entity or entities resolve the unexplained.

Views on the "supernatural" vary, for example it may be seen as:

The supernatural is a feature of the philosophical traditions of Neoplatonism[8] and Scholasticism.[9] In contrast, the philosophy of Metaphysical naturalism argues for the conclusion that there are no supernatural entities, object, or powers.

Most religions include elements of belief in the supernatural (e.g. miraculous works by recognized Saints, the Assumption of Mary, etc.) while also often featuring prominently in the study of the paranormal and occultism.

Main article: The nature of God in Western theology 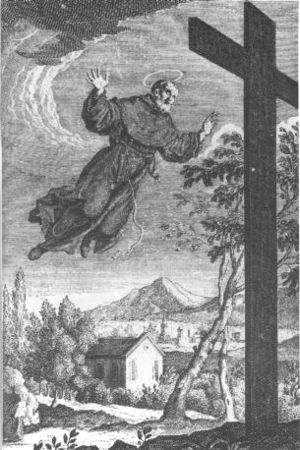 The patron saint of air travelers, aviators, astronauts, people with a mental handicap, test takers, and poor students is Saint Joseph of Cupertino, who is said to have been gifted with supernatural flight.[10]
Main article: Supernatural order

In Catholic theology, the supernatural order is, according to New Advent, defined as "the ensemble of effects exceeding the powers of the created universe and gratuitously produced by God for the purpose of raising the rational creature above its native sphere to a God-like life and destiny."[11] The Modern Catholic Dictionary defines it as "[t]he sum total of heavenly destiny and all the divinely established means of reaching that destiny, which surpass the mere powers and capacities of human nature."[12]

Process theology is a school of thought influenced by the metaphysical process philosophy of Alfred North Whitehead (1861–1947) and further developed by Charles Hartshorne (1897–2000).

It is not possible, in process metaphysics, to conceive divine activity as a “supernatural” intervention into the “natural” order of events. Process theists usually regard the distinction between the supernatural and the natural as a by-product of the doctrine of creation ex nihilo. In process thought, there is no such thing as a realm of the natural in contrast to that which is supernatural. On the other hand, if “the natural” is defined more neutrally as “what is in the nature of things,” then process metaphysics characterizes the natural as the creative activity of actual entities. In Whitehead's words, “It lies in the nature of things that the many enter into complex unity” (Whitehead 1978, 21). It is tempting to emphasize process theism's denial of the supernatural and thereby highlight what the process God cannot do in comparison to what the traditional God can do (that is, to bring something from nothing). In fairness, however, equal stress should be placed on process theism's denial of the natural (as traditionally conceived) so that one may highlight what the creatures cannot do, in traditional theism, in comparison to what they can do in process metaphysics (that is, to be part creators of the world with God).[13]

— Donald Viney, "Process Theism" in The Stanford Encyclopedia of Philosophy