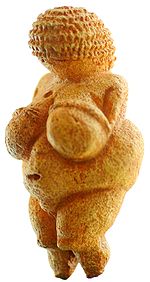 A supernormal stimulus or superstimulus is an exaggerated version of a stimulus to which there is an existing response tendency, or any stimulus that elicits a response more strongly than the stimulus for which it evolved.

For example, when it comes to eggs, a bird can be made to prefer the artificial versions to their own,[1] and humans can be similarly exploited by junk food.[2] The idea is that the elicited behaviours evolved for the "normal" stimuli of the ancestor's natural environment, but the behaviours are now hijacked by the supernormal stimulus.

British academic Nigel Spivey demonstrates the effect in the first episode of the 2005 BBC documentary series How Art Made the World to illustrate neuroscientist Vilayanur S. Ramachandran's speculation that this might be the reason for the grossly exaggerated body image demonstrated in works of art from the Venus of Willendorf right up to the present day.

In 1979, the term was used by Richard Dawkins and John Krebs to refer to the exaggeration of pre-existing signs induced by social parasites, noting the manipulation of baby birds (hosts) from these, to illustrate the effectiveness of those signals[3]

Konrad Lorenz observed the same phenomenon in birds that select brooding eggs that resembled those of their own species but were larger. Niko Tinbergen, following his extensive analysis of the stimulus features that elicited food-begging in the chick of the herring gull, constructed an artificial stimulus consisting of a red knitting needle with three white bands painted around it; this elicited a stronger response than an accurate three-dimensional model of the parent's head (white) and bill (yellow with a red spot).[4]

Tinbergen and his students studied other variations of this effect. He experimented with dummy plaster eggs of various sizes and markings finding that most birds preferred ones with more exaggerated markings than their own, more saturated versions of their color, and a larger size than their own. Small songbirds which laid light blue grey-dappled eggs preferred to sit on a bright blue black polka-dotted dummy so large they slid off repeatedly. Territorial male stickleback fish would attack wooden floats with red undersides—attacking them more vigorously than invading male sticklebacks if the underside were redder.[1]

Lorenz and Tinbergen accounted for the supernormal stimulus effect in terms of the concept of the innate releasing mechanism; however this concept is no longer widely used.[citation needed] The core observation that simple features of stimuli may be sufficient to trigger a complex response remains valid, however.

In 1983, entomologists Darryl Gwynne and David Rentz reported on Julodimorpha beetles observed attempting to copulate with discarded brown stubbies (a type of beer bottles) studded with tubercules (flattened glass beads).[5] This work won them the 2011 Ig Nobel Prize in biology.[6]

Another example of this is the study made by Mauck and colleagues, where they evaluated the effects of a plant pathogen named cucumber mosaic virus or CMV. This study showed that the aphids preferred the healthy plants but are still attracted by the infected plants, because of the manipulation of volatile compounds used by plants to attract them[7]

In 2001, Holen et al., analyzed the evolutionary stability of hosts manipulation through exaggerated signals. Their model indicated that intensity of parasitic signals must be below a threshold to ensure acceptance from host. This threshold depends directly on the range of parasitism[8]

For them, the only evolutionary stable strategy is when the host accepts all signs of the parasite with optimal intensity, which must be below the threshold; if this is not the case, the host can use these signals to identify the parasite[8]

Harvard psychologist Deirdre Barrett argues that supernormal stimulation govern the behavior of humans as powerfully as that of animals. In her 2010 book, Supernormal Stimuli: How Primal Urges Overran Their Evolutionary Purpose,[9] she examines the impact of supernormal stimuli on the diversion of impulses for nurturing, sexuality, romance, territoriality, defense, and the entertainment industry’s hijacking of our social instincts. In the earlier book, Waistland,[2] she explains junk food as an exaggerated stimulus to cravings for salt, sugar, and fats and television as an exaggeration of social cues of laughter, smiling faces and attention-grabbing action. Modern artifacts may activate instinctive responses which evolved in a world without magazine centerfolds or double cheeseburgers, where breast development was a sign of health and fertility in a prospective mate, and fat was a rare and vital nutrient.

In a cross-cultural study, Doyle and Pazhoohi showed that surgically augmented breasts are supernormal stimuli, and they are more attractive than natural breasts, regardless of their size.[10] Also in a theoretical paper, Doyle proposed that how women walk creates supernormal stimuli through continuously alternating motion of the waist and hips causing peak shifts in perceptions of physical attractiveness involving women’s waist-to-hip ratio.[11]