The Supplingburger dynasty was the dynasty of Lothair II, Holy Roman Emperor and King of the Romans from 1125 to 1137. The family is named after their ancestral seat Süpplingenburg northwest of Helmstedt in the Duchy of Saxony.

In 1013, one Saxon noble named Liutger was mentioned as a count in the Harzgau subdivision of Eastphalia. His grandson Count Gebhard, father of Emperor Lothair, possibly acquired the castle of Süpplingenburg about 1060 by his marriage with Hedwig, a daughter of the Bavarian count Frederick of Formbach and his wife Gertrud, herself a descendant of the Saxon margrave Dietrich of Haldensleben who secondly married the Billung duke Ordulf of Saxony upon Count Frederick's death.

With both Saxon and Bavarian origins, the Süpplingenburg dynasty was a political opponent of the Salian dynasty and the Swabian House of Hohenstaufen. Lothair of Supplinburg's father Gebhard had died in the 1075 Battle of Langensalza during the Saxon Rebellion against troops loyal to the Salian emperor Henry IV, whereafter his mother Hedwig secondly married Duke Theodoric II of Lorraine. 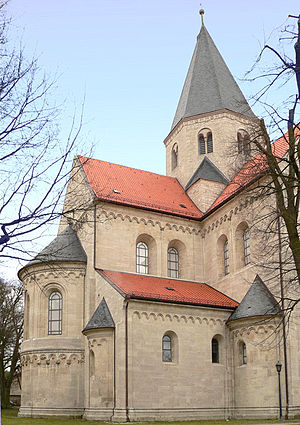 Burial place of Lothair II: Kaiserdom in Königslutter, founded by the emperor in 1135

After years of purchasing lands or gaining them via inheritance or marriage alliances throughout Saxony, Lothair gained the domains of the Billung, Nordheim and Brunswick families and became one of the dominant landowners in the northern duchy. He was made Duke of Saxony in 1106 by Emperor Henry V in exchange for his help against Henry's father, Henry IV.[1] Emboldened by the promotion, and incensed over the imposition of a new tax on ducal lords, Lothair subsequently revolted against Henry's rule and denied Henry's ability to rule Saxony during the Investiture Controversy. In 1112, Lothair of Supplinburg rose in arms against Henry V, but was easily quelled. In 1113, however, a quarrel over the succession to the counties of Weimar and Orlamünde gave occasion for a fresh outbreak on the part of Lothair, whose troops were defeated at the Battle of Warnstadt,[2] though the duke was later pardoned. In 1115 his forces defeated those of the Emperor in the Battle of Welfesholz.[3]

When Emperor Henry V, who was the last male member of the Salian dynasty, had died without heirs in 1125, a controversy arose about the succession. Duke Frederick II and Conrad, the two current male Hohenstaufen, by their mother Agnes were grandsons of late Emperor Henry IV and nephews of Henry V. Frederick attempted to succeed to the throne of the Holy Roman Emperor (formally known as the King of the Romans) through a customary election, but lost to the Saxon duke Lothair of Supplinburg. A civil war between Frederick's dynasty and Lothair's ended with Frederick's submission in 1134.

The Süpplingenburg dynasty was only short-living. By his wife, Richenza of Northeim, Emperor Lothair had only one surviving child, a daughter Gertrude, born April 18, 1115. In order to secure Welf support for his election, Lothair married Gertrude to Henry the Proud, the duke of Bavaria, on May 29, 1127.[4] Their son was Henry the Lion.

After Lothair's death in 1137, the Hohenstaufen Conrad was elected King as Conrad III. When Henry the Proud, son-in-law and heir of Lothair and the most powerful prince in Germany, who had been passed over in the election, refused to acknowledge the new king, Conrad III deprived him of all his territories.