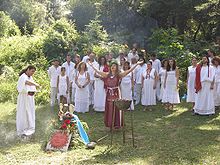 A ceremony at the annual Prometheia festival in Greece, June 2006.

The Supreme Council of Ethnic Hellenes (Ύπατο Συμβούλιο των Ελλήνων Εθνικών, Ýpato Symvoúlio to̱n Ellí̱no̱n Ethnikó̱n), commonly known as YSEE, is a non-profit umbrella organisation in Greece established in 1997 to defend and restore the Hellenic ethnic religion in contemporary Greek society. Since their founding, YSEE has distributed over 200 letters of protest and press releases aimed at increasing religious freedom for Pagans in Greece and hosted over 200 educational events.

The group itself estimates that perhaps 2.000 Greeks practice in the Hellenic religious tradition and another 100.000 have "some sort of interest",[1] although this has not been independently verified and the group admits that the numbers of adherents are difficult to estimate. These Greek Pagans face varying degrees of discrimination in Greece,[2][3][4] which is overwhelmingly Orthodox Christian.[5] One of YSEE's main goals is to obtain legal recognition for their religion, which is not acknowledged as a "legal person of public law" in Greece. One consequence of this lack of legal recognition is that Pagan Greeks have been prevented from establishing permanent places of worship. Greek courts unbanned the worship of polytheistic gods in 2006.[2]

The YSEE is a founding member of the European Congress of Ethnic Religions and hosted the seventh annual WCER Congress in June 2004. YSEE is also a member of the European Union's action programme to combat discrimination. In addition to their political activities, YSEE regularly holds traditional Hellenic religious rituals and ceremonies, including an annual Prometheia festival at Mount Olympus. About 2500 people attended the Prometheia in 2005, making it easily the largest such gathering in the modern world.[6] The festival includes talks on philosophical and religious topics, theatrical and artistic displays, and religious rituals and namegiving ceremonies.

The Supreme Council of Ethnic Hellenes has formed chapters in the United States, Australia, Canada, Germany and Brazil, offering lectures, events, and support for practitioners of Hellenism outside of Greece.