From Infogalactic: the planetary knowledge core
Jump to: navigation, search
Not to be confused with the Supreme Court of Judicature.

The Supreme Court of the United Kingdom is the supreme court in all matters under English and Welsh law, Northern Ireland law and Scottish civil law. It is the court of last resort and the highest appellate court in the United Kingdom, although the High Court of Justiciary remains the court of last resort for criminal law in Scotland. The Supreme Court also has jurisdiction to resolve disputes relating to devolution in the United Kingdom and concerning the legal powers of the three devolved governments (in Scotland, Wales and Northern Ireland) or laws made by the devolved legislatures.

The Supreme Court was established by Part 3 of the Constitutional Reform Act 2005 and started work on 1 October 2009.[1][2] It assumed the judicial functions of the House of Lords, which had been exercised by the Lords of Appeal in Ordinary (commonly called "Law Lords"), the 12 judges appointed as members of the House of Lords to carry out its judicial business. Its jurisdiction over devolution matters had previously been exercised by the Judicial Committee of the Privy Council.

The current President of the Supreme Court is Lord Neuberger of Abbotsbury, and its Deputy President is Baroness Hale of Richmond.

The main role of the Supreme Court is to hear appeals from courts in the United Kingdom's three legal systems: England and Wales, Northern Ireland, and Scotland (English and Welsh law differ only to the extent that the National Assembly for Wales makes laws for Wales that differ from those in England, and the two countries have a shared court system). The Supreme Court acts as the highest court for civil appeals from the Court of Session in Scotland, but the highest appeal for criminal cases is kept in Scotland.[6]

For civil cases decided prior to September 2015, permission to appeal from the Court of Session is not required and any such case can proceed to the Supreme Court of the United Kingdom if two Advocates certify that an appeal is suitable. The entry into force of the Courts Reform (Scotland) Act 2014 has essentially brought the procedure for current and future Scottish civil cases into line with England, Wales and Northern Ireland,[7] where permission to appeal is required, either from the Court of Appeal or from a Justice of the Supreme Court itself.

The Supreme Court's focus is on cases that raise points of law of general public importance. As with the former Appellate Committee of the House of Lords, appeals from many fields of law are likely to be selected for hearing, including commercial disputes, family matters, judicial review claims against public authorities and issues under the Human Rights Act 1998. The Supreme Court also hears some criminal appeals, but not from Scotland, as there is no general right of appeal from the High Court of Justiciary, Scotland's highest criminal court, other than with respect to devolution issues.

The Supreme Court also determines "devolution issues" (as defined by the Scotland Act 1998, the Northern Ireland Act 1998 and the Government of Wales Act 2006). These are legal proceedings about the powers of the three devolved administrations—the Northern Ireland Executive and Northern Ireland Assembly, the Scottish Government and the Scottish Parliament, and the Welsh Government and the National Assembly for Wales. Devolution issues were previously heard by the Judicial Committee of the Privy Council and most are about compliance with rights under the European Convention on Human Rights, brought into national law by the Devolution Acts and the Human Rights Act 1998.

The twelve justices do not all hear every case. Typically a case is heard by a panel of five justices, though sometimes the panel may consist of three, seven or nine members. All twelve justices are also members of the Judicial Committee of the Privy Council and spend some of their time in that capacity.

The creation of a Supreme Court for the United Kingdom was first mooted in a consulation paper published by the Department of Constitutional Affairs in July 2003.[8] Although the paper noted that there had been no criticism of the then-current Law Lords or any indication of an actual bias, it argued that the separation of the judicial functions of the Judicial Committee of the House of Lords from the legislative functions of the House of Lords should be made explicit. The paper noted the following concerns:

The main argument against a new Supreme Court was that the previous system had worked well and kept costs down.[10] Reformers expressed concern that this second main example of mixture of the legislative, judicial and executive might conflict with professed values under the Universal Declaration of Human Rights. Officials who make or execute laws have an interest in court cases that put those laws to the test. When the state invests judicial authority in those officials or even their day-to-day colleagues, it puts the independence and impartiality of the courts at risk. Consequently, it was hypothesised closely connected decisions of the Law Lords to debates had by friends or on which the Lord Chancellor had expressed a view might be challenged on Human Rights grounds on the basis that they had not constituted a fair trial.[11]

Lord Neuberger of Abbotsbury, later President of the Supreme Court, expressed fear that the new court could make itself more powerful than the House of Lords committee it succeeded, saying that there is a real risk of "judges arrogating to themselves greater power than they have at the moment". Lord Phillips said such an outcome was "a possibility", but was "unlikely".[12]

The reforms were controversial and were brought forward with little consultation but were subsequently extensively debated in Parliament.[13] During 2004, a select committee of the House of Lords scrutinised the arguments for and against setting up a new court.[14] The Government estimated the set-up cost of the Supreme Court at £56.9 million.[15]

The Supreme Court was established by Part 3 of the Constitutional Reform Act 2005 and started work on 1 October 2009. It assumed the judicial functions of the House of Lords, which were exercised by the Lords of Appeal in Ordinary (commonly called "Law Lords"), the 12 professional judges appointed as members of the House of Lords to carry out its judicial business. Its jurisdiction over devolution matters had previously been held by the Judicial Committee of the Privy Council.

The first case heard by the Supreme Court was HM Treasury v Ahmad, which concerned "the separation of powers", according to Lord Phillips, its inaugural President. At issue was the extent to which Parliament has, by the United Nations Act 1946, delegated to the executive the power to legislate. Resolution of this issue depended upon the approach properly to be adopted by the court in interpreting legislation which may affect fundamental rights at common law or under the European Convention on Human Rights.

Other supreme courts in the United Kingdom

The High Court of Justiciary, the Court of Session, and the Office of the Accountant of Court comprise the College of Justice, and are known as the Supreme Courts of Scotland.[16]

Main article: Justice of the Supreme Court of the United Kingdom

Ten Lords of Appeal in Ordinary (Law Lords) holding office on 1 October 2009 became the first justices of the 12-member Supreme Court.[20] The 11th place on the Supreme Court was filled by Lord Clarke of Stone-cum-Ebony (formerly the Master of the Rolls), who was the first Justice to be appointed directly to the Supreme Court.[21] One of the former Law Lords, Lord Neuberger of Abbotsbury, was appointed to replace Lord Clarke as Master of the Rolls,[22] and so did not move to the new court. Sir John Dyson became the 12th and final justice of the Supreme Court on 13 April 2010, becoming entitled at the same moment to the courtesy style "Lord Dyson".[23]

On 30 September 2010 Lord Saville of Newdigate became the first Justice to retire,[25] followed by Lord Collins of Mapesbury on 7 May 2011, although the latter remained as an acting Justice until the end of July 2011.

In June 2011 Lord Rodger of Earlsferry became the first Justice to die in office, after a short illness.[26]

In addition to the twelve permanent Justices, the President may request other senior judges, drawn from two groups, to sit as "acting judges" of the Supreme Court.[27]

If the Lord Chancellor approves the person selected by the commission, the Prime Minister must then recommend that person to the Monarch for appointment.[29]

New judges appointed to the Supreme Court after its creation will not necessarily receive peerages; however, they are given the courtesy title of Lord or Lady upon appointment.[30][31] The President and Deputy President are appointed to those roles rather than being the most senior by tenure in office. 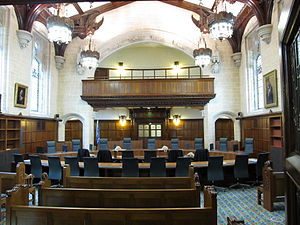 Court 1 in the Supreme Court building

The court is housed in Middlesex Guildhall — which it shares with the Judicial Committee of the Privy Council — in the City of Westminster.

The Constitutional Reform Act 2005 gave time for a suitable building to be found and fitted out before the Law Lords moved out of the Houses of Parliament, where they had previously used a series of rooms in the Palace of Westminster.[32]

After a lengthy survey of suitable sites, including Somerset House, the Government announced that the new court would be at the Middlesex Guildhall, in Parliament Square, Westminster. That decision was examined by the Constitutional Affairs Committee,[33] and the grant of planning permission by Westminster City Council for refurbishment works was challenged in a judicial review by the conservation group SAVE Britain's Heritage.[34] It was also reported that English Heritage had been put under great pressure to approve the alterations.[35] Feilden + Mawson, supported by Foster & Partners, were the appointed architects.[36]

The building had been used as the Middlesex Quarter Sessions House, adding later its County Council chamber, and lastly as a Crown Court. 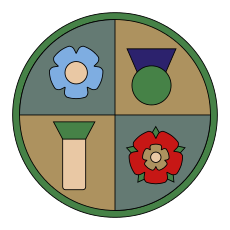 The emblem with stylised depictions of the four floral emblems.

The official badge of the Supreme Court was granted by the College of Arms in October 2008.[37] It comprises both the Greek letter omega (representing finality) and the symbol of Libra (symbolising the scales of justice), in addition to the four floral emblems of the United Kingdom: a Tudor rose, representing England, conjoined with the leaves of a leek, representing Wales; a flax blossom for Northern Ireland; and a thistle, representing Scotland.[38]

Two adapted versions of its official badge are used by the Supreme Court. One features the words "The Supreme Court" and the letter omega in black (in the official badge granted by the College of Arms, the interior of the Latin and Greek letters are gold and white, respectively), and displays a simplified version of the crown (also in black) and larger, stylised versions of the floral emblems; this modified version of the badge is featured on the new Supreme Court website,[39] as well as in the forms that will be used by the Supreme Court.[40] A further variant on the above omits the crown entirely and is featured prominently throughout the building.[41]

Another emblem is formed from a more abstract set of depictions of the four floral emblems and is used in the carpets of the Middlesex Guildhall designed by Sir Peter Blake, creator of such works as the cover of The Beatles' 1967 album, Sgt. Pepper's Lonely Hearts Club Band.[42][43]