Supreme Head of the Church of England 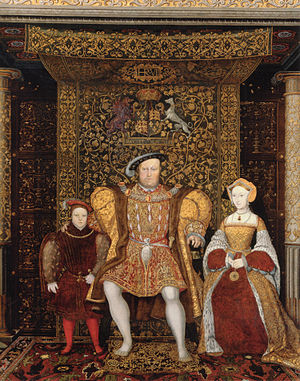 The title was created for King Henry VIII, who was responsible for the English Catholic church breaking away from the authority of the Roman Catholic Church after the Pope excommunicated Henry in 1533 over his divorce from Catherine of Aragon. By 1536, Henry had broken with Rome, seized the church's assets in England and declared the Church of England as the established church with himself as its head. The Act of Supremacy of 1534 confirmed the King's status as having supremacy over the church and required the nobility to swear an oath recognising Henry's supremacy.[1] Henry's daughter, Queen Mary I, a staunch Catholic, attempted to restore the English church's allegiance to the pope and repealed the Act of Supremacy in 1555.[2] Her half-sister, the Protestant Elizabeth I, took the throne in 1558 and the next year, Parliament passed the Act of Supremacy of 1559 that restored the original act.[3] The new Oath of Supremacy that nobles were required to swear gave the queen's title as Supreme Governor of the church rather than Supreme Head, to avoid the charge that the monarchy was claiming divinity or usurping Christ, whom the Bible explicitly identifies as Head of the Church.