Muslims surrender to Spain: Boabdil gives the Granada key to Ferdinand and Isabella 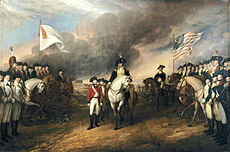 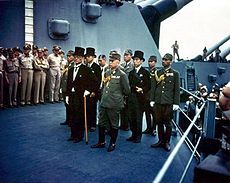 Surrender, in military terms, is the relinquishment of control over territory, combatants, fortifications, ships or armament to another power. A surrender may be accomplished peacefully, without fighting, or it may be the result of defeat in battle. A sovereign state may surrender following defeat in a war, usually by signing a peace treaty or capitulation agreement. A battlefield surrender, either by individuals or when ordered by officers, normally results in those surrendering becoming prisoners of war.

A white flag or handkerchief is often taken or intended as a signal of a desire to surrender, but in international law, it simply represents a desire for a parley that may or may not result in a formal surrender. Normally, a surrender will involve the handing over of weapons; the commanding officer of a surrendering force symbolically offers his sword to the victorious commander. Individual combatants can indicate a surrender by discarding weapons and raising their hands empty and open above their heads; a surrendering tank commander should point the tank's turret away from opposing combatants. Flags and ensigns are hauled down or furled, and ships' colors are struck or the raising of a white flag to the masts signals a surrender.

When the parties agree to terms, the surrender may be conditional: if the surrendering party promises to submit only after the victor makes certain promises. Otherwise, it is a surrender at discretion (unconditional surrender); the victor makes no promises of treatment other than those provided by the laws and customs of war, most of which are laid out in the Hague Convention of 1907 and the Geneva Conventions. Normally, a belligerent will agree to surrender unconditionally only if completely incapable of continuing hostilities. Traditionally, a surrender ceremony was accompanied by the honors of war.

The Third Geneva Convention states that prisoners of war should not be mistreated or abused. US Army policy, for example, requires that surrendered persons should be secured and safeguarded while being evacuated from the battlefield. Similar regulations exist in most modern militaries.

While not a formal military law, the Code of the US Fighting Force disallows surrender unless "all reasonable means of resistance [are] exhausted and... certain death the only alternative": the Code states, "I will never surrender of my own free will. If in command, I will never surrender the members of my command while they still have the means to resist."

False surrender is a type of perfidy in the context of war. It is a war crime under Protocol I of the Geneva Convention. False surrenders are usually used to draw the enemy out of cover to attack them off guard, but they may be used in larger operations such as during a siege. Accounts of false surrender can be found relatively frequently throughout history. One of the more infamous examples was the alleged false surrender of British troops at Kilmichael, during the Irish War of Independence.