Surrey Satellite Technology Ltd, or SSTL, is a spin-off company of the University of Surrey, now majority-owned by EADS Astrium, that builds and operates small satellites. Its satellites began as amateur radio satellites known by the UoSAT (University of Surrey SATELLITE) name or by an OSCAR (Orbital Satellite Carrying Amateur Radio) designation. SSTL cooperates with the University's Surrey Space Centre, which does research into satellite and space topics.

SSTL moved into remote sensing services with the launch of the Disaster Monitoring Constellation (DMC) in 2002 and an associated child company, DMC International Imaging. SSTL also adopted the Internet Protocol for the DMC satellites it builds and operates, migrating from use of the AX.25 protocol popular in amateur radio. The CLEO Cisco router in Low Earth Orbit, on board the UK-DMC satellite along with a network of payloads, takes advantage of this adoption of the Internet Protocol. SSTL is also developing a new Geostationary Minisatellite Platform-Transfer orbit variant (GMP-T) aimed at the telecommunications market under the brand name SSTL-900.

SSTL was awarded the Queen's Award for Technological Achievement in 1998, and the Queen's Awards for Enterprise in 2005. In 2006 SSTL won the Times Higher Education Supplement award for outstanding contribution to innovation and technology.[5] In 2009 SSTL ranked 89 out of the 997 companies that took part in the Sunday Times Top 100 companies to work for.[6]

EarthCARE [11]
Customer: Astrium GmbH (now Airbus Defence and Space)
Mission objective: As part of the Earth Observation Envelope Programme (EOEP) led by ESA to cover primary research objectives, the EarthCARE mission will be the third Earth Explorer Core Mission. The mission will be implemented in collaboration with Japan Aerospace Exploration Agency who will provide one of the core instruments. The EarthCARE mission has been specifically defined with the basic objective of improving the understanding of cloud-aerosol-radiation interactions so as to include them correctly and reliably in climate and numerical weather prediction models. EarthCARE will meet these objectives by measuring simultaneously the vertical structure and horizontal distribution of cloud and aerosol fields together with outgoing radiation over all climate zones. SSTL's role in this mission is to provide a Multi Spectral Imager (MSI) Instrument by development, manufacturing, testing and operations support during Phase B/C/D/E1.[12]

STRaND-2
[13] Surrey Training, Research and Nanosatellite Development 2 intends to launch[when?] several new technologies for space applications and demonstration including the use of Kinect laser technology to dock nanosatellites together.

SSTL-100
SSTL 100 was used in Disaster Monitoring Constellation (DMC). The SSTL-100 provides the core capability to carry a wide range of payloads. Active variants include SSTL-100i 32 (1st generation DMC) and SSTL-100i 22 (2nd generation DMC).[citation needed]
Surrey is developing a satellite bus "optimized to the design of LauncherOne", under development by Virgin Galactic[15] 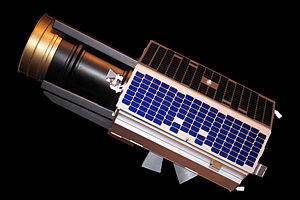 Model of a SSTL-300 satellite