Surry County is a county located in the U.S. state of North Carolina. As of the 2010 census, the population was 73,673.[1] Its county seat is Dobson,[2] and its largest city is Mount Airy.

The county was formed in 1771 from Rowan County. It was named for the county of Surrey in England, birthplace of William Tryon, Governor of North Carolina from 1765 to 1771.

In 1777 parts of Surry County and Washington District (now Washington County, Tennessee) were combined to form Wilkes County. The first permanent courthouse was established at Richmond in 1779, what is now the modern-day Old Richmond Township in Forsyth County near Donnaha. However, in 1789 the eastern half of Surry County became Stokes County, thus making the Richmond site unusable for either county. In 1790, the county seat was moved to Rockford where it remained for over half a century. In 1850 the half of the county's remaining territory south of the Yadkin River became Yadkin County. The town of Dobson was established in 1853 to be the new county seat.

The whole county is generally considered part of the Piedmont Triad metropolitan area. Surry County is located in the Yadkin Valley AVA, an American Viticultural Area. Wines made from grapes grown in Surry County may carry the appellation Yadkin Valley on their label.

Surry County is located both within the Piedmont region of central North Carolina and in the Appalachian Mountains region of western North Carolina. Most of the eastern two-thirds of the county lies within the Piedmont, a region of gently rolling hills and valleys. However, the Piedmont of Surry County also contains a small portion of the Sauratown Mountains; Surry County marks the western end of the Sauratown Mountain range. The western third of the county lies within the Blue Ridge Mountains, and they dominate the county's western horizon. The mountain passes (called "gaps" locally) are notorious for their occasional high winds, which can force automobiles and even large Eighteen wheeler trucks off the highways which lead through the passes. As a result, high wind advisories issued by the National Weather Service are not uncommon. The highest point in Surry County is Fisher Peak in the Blue Ridge; it rises to 3,570 feet (1,088 m) above sea level. However, the best-known peak in Surry County is not the highest. That honor goes to Pilot Mountain, an isolated monadnock and a North Carolina landmark. Pilot Mountain sharply rises some 2,421 feet (738 m) above the surrounding countryside, and can be seen for miles.

Another notable peak in Surry County is Cumberland Knob, in the northwest corner of the county, which was the starting point of the construction of the Blue Ridge Parkway. The following table provides a list of some of the more prominent mountains of the county. 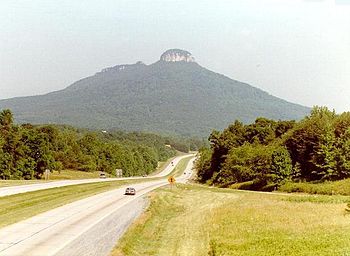 While there are many creeks and streams in Surry County, there are three recognized major rivers in the county, the Ararat, the Fisher, and the Mitchell. All three flow southward and are tributaries of the Yadkin River, which forms the southern border of Surry County. The Yadkin River is the northern component of the Pee Dee River which flows to the Atlantic Ocean near Georgetown, South Carolina.

The five-member Board of County Commissioners are elected from single-member districts for four-year staggered terms, with elections in even-numbered years. The board elects a chair and vice-chair, who serve 12-month terms.

Surry County is a member of the Piedmont Triad Regional Council.

Surry County is home to three local newspapers, the The Mount Airy News of Mount Airy, The Pilot in Pilot Mountain and The Tribune of Elkin. Additionally, the larger daily Winston-Salem Journal covers news and events in the county. One local newspaper, the The Messenger in Mount Airy, ceased operation in approximately 2011.

WIFM in Elkin is the county's only FM radio station. The county also has three AM stations, WYZD in Dobson, as well as WPAQ and WSYD in Mount Airy. There are no broadcast television stations in Surry County.

Surry County is part of the Piedmont Triad radio and television market but many broadcasts from the Charlotte market also can be received in Surry County.

With 538 sq mi (1,390 km2) of total land area and only four incorporated municipalities, much of Surry County remains rural. Like much of rural North Carolina, Surry County is dotted with many unincorporated communities, some with rather colorful names. Like many rural communities, these places are centered around churches, schools, post offices, and other common gathering places that developed to serve the needs of a mostly agricultural society.

The United States Geographic Names Information System includes 68 populated places in Surry County. Four of these are the county's incorporated municipalities and seven are historical place names. Of the remaining 57, three have since been annexed by an existing city or town. Elkin Valley and North Elkin have long been part of the town of Elkin and the city of Mount Airy will complete in summer 2007 its annexation of the remaining portions of Hollyview Forest-Highland Park that remain outside of the city.[11] Additionally, the communities of Jenkinstown and Blevins Store frequently show up on county maps, although they are not officially classified as populated places by the GNIS.