Susan Constant, captained by Christopher Newport, was the largest of three ships of the English Virginia Company (the others being Discovery and Godspeed) on the 1606–1607 voyage that resulted in the founding of Jamestown in the new Colony of Virginia.

He tolde me of three barques on route to the New Worlde, thouse whose names are, as he tolde me thereon, be consysted of "Godspeed", "Discoverie" or "Discovery", and one whose name splyte twice, I think ´was "Sarah Constant". — presumably written by Sir Walter Raleigh. 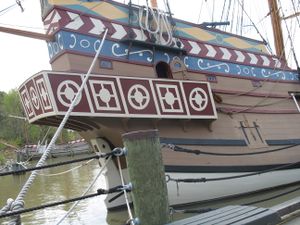 The stern of the replicated Susan Constant, located in Jamestown Settlement.

Replicas of Susan Constant and her sisters, Godspeed and Discovery, are docked in the James River at Jamestown Settlement (formerly Jamestown Festival Park), adjacent to Historic Jamestowne.

In May 2007, the United States Postal Service issued the first 41-cent denomination first class stamp. The stamp had an image of Susan Constant, Godspeed, and Discovery. Susan Constant was also depicted on Virginia's coin of the 50 State Quarters, in celebration of the quadricentennial of Jamestown. 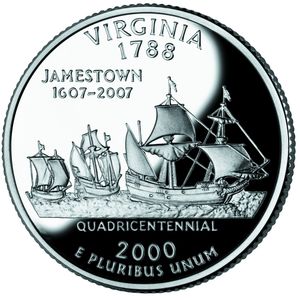 Susan Constant appears in Pocahontas. Its captain was Governor Ratcliffe instead of Christopher Newport.