From Infogalactic: the planetary knowledge core
Jump to: navigation, search
This article is about the river in the southern United States. For the Stephen Foster song, see Old Folks at Home.

The Suwannee River (also spelled Suwanee River) is a major river of southern Georgia and northern Florida in the United States. It is a wild blackwater river, about 246 miles (396 km) long.[1] The Suwannee River is the site of the prehistoric Suwanee Straits which separated peninsular Florida from the panhandle.

The river rises in the Okefenokee Swamp, emerging at Fargo, Georgia. The river then runs southwest into Florida, dropping in elevation through limestone layers resulting in a rare Florida whitewater rapid. It then turns west near White Springs, Florida, receiving the waters of the Alapaha and Withlacoochee rivers, which together drain much of south-central Georgia. This meandering forms the southern border of Hamilton County, Florida. It then bends south near Ellaville, Florida, then southeast near Luraville, Florida, receives the Santa Fe River from the east just below Branford, then south again to the Gulf of Mexico near the town of Suwannee.

As the river turns north-northwest near White Springs, Florida, it begins to border the Suwannee Valley and Suwannee County. This continues to form a "C"-shaped curve as it drops southeast, and south again.

Several theories exist about the origin of the name "Suwannee":

The Suwannee River area has been inhabited by humans for thousands of years. During the first millennium CE, it was inhabited by the people of the Weedon Island archaeological culture, and around 900 CE, a derivative local culture, known as the Suwanee River Valley culture, developed.[citation needed]

In the 18th century, Seminoles lived by the river.[citation needed]

The steamboat Madison operated on the river before the Civil War, and the sulphur springs at White Springs became popular as a health resort, with 14 hotels in operation in the late 19th century.[citation needed] 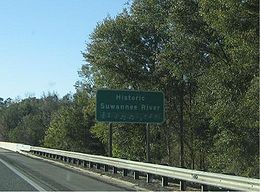 "Historic Suwannee River" sign with the first line of sheet music from "Old Folks at Home", at Interstate 75's crossing of the Suwannee.

This river is the subject of the Stephen Foster song "Old Folks at Home", in which he calls it the Swanee Ribber. Foster had named the Pedee River of South Carolina in his first lyrics. It has been called Swanee River because Foster had used an alternative contemporary spelling of the name.[6] Foster never actually saw the river he made world-famous.[citation needed]

George Gershwin's song, with lyrics by Irving Caesar, and made popular by Al Jolson, is also spelled "Swanee" and boasts that "the folks up North will see me no more when I get to that Swanee shore".[citation needed]

Both of these songs feature banjo-strumming and reminiscences of a plantation life more typical of 19th-century South Carolina than of among the swamps and small farms in the coastal plain of south Georgia and north Florida.[citation needed]

When approaching the Suwannee River via several major highways, motorists are greeted with a sign which announces they are crossing the Historic Suwannee River, complete with the first line of sheet music from "Old Folks at Home". This is Florida's state song, designated as such in 1935.[citation needed]

In 2008, its original lyrics were replaced[7] with a politically correct version.[8] There is a Foster museum and carillon tower at Stephen Foster Folk Culture Center State Park in White Springs. The spring itself is called White Sulphur Springs because of its high sulphur content. Since there was a belief in the healing qualities of its waters, the Springs were long popular as a health resort.[citation needed]

The idiom "up the Swannee" or "down the swanny" means something is going badly wrong, analogous to "up the creek without a paddle".[citation needed]

A unique aspect of the Suwannee River is the Suwannee River Wilderness Trail, a cooperative effort by the Florida Department of Environmental Protection, the Suwannee River Water Management District, and the cities, businesses. and citizens of the eight-county Suwannee River Basin region. The boating route encompasses 170 river miles (274 river kilometers), from Stephen Foster Folk Culture Center State Park to the Gulf of Mexico.[citation needed]

In recent years, the Suwannee River has been the site of many music gatherings. Magnolia Festival, SpringFest, and Wanee have been held annually in Live Oak, Florida, at the Spirit of the Suwannee Music Park, adjacent to the river. Performing artists have included Vassar Clements, Peter Rowan, David Grisman, Allman Brothers Band, and the String Cheese Incident.[citation needed] 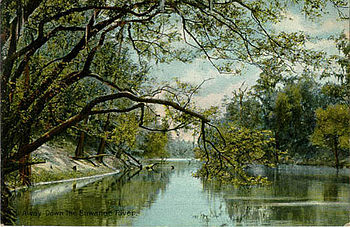 1908 postcard: "Away Down the Suwanee River"