The Suzhou numerals or huama is a numeral system used in China before the introduction of Arabic numerals. 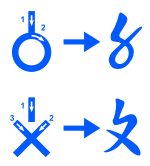 The Suzhou numerals for 5 and 9 come from their respective horizontal forms of the rod numerals.

Suzhou numerals were used as shorthand in number-intensive areas of commerce such as accounting and bookkeeping. At the same time, standard Chinese numerals were used in formal writing, akin to spelling out the numbers in English. Suzhou numerals were once popular in Chinese marketplaces, such as those in Hong Kong along with local transportation before the 1990s, but they have gradually been supplanted by Arabic numerals.[citation needed] This is similar to what had happened in Europe with Roman numerals used in ancient and medieval Europe for mathematics and commerce. Nowadays, the Suzhou numeral system is only used for displaying prices in Chinese markets or on traditional handwritten invoices.[citation needed]

The digits are positional. The full numerical notations are written in two lines to indicate numerical value, order of magnitude, and unit of measurement. Following the rod numeral system, the digits of the Suzhou numerals are always written horizontally from left to right, even when used within vertically written documents.[1] 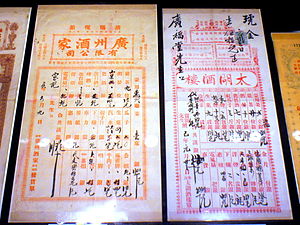 Suzhou numerals on banquet invoices issued by restaurants in the 1910 - 1920s. Although the invoices use traditional right-to-left vertical writing, the Suzhou numerals recording the amounts are written horizontally from left to right.

The first line contains the numerical values, in this example, "〤〇〢二" stands for "4022". The second line consists of Chinese characters that represents the order of magnitude and unit of measurement of the first digit in the numerical representation. In this case "十元" which stands for "ten yuan". When put together, it is then read as "40.22 yuan". 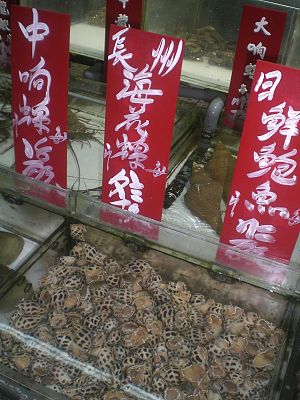 Suzhou numerals on a market in Wan Chai

Other possible characters denoting unit of measurement include:

Notice that the decimal point is implicit when the first digit is set at the ten position. Zero is represented by the character for zero (〇). Leading and trailing zeros are unnecessary in this system.

This is very similar to the modern scientific notation for floating point numbers where the significant digits are represented in the mantissa and the order of magnitude is specified in the exponent. Also, the unit of measurement, with the first digit indicator, is usually aligned to the middle of the "numbers" row.

The Suzhou numerals (Chinese su1zhou1ma3zi) are special numeric forms used by traders to display the prices of goods. The use of "HANGZHOU" in the names is a misnomer.

All references to "Hangzhou" in the Unicode standard have been corrected to "Suzhou" except for the character names themselves, which cannot be changed once assigned, according to the Unicode Stability Policy.[3] (This policy allows software to use the names as unique identifiers.)

In the episode "The Blind Banker" of the 2010 BBC television series Sherlock, Sherlock Holmes erroneously refers to the number system as "Hangzhou" instead of the correct "Suzhou."