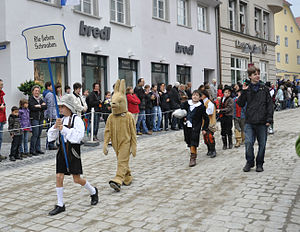 Rutenfest in Ravensburg, Baden-Württemberg, Germany, celebrating the folklore story of "The Seven Swabians" by the Brothers Grimm.

Swabians (Schwaben) are an ethnic German people who are native to or have ancestral roots in the cultural and linguistic region of Swabia, which is now mostly divided between the modern states of Baden-Württemberg and Bavaria, in southwest Germany.[1]

The name is ultimately derived from the medieval Duchy of Swabia, one of the German stem duchies, representing the territory of Alemannia, whose inhabitants were interchangeably called Alemanni or Suebi. This territory would include all of the Alemannic German areal, but the modern concept of Swabia is more restricted, due to the collapse of the duchy of Swabia in the 13th century. Swabia as understood in modern ethnography roughly coincides with the Swabian Circle of the Holy Roman Empire as it stood during the Early Modern period.

Swabian culture, as distinct from its Alemannic neighbours, develops in the later medieval and early modern period. After the disintegration of the Duchy of Swabia, a Swabian cultural identity and sense of cultural unity survived, expressed in the formation of the Swabian League of Cities in the 14th century, the Swabian League of 1488, and the establishment of the Swabian Circle in 1512. During this time, a division of culture and identity developed between Swabia and both the Margraviate of Baden to the west and the Swiss Confederacy to the south.

A public relations campaign by the state of Baden-Württemberg, translated "We can do everything—except speak Standard German." (see article text)

As the national cultural consensus surrounding German unification was built during the 18th and 19th century, Germany was politically dominated by the northern Kingdom of Prussia, and Weimar Classicism became the expression of German national "high culture" (Friedrich Schiller, while born and raised in Swabia, moved to Weimar at age 23 and became one of the main exponents of Weimar Classicism).

As a consequence, southern Germany and by extension both the Swabians and the Bavarians came to be seen as marked deviations from generic Standard German, and a number of clichés or stereotypes developed. These portrayed the Swabians as stingy, overly serious or prudish petty bourgeois simpletons, as reflected in "The Seven Swabians" (Die sieben Schwaben), one of the Kinder- und Hausmärchen published by the Brothers Grimm. On the positive side, the same stereotype may be expressed in portraying the Swabians as frugal, clever, entrepreneurial and hard-working. The economic recovery of Germany after the Second World War, known as the Wirtschaftswunder, was praised by songwriter Ralf Bendix in his 1964 Schaffe, schaffe Häusle baue / Und net nach de Mädle schaue ("[let's] work and work, and build a house / and not look out for girls" in Swabian dialect). The first line of his song has since become a common summary of Swabian stereotypes known throughout Germany. In a widely noted publicity campaign on the occasion of the 50th anniversary of Baden-Württemberg, economically the most successful state in modern Germany, the Swabians famously embraced their stereotyping, "We can do everything—except speak Standard German" (Wir können alles. Außer Hochdeutsch).

Swabian stereotypes persist in contemporary Germany, as expressed e.g. in the "Schwabenhass" conflict (surrounding gentrification in Berlin due to the large number of well-to-do Swabians moving to the capital), or a remark by chancellor Angela Merkel in praise of the "thrifty Swabian housewife" (recommending Swabian, and by extension German economic prudence as a model for Europe during the financial crisis).[2] 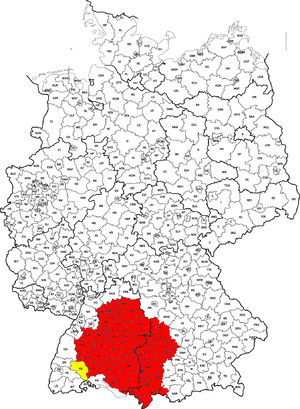 Swabia within modern Germany (shown in yellow is Schwarzwald-Baar-Kreis, situated at the transitional area between the Swabian, Upper Rhenish and Lake Constance dialects within Alemannic)

The ethno-linguistic group of Swabians speak Swabian German, a branch of the Alemannic group of German dialects. Swabian is cited as "40 percent intelligible" to speakers of Standard German.[clarification needed][3] As an ethno-linguistic group, Swabians are closely related to other speakers of Alemannic German, i.e. Badeners, Alsatians, and German-speaking Swiss.[4]

Swabian German is traditionally spoken in the upper Neckar basin (upstream of Heilbronn), along the upper Danube between Tuttlingen and Donauwörth, and on the left bank of the Lech, in an areal centered on the Swabian Alps roughly stretching from Stuttgart to Augsburg. SIL Ethnologue cites an estimate of 819,000 Swabian speakers as of 2006.

During the 18th century East Colonisation, many Swabians were attracted by the Austrian Empire's offer of settling in East European lands which had been left sparsely populated by the wars with Turkey. These ethnic German communities came to be known collectively as the Danube Swabians, subdivided into such groups as the Banat Swabians, Satu Mare Swabians and others (although the name "Danube Swabians" was applied also to German settlers of non-Swabian background).

Swabians settled also in eastern Croatia (Slavonia and Syrmia), and southern and eastern Hungary,[5] including part of what is now Serbia and Romania (the Danube Swabians, Satu Mare Swabians, Banat Swabians and Swabian Turkey) in the 18th century, where they were invited as pioneers to repopulate some areas. They also settled in Russia, Bessarabia, and Kazakhstan. They were well-respected as farmers.

Almost all of the several million Swabians were expelled from Hungary, Romania, and Yugoslavia during the period 1944–1950, as part of the ethnic cleansing against their German minorities. There still are Swabians living near the city of Satu Mare in Romania, who are known as Satu Mare Swabians,[6]

Because of overpopulation and increasingly smaller land-holdings, many Swabians sought land in the Western Hemisphere, especially in the 19th century. Swabian settlements can be found in Brazil, Canada, and the United States. Among the Germans who emigrated to the United States in the 19th century, Swabians in some areas maintained their regional identity and formed organizations for mutual support.[7] The town of Ann Arbor, Michigan, and the farmlands west of town were an important goal for many Swabians. [8] 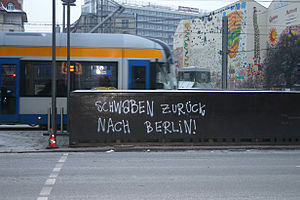 Significant numbers of Swabians moved to Berlin following the city's being re-instated as German capital in 2000.

By the 2010s, their number was estimated as close to 300,000. As the Swabians in Berlin tended to be wealthier than the local Berliner, this resulted in a gentrification conflict, covered under the term Schwabenhass (as it were "Suebophobia") by the German press in 2012–2013.[9]