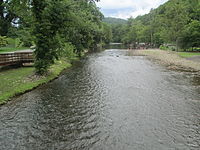 Swain County is a county located in the western portion of the U.S. state of North Carolina. As of the 2010 census, the population was 13,981.[1] Its county seat is Bryson City.[2]

In 2011, the Swain County High School football team captured its eighth state football championship, winning the state 1A championships by a score of 20-14 over the Ayden-Grifton Chargers.[4] The Maroon Devils as a team won three consecutive state championships (1988, 1989, 1990); several noteworthy players were on this team while being led by former University of Tennessee and National Football League quarterback and departing U.S. Representative Heath Shuler (Source: North Carolina High School Athletic Association). The school has also won one state championship in volleyball (2008) and two team state championships in cross country (1999 and 2000).

The highest point in the county is Clingmans Dome, elevation 6,643 feet, located on the NC/TN border. This mountain is the third highest peak in North Carolina, and an observation tower is located on its summit.

Swain County is a member of the regional Southwestern Commission council of governments.

The town of Cherokee is on the Qualla Boundary, a tribal reservation for the Eastern Band of Cherokee Indians. It has no town government and is subject mostly to tribal/federal laws, rather than those of the county or state.

Swain County has one railroad, the Great Smoky Mountains Railroad, which has its headquarters in Bryson City. 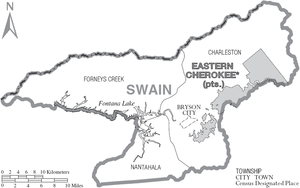