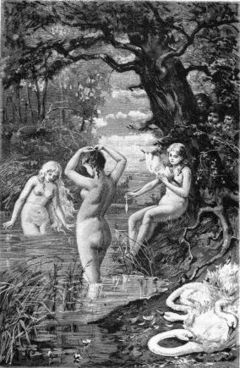 In the Völundarkviða, Wayland Smith and his brothers marry valkyries who dress in swan skins.

The Swan Maiden is a mythical creature who shapeshifts from human form to swan form.[1][2] Despite the name, males are found in a small number of legends. The key to the transformation is usually a swan skin, or a garment with swan feathers attached.

In folktales of this type, the hero spies the maiden typically by some body of water (usually bathing), then snatches away the feather garment (or some other article of clothing), which prevents her from flying away (or swimming away, or renders her helpless in some other manner), forcing her to become his wife.[3]

There are parallels around the world, notably the Völundarkviða[4] and Grimms' Fairy Tales KHM 193 "The Drummer".[5] The parallels do not necessarily feature a swan per se, she may be a selkie or mermaid.

Established folkloristics does not formally recognize "Swan Maidens" as a single AT tale type. Rather, one must speak of tales that exhibit Stith Thompson motif index "D361.1 Swan Maiden",[6] which may be classed AT 400, 313, or 465A.[5] Compounded by the fact that these the tale types have "no fewer than ten other motifs" assigned to them, the AT system becomes a cumbersome tool for keeping track of parallels for this motif.[7] Seeking an alternate scheme, one investigator has developed a system of five Swan Maiden paradigms, four of them groupable as a Grimm tale cognate (KHM 193, 92, 93, and 113) and the remainder classed as the "AT 400" paradigm.[7] Thus for a comprehensive list of the most starkly-resembling cognates of Swan Maiden tales, one need only consult Bolte and Polívka's Anmerkungen to Grimm's Tale KHM 193[8] the most important paradigm of the group.[9]

The folktales usually adhere to the following basic plot. A young, unmarried man steals a magic robe made of swan feathers from a swan maiden so that she will not fly away, and marries her. Usually she bears his children. When the children are older they sing a song about where their father has hidden their mother's robe, or one asks why the mother always weeps, and finds the cloak for her, or they otherwise betray the secret. The swan maiden immediately gets her robe and disappears to where she came from. Although the children may grieve her, she does not take them with her.

If the husband is able to find her again, it is an arduous quest, and often the impossibility is clear enough so that he does not even try.

AT 402 ("The Animal Bride") group of folktales are found across the world, though the animals vary. The Italian fairy tale "The Dove Girl" features a dove. There are the Orcadian and Shetlandic selkies, that alternate between seal and human shape. A Croatian tale features a she-wolf. In Africa, the same motif is shown through buffalo maidens. In East Asia, it is also known featuring maidens who transform into various bird species. In Russian fairy-tales there are also several characters, connected with the Swan-maiden. In the Japanese legend of Hagoromo, it is a heavenly spirit, or Tennin, whose robe is stolen.

Another related tale is the Chinese myth of the Cowherd and Weaver Girl, in which one of seven fairy sisters is taken as a wife by a cowherd who hid the seven sisters' robes; she becomes his wife because he sees her naked, and not so much due to his taking her robe.

One notably similar Japanese story, "The crane wife", is about a man who marries a woman who is in fact a crane (Tsuru no Ongaeshi) disguised as a human. To make money the crane-woman plucks her own feathers to weave silk brocade which the man sells, but she become increasingly ill as she does so. When the man discovers his wife's true identity and the nature of her illness, she leaves him. There are also a number of Japanese stories about men who married kitsune, or fox spirits in human form (as women in these cases), though in these tales the wife's true identity is a secret even from her husband. She stays willingly until her husband discovers the truth, at which point she abandons him.

According to Julien d'Huy, such a motif would also have existed in European prehistory and would have a buffalo maiden as a heroine. Indeed, this author finds the motif with four-legged animals in North America and Europe, in an area coinciding with the area of haplogroup X.[10]

The swan maiden has appeared in numerous items of fiction, including the ballet Swan Lake, in which a young princess, Odette and her maidens are under the spell of an evil sorcerer, Von Rothbart, transforming them into swans by day. By night, they regain their human forms and can only be rescued if a young man swears eternal love and faithfulness to the Princess. When Prince Siegfried swears his love for Odette, the spell can be broken, but Siegfried is tricked into declaring his love for Von Rothbart's daughter, Odile, disguised by magic as Odette, and all seems lost. But the spell is finally broken when Siegfried and Odette drown themselves in a lake of tears, uniting them in death for all eternity. While the ballet's revival of 1895 depicted the swan-maidens as mortal women cursed to turn into swans, the original libretto of 1877 depicted them as true swan-maidens: fairies who could transform into swans at will.[11] Several animated movies based on the ballet, including The Swan Princess and Barbie of Swan Lake depict the lead heroines as being under a spell and both are eventually rescued by their Princes.

Pop culture appearances include modern novels of the fantasy genre such as Three Hearts and Three Lions and television such as Astroboy Episode 5. And recently, swan-men in the Anita Blake series, including Kaspar Gunderson. They are also called swan mays or swanmays in fantasy fiction and Dungeons and Dragons. In the Mercedes Lackey book, Fortune's Fool, one swan maiden (named Yulya) from a flock of six is kidnapped by a Jinn. Elven princess Earwen in The Silmarillion by J.R.R. Tolkien was referred to as the "swan maiden of Alqualonde".