From Infogalactic: the planetary knowledge core
Jump to: navigation, search
For the benign condition characterized by abnormally increased perspiration, see Hyperhidrosis. For the tick-borne disease of cattle in Africa, see Sweating sickness (cattle).

Sweating sickness, also known as "English sweating sickness" or "English sweate" (Latin: sudor anglicus), was a mysterious and highly contagious disease that struck England, and later continental Europe, in a series of epidemics beginning in 1485. The last outbreak occurred in 1551, after which the disease apparently vanished. The onset of symptoms was dramatic and sudden, with death often occurring within hours. Though its cause remains unknown, it has been suggested that an as yet unknown species of hantavirus was responsible for the outbreak.[1]

The disease tended to occur in summer and early autumn. The symptoms and signs as described by physician John Caius and others were as follows: The disease began very suddenly with a sense of apprehension, followed by cold shivers (sometimes very violent), giddiness, headache and severe pains in the neck, shoulders and limbs, with great exhaustion. After the cold stage, which might last from half an hour to three hours, the hot and sweating stage followed. The characteristic sweat broke out suddenly without any obvious cause. Accompanying the sweat, or after was a sense of heat, headache, delirium, rapid pulse, and intense thirst. Palpitation and pain in the heart were frequent symptoms. No skin eruptions were noted by observers including Caius. In the final stages, there was either general exhaustion and collapse, or an irresistible urge to sleep, which Caius thought to be fatal if the patient was permitted to give way to it. One attack did not offer immunity, and some people suffered several bouts before dying.[1]

The cause is the most mysterious aspect of the disease. Commentators then and now put much blame on the generally poor sanitation, sewage and contaminated water supplies of the time, which might have harboured the source of infection. The first outbreak at the end of the Wars of the Roses means that it may have been brought over from France by the French mercenaries whom Henry VII used to gain the English throne. However, the Croyland Chronicle mentions that Thomas Stanley, 1st Earl of Derby used the "sweating sickness" as an excuse not to join with Richard III's army prior to the Battle of Bosworth.[1]

Relapsing fever has been proposed as a possible cause. This disease, which is spread by ticks and lice, occurs most often during the summer months, as did the original sweating sickness. However, relapsing fever is marked by a prominent black scab at the site of the tick bite and a subsequent skin rash.

Noting symptom overlap with hantavirus pulmonary syndrome, several scientists proposed an unknown hantavirus as the cause.[1][2][3] A critique of this hypothesis included the argument that, whereas sweating sickness was thought to be transmitted from human to human, hantaviruses are not known to spread in this way.[4] However, infection via human-to-human contact has been proven in hantavirus outbreaks in Argentina.[5] 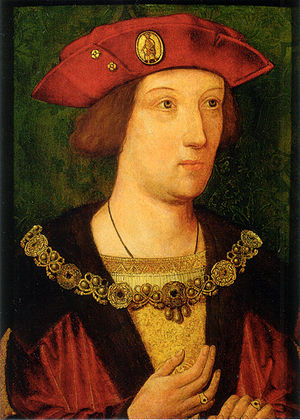 Sweating sickness first came to the attention of physicians at the beginning of the reign of Henry VII. There is no known definitive statement that the sickness was present in troops landing at Milford Haven. Soon after the Battle of Bosworth, Henry arrived in London on 28 August, where the disease first broke out on 19 September 1485.[6] There, it killed several thousand people by its conclusion in late October that year.[7] Among those killed were two lord mayors, six aldermen, and three sheriffs.[8] This alarming malady soon became known as the sweating sickness. It was regarded as being quite distinct from the plague, the pestilential fever or other epidemics previously known, not only by the special symptom that gave it its name, but also by its extremely rapid and fatal course. The sweating sickness reached Ireland in 1492, when the Annals of Ulster record the death of James Fleming, Baron of Slane from the pláigh allais, newly come to Ireland.[9] The Annals of Connacht also record this obituary,[10] and the Annals of the Four Masters record "an unusual plague in Meath…" of 24 hours' duration;[11] and any one who survived it beyond that period recovered. It did not attack infants or little children. However, Freeman in his footnote to the Annals of Connacht denies that this "plague" was the sweating sickness, despite the similarity of the names. He thought it to be "Relapsing or Famine Fever"—possibly typhus.

File:Euricius cordus - englisch schweiss.jpg
Title of a publication in Marburg, 1529, about the English Sweating sickness

From 1492 to 1502, nothing was recorded of the ailment. It may have been the condition that afflicted the young Arthur, Prince of Wales (the elder brother of Henry VIII of England) and his wife, Catherine of Aragon, in March 1502; their illness was described as "a malign vapour which proceeded from the air".[12][13] Other possibilities that have been suggested include tuberculosis ("consumption"),[14] plague,[15] and influenza.[16] In 2002, Arthur's tomb was opened, but experts could not determine the exact cause of death; a genetic ailment which also affected Arthur's nephew, Edward VI, was mentioned as a possible cause being investigated.[17] While Catherine recovered, Arthur died on 2 April 1502 in his home at Ludlow Castle, six months short of his sixteenth birthday.[18]

In 1507, a second, less widespread outbreak occurred, followed in 1517 by a third and much more severe epidemic, when it also spread to Calais.[6] In Oxford and Cambridge it was frequently fatal, as well as in other towns, where in some cases half the population are said to have perished.

In 1528, the disease reached epidemic proportions for the fourth time and with great severity. It first broke out in London at the end of May and speedily spread over the whole of England, save for the far north, not spreading to Scotland, though it did reach Ireland, where the Lord Chancellor, Hugh Inge, was the most prominent victim.[19] In London the mortality was very great; the court was broken up, and Henry VIII left London, frequently changing his residence. It suddenly appeared in Hamburg, spreading so rapidly that in a few weeks, more than a thousand people died. The sickness swept through eastern Europe as an epidemic causing high mortality rates. It arrived in Switzerland in December, then was carried northwards to Denmark, Sweden and Norway, and eastwards to Lithuania, Poland and Russia. Cases of the disease were not known to occur in what is now France (except in the Pale of Calais, which was controlled by England at the time ) or Italy. It also emerged in Flanders and the Netherlands,[6] probably transmitted directly from England by travellers, as it appeared simultaneously in the cities of Antwerp and Amsterdam on the morning of 27 September. In each place it infected, it prevailed for a short time, generally not more than a fortnight. By the end of the year, it had entirely disappeared, except in eastern Switzerland, where it lingered into the next year. After this, the disease did not recur on mainland Europe.

The last major outbreak of the disease occurred in England in 1551.[20] An eminent physician, John Caius, wrote an eyewitness account of the disease at this time called A Boke or Counseill Against the Disease Commonly Called the Sweate, or Sweatyng Sicknesse.

The malady was never seen again in England after 1578.

A similar illness, known as the Picardy sweat, occurred in France between 1718 and 1918.[21] Llywelyn Roberts noted "a great similarity between the two diseases."[6] It was accompanied by a rash, which was not described as a feature of the earlier outbreaks. However, Henry Tidy argued that John Caius' report applies to fulminant cases fatal within a few hours, in which type no eruption may develop. A 1906 outbreak of Picardy Sweat that struck 6,000 people was studied by a commission led by bacteriologist André Chantemesse and attributed infection to the fleas of field mice. Henry Tidy found "no substantial reason to doubt the identity of sudor anglicus and Picardy sweat."[1][22]

The 1528 outbreak is depicted in the 2007 episode of The Tudors titled "Message to the Emperor". William Compton is killed by the disease and both Anne Boleyn and Cardinal Wolsey are stricken. In Season 1, Episode 5, Henry FitzRoy, 1st Duke of Richmond and Somerset, the king's officially recognized, illegitimate son dies of "The Sweat" at about 3–5 years old. The real Henry FitzRoy died about one month after his seventeenth birthday, probably of tuberculosis. In Season 1, Episode 7, a physician tries to treat a mortally afflicted Sir William Compton by puncturing his back and bleeding him, on the rumor that it has worked for some by releasing "the toxin." The real William Compton indeed died of sweating sickness, at age 46.

A small outbreak in 1527 kills Liz, the wife of Thomas Cromwell, Cardinal Wolsey's advisor, in Hilary Mantel's Wolf Hall. In 1529, the disease also claims the lives of Cromwell's daughters Grace and Anne. In the first episode of the 2015 television adaptation of the novel, Wolf Hall, which was originally broadcast on BBC Two, all three die on the same day.[23]

Sweating sickness is also featured in the British television series Merlin. The illness historically did not appear until many centuries after any of the supposed dates for King Arthur's reign, and none of the legends surrounding him discuss plague outbreaks.

Philippa Gregory's 2014 historical novel The King's Curse features the sweating sickness; although her depiction seems to indicate that Catherine of Aragon was kept away from Prince Arthur so she would not catch it.