From Infogalactic: the planetary knowledge core
Jump to: navigation, search
This article is about the historical kingdom. For modern bilateral relations, see Finland–Sweden relations. 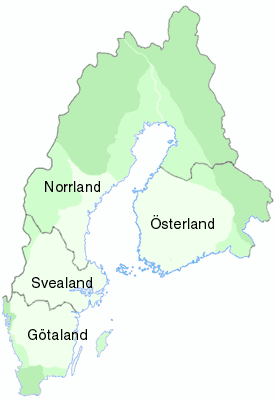 The traditional lands of Sweden. (Different stages of expansion marked by shades. Borders as of year 1700.)

Sweden–Finland is a debated Finnish historiographical term referring to the Swedish Kingdom from the Kalmar Union to the Napoleonic wars, or the period from the 14th to the early 19th century.[1][2] In 1809 the realm was split and the eastern half came to constitute the autonomous Grand Duchy of Finland, in personal union with Imperial Russia. The term was coined by Finnish historians during the 1920s, but since then there has been an effort to drop it from professional historiography due to its inaccuracy.[3] However, it is often still used in everyday Finnish speech and taught in schools.

Although the term has didactic merits, for instance when used in conjunction with the term Denmark-Norway, it is misleading because from the Middle Ages up to 1809 what now is Finland was an integrated part of the Swedish kingdom, whereas Denmark and Norway were two sovereign kingdoms which were united in 1380. Finland until 1809 was considered as one of four Swedish lands. However, it was different from Götaland and Svealand, but not Norrland, in that Swedish was not the majority language in this part of the kingdom, except for some areas along the coastline and amongst the nobility and the urban upper classes.[citation needed] During the time of the Swedish Empire Sweden–Finland was identical to Sweden proper; other overseas possessions constituted the dominions of Sweden. However, a conceptual distinction was sometimes made between Sweden and Finland already during Swedish rule: for example, in certain 16th century documents, Gustav Vasa occasionally uses the phrases the cities of Sweden and Finland and the cities of Finland and the cities of Sweden, thus implying that the two entities are not identical. In this context "Finland" however usually referred to the provinces of Finland Proper and Satakunta, not to Tavastia or Karelia.[3]