The Swedish Air Force (Swedish: Flygvapnet) is the air force branch of the Swedish Armed Forces.

The Swedish Air Force was created on July 1, 1926 when the aircraft units of the Army and Navy were merged. Because of the escalating international tension during the 1930s the Air Force was reorganized and expanded from four to seven squadrons. When World War II broke out in 1939 further expansion was initiated and this substantial expansion was not finished until the end of the war. Although Sweden never entered the war, a large air force was considered necessary to ward off the threat of invasion and to resist pressure through military threats from the great powers. By 1945 the Swedish Air Force had over 800 combat-ready aircraft, including 15 fighter divisions.

A major problem for the Swedish Air Force during World War II was the lack of fuel. Sweden was surrounded by countries at war and could not rely on imported oil. Instead domestic oil shales were heated to produce the needed petrol.

Expansion during the Cold War 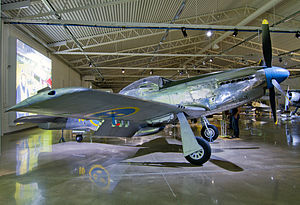 The Swedish Air Force underwent a rapid modernization from 1945. It was no longer politically acceptable to equip it with second-rate models. Instead, the Air Staff purchased the best it could find from abroad, e.g. P-51D Mustangs, De Havilland Mosquito NF.19 night fighters and de Havilland Vampires, and supported the development of top performance domestic models. When the Saab 29 Tunnan fighter was introduced around 1950, Sweden suddenly had planes that were equal to the best of the Royal Air Force, the Soviet Union's VVS, and the U.S. Air Force.

During the 1950s the air force started to build road bases after an idea taken from Germany. Built under the BASE 60 distributed airfield scheme,[2] the bases were ordinary highways constructed in such a way that they could also serve as landing strips. In the early eighties road number 44 was rebuilt to contain four short runways (17 x 800 metres). Along the road a large number of turn-around-sites for rearming and refueling were built. These short runways are still used today for training, landing and taking off with Gripen and Hercules as preparation for international operations under adverse conditions.[3]

During the Cold War large amounts of money (including all that had been reserved for Swedish nuclear weapons) were spent on the Swedish Air Force and domestic airplane production. In 1957 Sweden had the world's fourth most powerful air force, [4] with about 1000 modern planes in front-line service.[5] During the 1950s, it introduced fighters such as the Saab J 29 Tunnan, Saab A 32 Lansen and Saab J 35 Draken.

In June 1952 the Swedish Air Force lost two aircraft on Cold War operations, in what became known as the Catalina affair. A signals intelligence Douglas DC-3 was intercepted by Soviet MiG-15s over the Baltic, and shot down with the loss of three aircrew and five civilian technicians. A PBY Catalina rescue seaplane was then also downed, the five-man crew being rescued from the sea by a freighter.

The Swedish Air Force has seen involvement at some level in three wars, the Finno-Soviet Winter War in 1939–40, in which volunteers took part, the Congo Crisis, 1961–64, and in the 2011 Libyan civil war.

When the Soviet Union attacked Finland in November 1939, Sweden came to its neighbour's assistance in most ways short of joining the war outright. A Swedish volunteer infantry brigade and a volunteer air squadron fought in northern Finland in January till March 1940. The squadron was designated F 19 and consisted of 12 Gloster Gladiator fighters and four Hawker Hart dive-bombers.

The Swedish Air Force saw combat as part of the United Nations peace-keeping mission ONUC during the Congo Crisis in 1961 to 1964. It established a separate air wing, F 22, equipped with a dozen semi-obsolete Saab 29 Tunnans, which performed well under the rugged conditions in central Africa. The secessionist adversaries possessed only a small number of aircraft with poor combat capabilities, e.g. Fouga Magister trainers.

The end of the Cold War saw the Swedish Armed Forces undergo a massive restructuring process. During that time, several air bases were deemed unnecessary and closed. In 1994 the air force had over 400 fighters, by 2005 the number had sunk to fewer than 150.

On March 29, 2011, the Swedish prime minister announced that eight Saab JAS 39 Gripens would be deployed to support the UN-mandated no-fly zone over Libya.[6] The announcement was made in response to a request by NATO for assistance. The Swedish fighters were limited to supporting the no-fly zone and were not authorized to engage in ground attack sorties. The deployment was approved by the Swedish Riksdag on April 1, 2011 and the first jets departed for Libya on April 2. Accompanying the fighters was a C-130 Hercules for mid-air refueling.[7]

The Swedish Air Force is today being adapted to new future tasks. With the collapse of the only military threat, the Soviet Union and the end of the Cold War, budget cuts have been made in the Swedish armed forces. The Swedish government decided to cut back on the Air Force and its fighters. Today about 80 Gripen C/D fighters remains in service. Some orders have been made on the helicopter side and about 40 new units will join the air force in the next coming years. Saab AB has also joined the primarily French project for the unmanned future stealth plane Dassault nEUROn.

In 2008 as well as in 2010, the Swedish armed forces wanted to retire even more fighters and close air-bases to relocate money to other branches. However, because of negative response from the public and pressure from the Swedish government, no cuts have so far been made.[8][9][10][11]

In 2013, the USMC introduced Swedish helicopter units to the forward air control airborne mission for better air-ground coordination.[13] In the same year, a further 60 Gripens from the modified E class was orders with the first plane to join the airforce in 2018.[14] In April 2014, the Swedish government proposed another 10 fighters making the total order of 70 planes.[15] 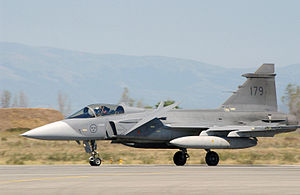 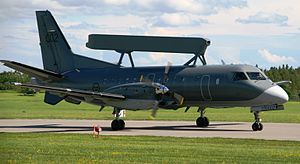 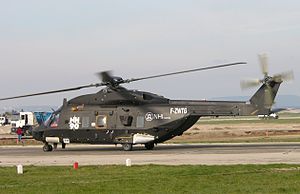 There are three wings of fighters: 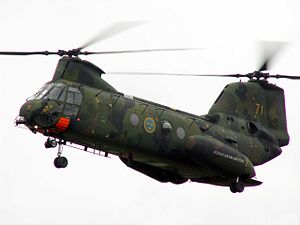 A Swedish Hkp 4 during the "Swedish Battle Camp 2006" event

The aviation units that were formerly under the Swedish Army ("Arméflyget") and the Swedish Navy ("Marinflyget") have been merged with the helicopter units of the Air Force to form the single Helicopter Wing (Helikopterflottiljen, abbreviated Hkpflj) for the entire Armed Forces. The wing has been placed under the authority of the Air Force and consists of:

Sweden originally ordered 204 Gripen aircraft.[31] Out of these 80 remain in service in the Air Force today and an additional 28 are leased to the Czech and Hungarian Air Force (14 each), with an option to acquire them when the lease period expires. Furthermore, 12 aircraft were sold to the Royal Thai Air Force.[32] 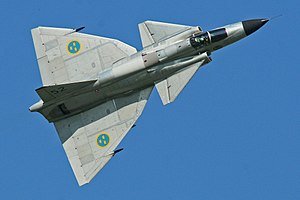 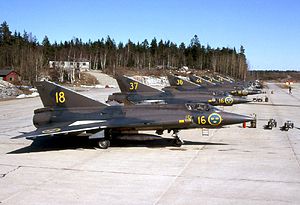 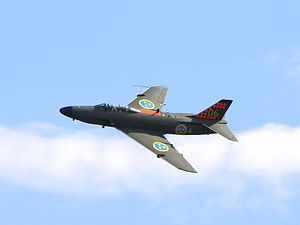 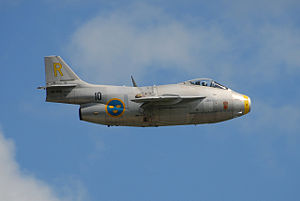