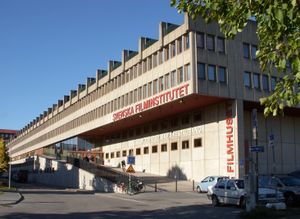 Filmhuset in Stockholm, the seat of the Swedish Film Institute

The Swedish Film Institute (Swedish: Svenska Filminstitutet) was founded in 1963 to support and develop the Swedish film industry. The institute is housed in the Filmhuset building located in Gärdet, Östermalm in Stockholm. The building, completed in 1970, was designed by architect Peter Celsing.

Through the Swedish Film Agreement, between the Swedish state and the film and media industry, the Government of Sweden, the TV companies which were party to the agreement, and Sweden's cinema owners jointly fund the Film Institute and thus, indirectly, Swedish filmmaking. The agreement ran from January 1, 2006, until December 31, 2012. The building also contains a large film archive and two theatres, named after Victor Sjöström and Mauritz Stiller, which regularly arrange screenings of classic films.

Chairmen of the Board