The Swedish People's Party of Finland (Swedish: Svenska folkpartiet i Finland (SFP); Finnish: Suomen ruotsalainen kansanpuolue (RKP)) is a liberal-centrist[5] political party in Finland aiming to represent the interests of the minority Swedish-speaking population of Finland.[6][7][8] The party's main election issue has been since its inception the Swedish-speaking Finns' right to their own language and to maintain the Swedish language's position in Finland. The party was in governmental position 1979–2015 with one or two seats in the government and collaborated with the centre-right as well as the centre-left in the Parliament of Finland. After the 2015 election SFP was left out of the government formed by the three biggest parties.[9]

The fact that both the Finnish centre-right and centre-left have needed the support from the party has meant that they have been able to affect politics of Finland in a larger scale than the party's actual size would suggest. The position of the Swedish language as one of two official languages in Finland and the Swedish-speaking minority's right to the Swedish culture are two of the results of the party's influence in Finnish politics. The party is a member of Liberal International and the Alliance of Liberals and Democrats for Europe (ALDE) Party. 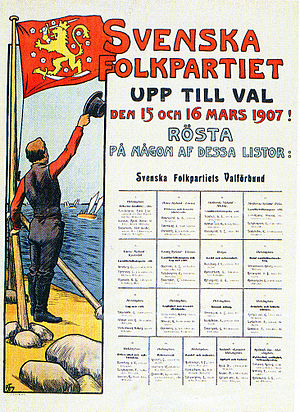 Swedish People’s Party election poster that was used from 1907 to 1966. Designed by Alex Federley.

The Swedish Party (1870–1906), a parliamentary elite party based on members in the Diet of Finland, is the historical predecessor of the Swedish People's Party of Finland. It was a part of the Svecoman movement and its main policy was opposition of the Fennoman movement.

Unlike Fennomans who were largely liberal on other matters than the language question, the Svecoman were conservative. Axel Lille and Axel Olof Freudenthal are often considered as some of the main "founding fathers" of the movement. Most members of the Liberal Party joined the Swedish Party in the 1880s, after the Liberals ceased to exist as a distinct party. The Swedish People's Party of Finland was founded in the 1906 party congress of the Swedish Party, making it one of the oldest parties in Finland. The first leader of Swedish People's Party was Axel Lille.

The current leader of the party is Carl Haglund. In the Parliament of Finland the representative for Åland is usually included in SFP's parliamentary group, regardless of his/her party affiliation. This is because the political parties in Åland have no counterparts in Mainland Finland, but the SFP's interests have much in common with those of Åland as far as the Swedish language is concerned.

The party receives its main electoral support from the Swedish speaking minority, which makes up about 5.5% of Finland's population.[10] During its history, the party has suffered slow but steady decline in adherence, following the decline of the percentage of Swedish-speaking population: in 1907 it got 12% of national votes, after World War II 7% and in the 2011 parliamentary election 4.3% (9 MPs). In municipal elections, it holds large majorities in municipalities with a Swedish-speaking majority.

Despite its position as one of the minor political parties in the Finnish parliament it has frequently been one of the partners forming the governing coalition cabinets. Since 1956, the year when Urho Kekkonen was elected President, the party has been nearly continuously in the government. It has been part of all coalitions with the significant exception of Paasio's first government (1966–68), which included only socialists (Social Democratic Party (SDP), the split SDP faction Social Democratic Union of Workers and Smallholders and Finnish People's Democratic League) and the Centre Party.

Short periods of rule by single-party minority governments, Miettunen government (1961–62, Centre) and Paasio's second government (1972, SDP) and of nonpartisan caretaker governments have also interrupted its stay in the government. For this reason, SFP is often criticized for being a single-issue party that allegedly accepts nearly all other policies as long as its own vital interest, the status of the Swedish language is maintained.

However, although Vanhanen's first government made Swedish a voluntary subject in the upper secondary school's matriculation exam, SFP remained in the government. In contrast, the Greens left the previous government after a new nuclear power plant was decided in 2002.

Recently the SFP has emphasized the liberal part of its programme, attempting to woo voters outside its traditional Swedish-speaking electorate. In 2010, the party added the word Suomen ("of Finland") to its official Finnish name.

The Swedish People's Party of Finland has the most eclectic profile of any of the political parties in Finland, its members and supporters including (chiefly):

Although the SFP represents a small minority of Finland, Swedish mother tongue per se is not much of a political handicap. Several times Swedish speaking presidential candidates have gathered considerable support, although not necessarily as candidates for the Swedish People's Party of Finland: 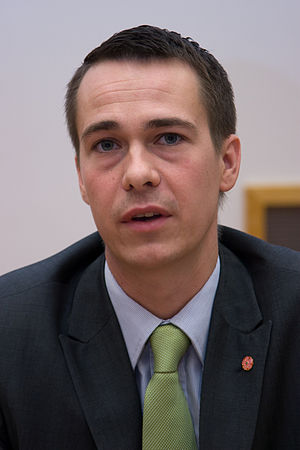