The krona (plural: kronor; sign: kr; code: SEK) has been the currency of Sweden since 1873. Both the ISO code "SEK" and currency sign "kr" are in common use; the former precedes or follows the value, the latter usually follows it but, especially in the past, it sometimes preceded the value. In English, the currency is sometimes referred to as the Swedish crown, as krona literally means crown in Swedish. The Swedish krona was the 11th most traded currency in the world by value in April 2013.[3]

One krona is subdivided into 100 öre (singular and plural; when referring to the currency unit itself, however, the plural definite form is ören). However, all öre coins have been discontinued as of 30 September 2010.[4] Goods can still be priced in öre, but all sums are rounded to the nearest krona when paying with cash.

The introduction of the krona, which replaced at par the riksdaler, was a result of the Scandinavian Monetary Union, which came into effect in 1873 and lasted until World War I. The parties to the union were the Scandinavian countries, where the name was krona in Sweden and krone in Denmark and Norway, which in English literally means "crown". The three currencies were on the gold standard, with the krona/krone defined as ​1⁄2480 of a kilogram of pure gold.

After dissolution of the monetary union, Sweden, Denmark, and Norway all decided to keep the names of their respective and now separate currencies. 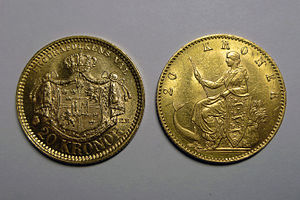 Two golden 20 kr coins from the Scandinavian Monetary Union, which was based on a gold standard. The coin to the left is Swedish and the right one is Danish.

In 1968, the 2 kronor switched to cupronickel and the 1 krona switched to cupronickel-clad copper (it was replaced entirely by cupronickel in 1982). Nonetheless, all previous mintages of 1 and 2 kronor coins are still legal tender, since 1875 and 1876 respectively (though 2 kronor coins are extremely rarely seen in circulation as they have not been issued since 1971.[8] The 2 kr coins contained 40% silver until 1966, which meant they had been for several years worth much more than 2 kr, so most have been bought and melted down by arbitrageurs, and the rest are kept by collectors). A new design of 2 kronor coins will be issued in 2016.

In 1954, 1955 and 1971, 5 kronor silver coins were produced, with designs similar to contemporary 1 krona and 2 kronor coins. In 1972, a new, smaller 5 kronor coin was introduced, struck in cupronickel-clad nickel. The current design has been produced since 1976. 5 kronor coins minted since 1954 are legal tender but tend to be kept by collectors for their silver content.

Jubilee and commemorative coins have been minted and those since 1897 or later are also legal tender.[10]

The royal motto of the monarch is also inscribed on many of the coins. The 5 kronor coin was designed in 1974, at a time when there were political efforts to abandon the monarchy, when there was a new young inexperienced king. The monarchy remained, but the 5 kronor was not given a portrait. Coins minted before 1974 have the same size, but contain the portrait of King Gustav VI Adolf and his royal motto.

On 18 December, 2008, the Riksbank announced a proposal to phase out the 50 öre, the final öre coin, by 2010. The öre would still remain a subdivision unit for electronic payments.[11] The reason could include low purchasing power, higher production and distribution cost than the value and the coins cannot be used in most parking machines and vending machines.[12] On March 25, 2009, the Riksdag formally decided to enact the law to repeal 50 öre coins as legal tender. Under that law, the final date payments could be made with 50 öre coins was September 30, 2010. Remaining 50 öre coins could be exchanged at banks until the end of March 2011.

On 11 September 2012, the Riksbank announced a new series of coins to replace the 1 and 5 kronor coins which will be arriving in October 2016.[13][14] Under the theme of the singer-songwriter Ted Gärdestad's song, "Sol, vind och vatten" (English: "Sun, wind and water") [15] with the designs depicting the elements on the reverse side of the coins. This would also include the reintroduction of the 2 kronor coin, while the current 10 kronor coin would remain the same. The new coins would also have a new portrait of the king in the design. One of the reasons for a new series of coins is to end the use of nickel.

In 2006, the Riksbank introduced a new 1000 kronor note[16] which is the first bill to contain the "Motion" security feature developed by Crane, then called Tumba Bruk. Crane AB, located in Tumba, Sweden, prints all of the kronor banknotes.

Banknotes from this series will be withdrawn by 2017.

On 6 April 2011, the Riksbank announced the names of the persons whose portraits would decorate the new series of banknotes that would be introduced in 2015. This would also include a new 200 kronor banknote. These are:

On 24 April 2012, the Riksbank announced the base for the new designs of the banknotes, based on Göran Österlund's entry titled Cultural Journey.[18][19]

Opera singer Malena Ernman has criticized the Riksbank for choosing a design where Birgit Nilsson has been depicted performing Die Walküre by Richard Wagner. She pointed out that it was very inappropriate to include something by Wagner, whose works were closely associated with Nazi Germany, in a time of increasing problems with antisemitism in Sweden. The Riksbank replied saying that it's "unfortunate that the choice of design is seen as negative", and stated that it's not going to be changed.[21]

Dagens Nyheter journalist Björn Wiman went further in his criticism, condemning the Riksbank for selecting Nilsson at all for the 500 kr banknote. He brings up an example from Nilsson's 1995 autobiography, where she described Mauritz Rosengarten from Decca using antisemitic jokes about greed.[22]

Historic exchange rate against the Euro

The exchange rate of the Swedish krona against other currencies has historically been dependent on the monetary policy pursued by Sweden at the time. Since November 1992, a managed float regimen has been upheld.[26] The exchange rate has been relatively stable against the euro since its introduction 2002 (about 9–9.5 SEK per EUR), but from the second half 2008, the value of the krona has declined by around 20%, and had been oscillating between 10.4–11 SEK per EUR into the first half of 2009.[citation needed] The primary reason for its declining value lies with the Riksbank, which has significantly lowered the interest rate, and has not acted to defend the exchange rate yet.[citation needed] In the second half of 2009 and the start of 2010, the krona started to appreciate; during late 2010 and early 2011 it continued to appreciate at a quicker rate. The exchange rate is currently between 8.5 and 9.0 SEK per EUR. In July 2012, due to crisis in Greece and fear of further spreading to Italy and Spain, the euro continued to decline making the Swedish krona stronger, reaching as low as 8.17 SEK per EUR.

Main article: Sweden and the euro

According to the 1995 accession treaty, Sweden is required to join the eurozone and therefore must convert to the euro at some point. Notwithstanding this, on 14 September 2003, a consultative Swedish referendum was held on the euro, in which 56% of voters were opposed to the adoption of the currency, out of an overall turnout of 82.6%.[27] The Swedish government has argued such a course of action is possible since one of the requirements for eurozone membership is a prior two-year membership of the ERM II. By simply choosing to stay outside the exchange rate mechanism, the Swedish government is provided a formal loophole avoiding the theoretical requirement of adopting the euro.

Some[who?] (like the Liberals) of Sweden's major parties continue to believe it would be in the national interest to join, but all parties have pledged to abide by the results of the referendum,[needs update] and none have shown any interest in raising the issue again. There was an agreement among the parties not to discuss the issue before the 2010 general election. In a poll from May 2007, 33.3% were in favor, while 53.8% were against and 13.0% were uncertain.[28]

In February 2009, Fredrik Reinfeldt, the Prime Minister of Sweden stated that a new referendum on the euro issue will not be held until support is gained from the people and all the major parties. Therefore, the timing is now at the discretion of the Social Democrats. He added, the request of Mona Sahlin, former leader of the Social Democratic Party, for deferral of a new referendum until after the 2010 mandate period should be respected.[29]

As of 2014[update], support for Swedish membership of the euro among the general population is low. In September 2013, support fell as low as 9%.[30] The only party in the Riksdag that supports Swedish entry in the euro (as of 2015) is the centrist Liberal Party.[31]