It is approximately 220 yards (200 m) from the central bus station and the town centre. It is served by GWR services from London Paddington to Bristol Temple Meads, Cardiff Central, Cheltenham Spa via Gloucester, Swansea and the rest of South Wales. There is also an early morning service to Southampton which originates at Gloucester reversing at Swindon.

See also: History of Swindon, Swindon Works, and Great Western Railway
File:Swindon railway station long shot.JPG
The National Rail logo above the station can be seen from a distance and helps travellers locate it

With the railway passing through the town in early 1841, the Goddard Arms public house in Old Swindon was used as a railway booking office in lieu of a station. Tickets purchased included the fare for a horse-drawn carriage to the line at the bottom of the hill.[1]

Swindon railway station opened in 1842 with construction of the Great Western Railway's engineering works continuing. Until 1895, every train stopped here for at least 10 minutes to change locomotives. Swindon station hosted the first recorded railway refreshment rooms, divided according to class. Swindonians, for a time, were eminently proud that even the current King and Queen of the time had partaken of refreshments there.[1] The station in 1842 was built of three storeys, with the refreshment rooms on the ground floor, the upper floors comprising the station hotel and lounge. Until 1961, when Swindon Town station closed, the station was known as Swindon Junction.

The building was demolished in 1972, with today's modern station and office block erected on the site.[1]

The Travel Centre (i.e. booking office) at Swindon was APTIS-equipped by the end of October 1986, making it one of the very first stations with the ticketing system which was eventually found across the UK at all staffed British Rail stations by the end of the 1980s.[citation needed]

On 2 June 2003 Platform 4 opened.[2] Prior to this all westbound trains had used Platform 3 and eastbound services Platform 1. 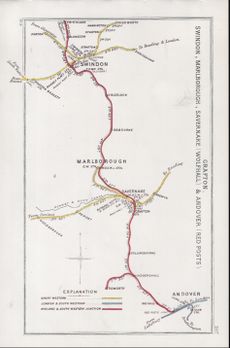 The railway in the vicinity of Swindon station and for a distance of about 20–30 miles in each direction towards Didcot, Bristol, South Wales and Gloucester is controlled from a signal box situation behind platform number 4. The panel box is a Western Region Integra design built by Henry Williams (Darlington) and opened in March 1968. The panel box is due to close in May 2015 and has been secured for preservation at Didcot Railway Centre.[3]

It was announced in December 2005 that stations in the Thames Valley region were to be upgraded.[4]

In August 2014, Network Rail completed the redoubling of the track between Swindon and Kemble in order to improve rail services between London and Cheltenham/Gloucester, and to allow for maintenance work in the Severn Tunnel when Swansea services are diverted via Gloucester. When originally laid in 1842 the line was double-track throughout, however some 12 1⁄4 miles (19.7 km) of the second track were removed in 1968/69.[5] As of July 2008[update], the Office of Rail Regulation was receiving submissions to restore this project (previously omitted) to Network Rail's plans for 2009–2014.[6] The project cost was estimated at £50.2 million and received backing from the South West Development Agency and others[7] but stalled when it was left out of the new Coalition Government's Spending Review in October 2010.[8] Work commenced in January 2013[9] and was completed in August 2014.[10]

On 1 March 2011, Secretary of State for Transport Phillip Hammond announced that plans for electrifying the Great Western main line west from Didcot through Swindon to Bristol and Cardiff had resumed at a planned cost of £704 million.[11] The electrification project had first been announced by the previous Government's Transport Secretary Andrew Adonis, on 23 July 2009.[12]