The Swiss National Day (German: Schweizer Bundesfeier; French: Fête nationale Suisse; Italian: Festa nazionale svizzera; Romansh: Fiasta naziunala Svizra) is the national holiday of Switzerland, set on 1 August. It has been an official national holiday since 1994, although the day had been suggested for the celebration of the foundation of the Swiss Confederacy as early as 1889.[citation needed]

The date is inspired by the date of the Federal Charter of 1291, Pacte du Grutli, placed in "early August",[1] when "three Alpine cantons swore the oath of confederation" (Schwyz, Uri and Unterwalden), an action which later came to be regarded as the foundation of Switzerland."[2] The document is one of several dozen pacts attested for the territory of Switzerland in the period of the mid-13th to mid-14th century. The foundation of the Old Swiss Confederacy had been mostly associated with the Bund of Brunnen of 1315, or with the Rütlischwur, dated to 1307 by Aegidius Tschudi. Pronounced "CHOO-dee."[citation needed]

The Federal Charter of 1291 first assumed great importance in a report by the Federal Department of Home Affairs of 21 November 1889, suggesting a celebration in Bern in 1891 that would combine the city's 700th anniversary with the Confederacy's 600th anniversary.[citation needed]

The date of the Federal Charter came to replace the formerly more prominent, traditional date of 8 November Rütlischwur, 1307 in popular consciousness in the 20th century, specifically after the 650th anniversary celebrations of 1941.[citation needed] 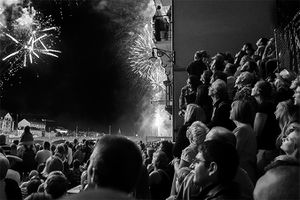 The day of independence is typically celebrated at a local municipality level though certain events draw nationwide attention. Since the mid-19th century, the Rhine Falls near Schaffhausen has illuminated its 25 meter high waterfalls for special events. Beginning in 1920, the waterfall has been regularly lit for the national holiday and since 1966 is now lit only for this holiday. At the historic location of Rütli Meadow above Lake Lucerne, a representational celebration is staged in the location where the legendary pledge of alliance, the Rütlischwur is said to have taken place. In Basel there are fireworks at the Rhine.

The largest Swiss National Day event in the USA is organized and held annually by the Swiss Benevolent Society of New York. Usually held in Manhattan, New York, the event draws thousands of Swiss, Swiss-Americans and Friends of Switzerland from around New York, New Jersey, Connecticut and Pennsylvania. This tradition goes back several decades, and was originally held at their former hospice in Mount Kisco, New York during the 1970s.

Celebrations are also held in Washington, District of Columbia by the Swiss Club of Washington D.C. on the Swiss Embassy grounds, in Monterey County, California at the Swiss Rifle Club and in the Los Angeles suburb of Whittier in Swiss Park. The Swiss Park celebration features Swiss cultural events and games, including a crossbow competition.

In Britain it is also Yorkshire Day, celebrating the county of Yorkshire. Bettys and Taylors of Harrogate, founded in 1919 by a Swiss baker, celebrate both of these days in their 6 cafe-tearooms across Yorkshire. For the National celebration, a festival is usually held every year, 2 Saturdays before the actual 1st of August date to allow an opportunity for Swiss families based in the UK to attend prior to the long August summer break. Typically Swiss National Day is held at University College London, organised by the Swiss National Day London Committee, an independent group of volunteers, with the support of the Swiss Embassy London and other Swiss clubs such as City Swiss Club, New Helvetic Society and Unione Ticinese.